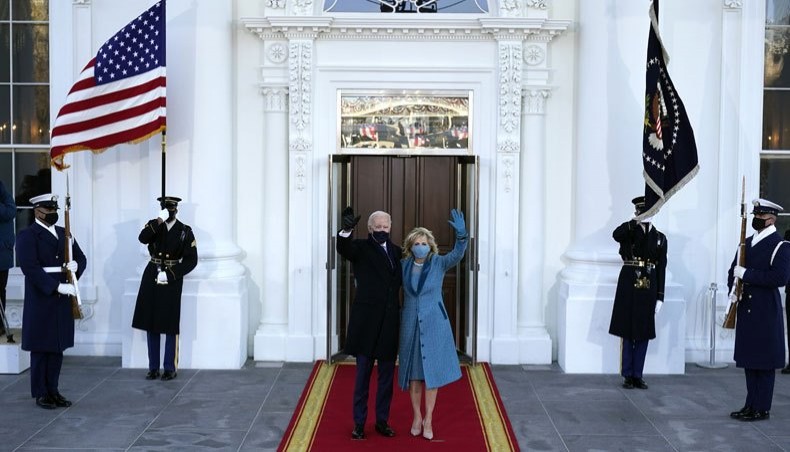 US president Joe Biden and US first lady Jill Biden wave as they arrive at the North Portico of the White House on January 20, 2021, in Washington, DC. --- AFP photo

Joe Biden held his wife Jill’s hand as they strode up their new home’s driveway on Wednesday — which was the only normal thing about the day he became the president of the United States.

Washington was under unprecedented security lockdown, cheering crowds absent because of America’s out-of-control COVID outbreak and Donald Trump had only left the White House hours before.

Biden’s armored black limousine had deposited him at the end of his new street — Pennsylvania Avenue — after his swearing in and a visit to Arlington National Cemetery to pay respects to US military war dead.

But he popped the surreality of the moment with a quip as he made the short walk to the White House with Jill, followed closely by vice president Kamala Harris and her family.

‘It feels like I’m going home,’ the president told an NBC News reporter, who was among the dozens of journalists recording each step from a grandstand.

The sound of military marching bands was still hanging in the air while a group of secret service agents in long coats scanned the scene.

Until shortly before his arrival, red dump trucks with ‘God Bless America’ emblazoned on their sides served as security barriers to Pennsylvania Avenue.

It betrayed the overwhelming security machine for Biden’s extraordinary day, including miles of metal barriers, thousands of masked security forces and a dystopian-looking Washington that would normally be primed to party on Inauguration Day.

‘This looks like the entrance to a military base during war,’ said 42-year-old Joe Brunner from New York City, as he stood across from a checkpoint guarded by armed troops and military vehicles in central Washington.

‘The atmosphere is very strange, it is very un-American’, said 36-year-old Jason Sheffield, adding the security zone and heavy police presence ‘is unethical to freedom’ and ‘very scary.’

For most Americans, the inauguration was watched on social media and TV.

Streets were nearly empty and many businesses in downtown Washington were boarded up, some due to the pandemic and others because of recent violent protests.

In recent years, tens of thousands of people have been close enough to the inauguration ceremony to see the president take the oath of office at the great domed Capitol building that hosts Congress.

The crowd has been massively pared down due to virus contagion concerns — normally 200,000 passes would be distributed among lawmakers to hand out to their constituents.

This year it was one ticket for each of the 535 members of Congress and one guest each.

The number of National Guard troops — which is on top of thousands of police officers — is about three times the roughly 8,000 on hand for Trump’s inauguration.

Those troops would, outside a pandemic year, be guarding crowds on the Capitol grounds and many thousands more packing the roughly 700-acre National Mall.

The 2009 inauguration of Barack Obama, America’s first Black president, drew an estimated 450,000 spectators to the Mall.

Yet some people defied the warnings and strolled the car-less streets to see what they could of America’s handover of power.

‘As soon as Trump’s helicopter took off from the White House, people were up on the roof cheering.’