Hundreds protest in Sanaa against US terrorist label 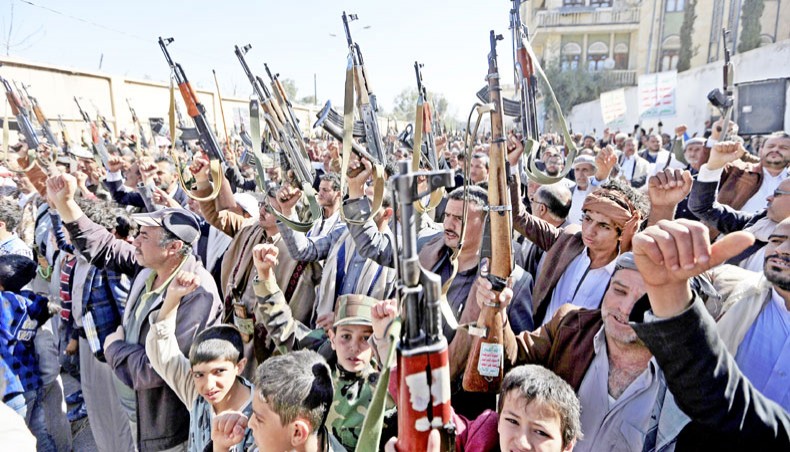 Supporters of Yemen's Huthi movement gesture as they chant slogans during a demonstration against the outgoing US administration's decision to designate the Iran-backed rebels as terrorists, in the capital Sanaa on Wednesday. — AFP photo

Hundreds of supporters of Yemen’s Huthi rebels took to the streets of the capital Sanaa Wednesday to protest against the US labelling their movement as terrorists in one of the final acts of outgoing president Donald Trump.

‘We’ve come out to say the United States is the mother of terrorism and doesn’t have the right to classify anyone as terrorist,’ a demonstrator said, hours before president-elect Joe Biden was to take over from Trump.

Hizam al-Assad, a member of the Huthis’ political office, condemned ‘the continued aggression against the Yemeni people by US administrations’.

Biden’s pick for secretary of state, Antony Blinken, said Tuesday the new administration would review the designation and also end support to the devastating Saudi offensive on the country.

Blinken said he would ‘immediately’ review the labelling by the outgoing administration of the Iran-linked insurgents, fearing the move would worsen Yemen’s humanitarian crisis.

Trump was a staunch ally of Saudi Arabia, offering US logistical help and military sales for its six-year campaign to dislodge the rebels who have taken over much of neighbouring Yemen.

But the United Nations and aid groups have warned the terrorist designation risks worsening the plight of a country where millions depend on aid to survive.

The designation took effect Tuesday, with the Huthis warning they would respond to any action against them.

‘We are ready to take all necessary measures against any hostile act,’ they said in a statement.