India villagers celebrate Kamala Harris ahead of US inauguration 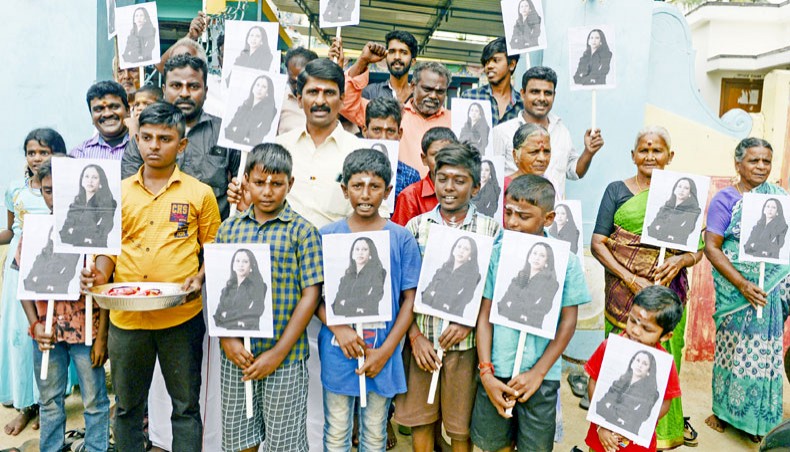 Villagers pose holding photos of US vice president-elect Kamala Harris at her ancestral village of Thulasendrapuram in the southern Indian state of Tamil Nadu on Wednesday. — AFP photo

Villagers from Kamala Harris’s ancestral home in southern India made offerings of fruit, lit firecrackers and prepared hundreds of snacks in celebration of her swearing-in Wednesday as US vice-president.

Thulasendrapuram, where Harris’s grandfather was born, has been in party mode since November when Joe Biden and Harris won the American presidential election.

Her inauguration thousands of miles away in Washington has sparked a day of  — Harris-mania —  in the Tamil Nadu village of 400 people, as children waved pictures of their hero in streets filled with firework smoke.

Jubilant locals laid out hundreds of Chakkali — a popular south Indian spiral snack — shaping some to spell out  — Kamala Harris — , while bowls of sweets were passed around.

Harris, 56, was born in California, but was taken often to India by her mother — breast cancer specialist Shyamala Gopalan — and has spoken about the influence of her grandfather PV Gopalan, a senior Indian civil servant.

At the temple, villagers brought bananas and coconuts, while a bare-chested priest wore a lungi sarong as he offered prayers.

— People are very happy. Celebrations went on as soon as she was elected as the vice president, —  teacher Anukampa Madhavasimhan told AFP.

The village’s main temple has drawn a steady stream of visitors praying for the vice president-elect, while posters depicting her and Biden now decorate roads.

— She belongs to this village and we are very proud of her, —  said retired bank manager Krishna Murthy.

— And of course she has come on her own merit. It is not because we have done something for her. —

The village plans to hold a live screening of the inauguration, which will take place late Wednesday in India.

In New Delhi, academic Balachandran Gopalan—Harris’ uncle—said he was proud of her achievements, but disappointed that he would not witness her inauguration in person.

— What she has achieved is commendable, —  he added.

Harris is already a trailblazer as California’s first Black attorney general and the first woman of South Asian heritage elected to the US Senate.