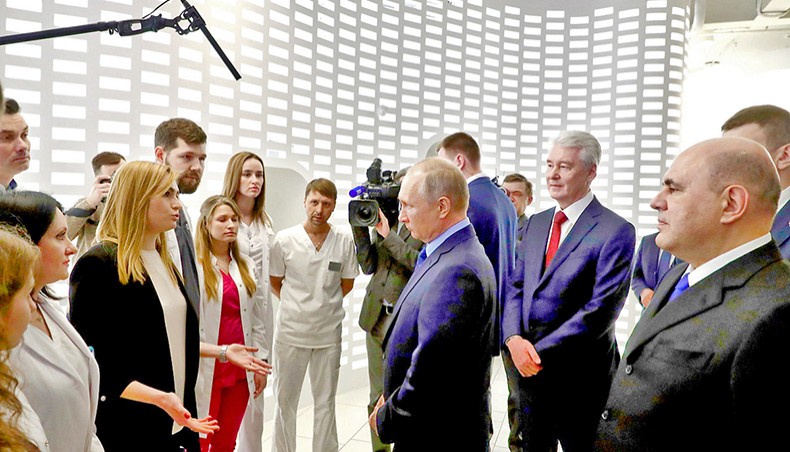 RUSSIA has developed its own vaccine, which is cheaper than those currently available on the market. It is also easier to handle because it requires less refrigeration and provides a vaccine efficacy of 91.4 per cent.

These claims are credible because Russia has the technical capabilities, the expertise and the experience in vaccine development. The downside is that you just have to believe in it, because there’s no way of knowing. And that is precisely why this may not become a success story after all.

The premature approval of the Sputnik V vaccine for reasons of prestige, the as-yet-incomplete third test phase and the lack of disclosure of the results to date are generating scepticism not only internationally but also in Russia itself. This increases the risk that a presumably good vaccine will not gain the necessary confidence to be used successfully within Russia and worldwide.

So far there are supply contracts with more than 10 countries for 1.2 billion doses. However, since approval in August, Russia has produced only 1.5 million. As it stands now, capacities are far from sufficient to meet delivery obligations promptly.

New manufacturing complexes were completed in a short time and are expected to enable a massive increase in production from February. In addition, contracts for the manufacture of the vaccine were concluded with India, Brazil, China and South Korea. Efforts are also being made to cooperate with France and Germany.

It would indeed be a good opportunity, after all of the recent conflicts, to re-establish concrete cooperation that would be beneficial for both bilateral relations and the rest of the world. That is, as soon as the vaccine is approved in the European Union.

The lack of confidence in domestic production, however, is also noticeable in the Russian population. With one million people vaccinated and a vaccination rate of around 0.69 per cent, the country is not in a bad position.

But it has been primarily medical staff, teachers and officials who have been vaccinated. Among the general population, the willingness to be vaccinated has been rather low. According to a survey by the Levada Institute, 58 per cent of the population want to forego the vaccination for the time being. Most of the respondents said the reason for their reluctance was that they wanted to wait and see what side effects the vaccine would have.

Another likely reason is the information policy on the pandemic. Officials have always emphasised that Russia would get through the pandemic much better than other countries. Low official fatality rates (which are massively below the figures for excess mortality) and the very cautious protective measures with only minor interventions in everyday life are leading to a certain degree of carelessness. A large part of the population are thinking: ‘Why vaccinate, why take a risk, when it’s not all that bad?’

The state is now beginning to take countermeasures. A vaccination certificate is to be issued, although it is not yet clear what the resulting benefits will be. In Moscow, however, one can already surmise.

Groups of people who were deprived of their free access to public transport at the beginning of the second wave will be able to use it again — as long as they have proof of vaccination. Further incentives will follow to achieve the target vaccination rate of 70–80 per cent by the end of the year. By then, we will know for sure how good the vaccine really was.

WHERE vaccination is concerned, the United Kingdom is leading the way. The BioNtech vaccine was released in early December and the vaccine developed by AstraZeneca and Oxford University made available in early January.

A centralised vaccination campaign is underway to immunise at-risk groups as soon as possible and substantial progress has already been made. As of the first week of January, over a million Britons have been vaccinated.

Delaying the second vaccination is currently being considered so as to achieve a higher number of initial inoculations. By mid-February, around 14 million people from high-risk groups are expected to have received their first injection and thus be protected.

This is urgently needed because, unfortunately, the United Kingdom is also leading the way in terms of infection rates, hospital patients and deaths.

Still, for the government of the pathologically optimistic Boris Johnson, the early start of vaccination presents an opportunity that should not be passed up. ‘This is not a race, but I’m just saying that we have vaccinated more people in the UK than all of Europe put together.’

The prime minister’s choice of words on January 3 has since then been used by many Tories and nicely illustrates the intersection of Brexit and the COVID-19 crisis.

Education minister Gavin Williamson was considerably more crude here when he attributed the early approval to the fact that they simply have better people than France, Belgium and the United States and are simply a better country.

In reality, the situation is a bit more nuanced. The British decision was based on European law and only made use of the option of emergency approval. Although this is quicker, it does impose liability risks on the authorising state — a fact that rarely appears in the British press.

Vaccine sceptics use it for their own purposes and try to exploit the current situation in their favour. They are benefitting from the fact that anti-vaxxers in the UK have around five million followers on social media and can count on a long-standing hard core of vaccine sceptics. Incidentally, one prominent name in these circles is Corbyn, even if it’s only Piers Corbyn, the embarrassing brother of former Labour leader Jeremy Corbyn.

At the same time, doubts are growing as to whether the government, which so far has not exactly distinguished itself during the COVID-19 crisis, will be able to carry out the logistical mammoth task of mass vaccination.

With the current third wave and the virus’s mutation, the NHS healthcare system is overburdened, the staff has been stretched thin by the constant workload since March and the government is still planning to freeze salaries. Johnson is threatened with yet another case of his ‘over-promising.’

That should put him under even more pressure. Even if it’s not a race, if Johnson still has not gained ground by spring, questions about his political future are likely to be raised.

VACCINATION against the coronavirus has begun in Poland as well. The head nurse of a Warsaw hospital received the first vaccination on December 27. This is in line with the vaccination strategy of the Polish government, with medical personnel being in the priority ‘group zero.’

About 900,000 people are to be vaccinated by the end of January and 500,000 of them have registered for vaccination so far.

However, the launch of the vaccination programme was not without problems. The media are reporting on hospitals encountering complications in inoculating the delivered doses of the sensitive Pfizer/BioNtech vaccine in an effective way. Some hospitals had initially received more vaccine than they could use or store.

Nevertheless, in comparison with the rest of Europe, Poland is not doing badly. With 0.37 vaccinated persons per 100,000 residents (as of January 6), the country is statistically at the European average. Only two significantly larger countries, Germany and Italy, have administered more vaccinations than Poland.

The real test of the vaccination system will come at the end of January, because that is when mass vaccinations are scheduled to begin. ‘Group 1,’ made up of senior citizens, residents of nursing and retirement homes, ‘uniformed services’ (police, fire brigade, armed forces, etc.) and teachers, comprises approximately 10 million people.

A shortage of vaccines is not yet an issue in Poland. The country is supplied through the EU’s joint purchasing programme and currently around 300,000 doses are arriving each week.

When the Moderna vaccine is delivered, 400,000 doses of that vaccine per week could be added. If the 6,000 vaccination points work as planned, the country could even provide an estimated four million vaccinations per month — far more than the number of vaccine doses that will be available from the EU purchase programme.

Accordingly, since Christmas the Warsaw government has been engaged in discussion with Pfizer/BioNtech about additional national purchases. The suggestion to open a second, national procurement line is said to have come not least because of corresponding German efforts. The results of these negotiations are to be announced next week.

In the public perception, however, the start of the vaccination campaign was overshadowed by a ‘scandal’ surrounding the vaccination of around 20 more or less well-known figures from Warsaw’s political, media and cultural scene.

These cases of first vaccinations, which are of scant relevance to the healthcare system, include the former prime minister and current member of the European Parliament Leszek Miller, the pro-opposition actress Krystyna Janda and two directors of TVN, a private TV station critical of PiS, the ruling Law and Justice party.

They received the offer to vaccinate from the director of the Warsaw University Hospital, while medical staff from this facility are said to be still awaiting their own vaccinations. The pro-government media, of course, did not miss the opportunity to create a scandal around the inherent privilege of Warsaw’s in-crowd — and in an equally automatic response, the liberal camp defended the vaccine recipients.

The social perception of this relatively irrelevant event was perhaps best summed up by the writer Szczepan Twardoch, who became famous in Germany for his novel The Boxer. He said he could certainly understand the behaviour of those who had been vaccinated — after all, it’s a matter of life and death. What he finds despicable, however, is the defence of this behaviour by the media and cultural elite: ‘It is based on the conviction that there are people whose existence is more important and valuable than that of others and of course these are people of their class who share the same lifestyle and social background.’

Thus, the underdog populism of the PiS party, which has become less and less plausible of late, is likely to have received a strong jab in the arm itself in the past few days.

Consortiumnews.com, January 18. Peer Teschendorf has served as the director of the offices of the Friedrich-Ebert-Stiftung in the Russian Federation since 2018. Christos Katsioulis currently heads the FES’s London office. Ernst Hillebrand is director of the FES office in Warsaw.