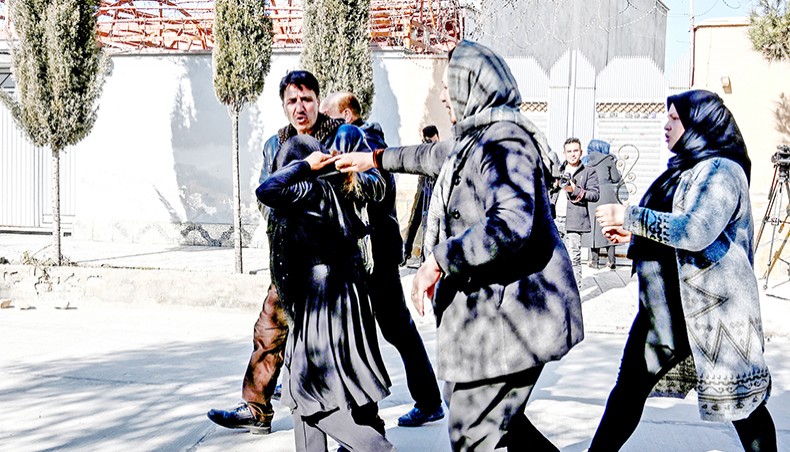 Relatives of the victims arrives at the site after gunmen shot dead two Afghan women judges working for the Supreme Court in Kabul on January 17.— Agence France-Presse/Wakil Kohsar

THE two women judges shot dead in Kabul last Sunday were the latest victims of the targeted killings that have swept Afghanistan amid the virtually stalemated peace talks between the government in Kabul and the Afghan Taliban. Those killed in the last few months in what is described as a systematic massacre include journalists, human rights activists, and members of civil society. The latest cycle of violence raises questions about the prospect of peace returning to the war-torn country as the American withdrawal seems imminent.

The incidence of high-profile murders has significantly increased with the further reduction of American troops. It has intensified the factional battle inside Afghanistan. Last week, the Pentagon announced it had cut troop levels in Afghanistan to 2,500. It is the lowest number of American troops since the start of the war two decades ago.

Some analysts see the targeted killings as a throwback to the late 1980s when several members of the Afghan intelligentsia in exile were killed in the fratricidal conflict among various Afghan Mujahedeen groups following the withdrawal of the Soviet forces.

Many of those killed in recent weeks have actively been campaigning against rampant violence and rising human rights violations. High-profile women like the two female judges are particularly vulnerable to this systematic move to eliminate the new generation of Afghan intelligentsia.

Curiously, no group has claimed responsibility for the killings but the footprints are too obvious. Although the Taliban have denied they were involved in the attacks they remain the prime suspect. President Ashraf Ghani has accused the Taliban of launching an ‘illegitimate war and hostility’.

But other insurgent groups such as the militant Islamic State group and Afghan factions opposed to the ongoing peace process are also believed to be involved in the killings aimed at spreading terror and silencing dissenting voices. There have also been allegations of involvement of elements within the Afghan government in the attacks in order to settle scores with rivals.

This relatively new pattern of targeted killings cannot be seen in isolation. There has been a marked rise in violence after the historic Doha peace accord between the United States and the Taliban in February last year that has raised the possibility of an end to the long war in Afghanistan. The latest wave of violence has taken a huge toll on the civilian population.

A recent report of the US special inspector general for Afghanistan reconstruction shows there has been up to a 43 per cent rise in civilian casualties after the February agreement. It is not just the Taliban but Afghan security forces too that have been responsible for the attacks causing civilian deaths. The escalating violence has also cast a long shadow over peace efforts.

The killing of the two female judges came as the Afghan government representatives and the Taliban resumed peace talks in Doha after a 20-day break to discuss the future political set-up in the country. In the previous round, the two sides had reached an agreement on a framework for structured talks. The agreement on procedure cleared the way for the two sides to turn their focus on a political roadmap and a long-term nationwide ceasefire.

But there has not been any significant progress made in the latest round of talks. The two sides have different sets of priorities for the talks to proceed. While the Afghan government insists on a reduction in violence, the insurgents demand the release of the group’s remaining jailed fighters, along with the removal of Taliban leaders from the UN blacklist. Reaching a consensus will not be easy as both sides are sticking to their respective positions.

Meanwhile, the absence of several senior members of the Taliban negotiating team when the Doha meetings resumed earlier this month seems to have contributed to the deadlock. The absentees include the deputy head of the Taliban team Mullah Abdul Ghani Baradar who reportedly stayed back in Pakistan after an official visit.

The political transition in Washington also seems to be a factor in the slow progress on the intra-Afghan dialogue. Both sides apparently wanted to see what the contours of the new administration’s Afghan policy would be like. Although there is no likelihood of any major shift in US policy, some elements in the Afghan government still have hopes that the Joe Biden administration would review the plan for a complete withdrawal of American troops from Afghanistan.

Afghanistan’s second vice-president Sarwar Danish has joined some Afghan lawmakers in urging president-elect Biden to review the peace agreement with the Taliban in order to increase pressure on the insurgents. While there is no possibility of any reversal in the US plan for a complete withdrawal of troops, the new administration may increase the pressure on both the Taliban and the government in Kabul to move back from their respective rigid positions. Pakistan will also be under more pressure from the Biden administration to persuade the Taliban to agree to a long-term ceasefire.

It also remains to be seen who the new administration will appoint as special US envoy for the Afghan peace process in place of Zalmay Khalilzad. It will be hard to replace him. He is of Afghan origin and has a personal rapport with the Taliban. He helped reach the Doha agreement. Although his relationship with president Ghani has not been a comfortable one, he got along with Pakistan’s civil and military leadership. The main task for the new envoy would be to help break the existing deadlock in the intra-Afghan peace talks as well as get the Taliban to agree on a viable political solution. But with the rising level of violence, prospects of peace in Afghanistan remain bleak.

Dawn.com, January 20. Zahid Hussain is an author and journalist.