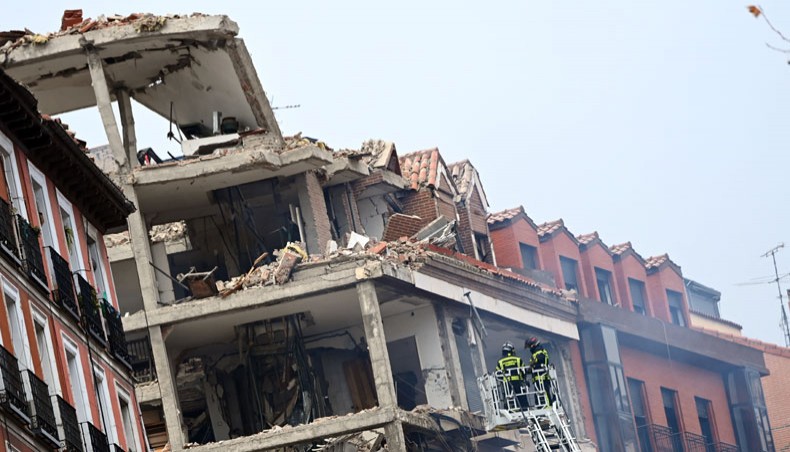 Firefighters on a ladder approach a damaged building in Madrid on January 20, 2021 after a strong explosion rocked it. — AFP

At least two people were killed on Wednesday when a huge explosion ripped through a building in Madrid, in what appeared to be caused by a gas leak, officials said.

The emergency services tweeted that two people had died, while another person was seriously injured and six had suffered light injuries in the blast.

‘It seems there was a gas explosion in the building,’ mayor Jose Luis Martinez-Almeida told reporters at the scene, where hundreds of police and rescuers filled the streets.

The incident occurred in a building next door to an elderly care home, but no-one there was hurt, La Paloma residence said in a statement on its website.

Images from the scene showed the walls on the top four or five storeys had been blown out, with debris littered far and wide.

Nine fire crews and 11 ambulances were dispatched to the scene with hundreds of police and rescuers filling the street, which was completely closed off to traffic and pedestrians, AFP correspondents said.

‘At least four floors have been affected by the explosion in the building in Calle Toledo,’ the emergency services tweeted.

Images broadcast on Spanish television showed cars destroyed by the blast and smoke billowing from the top floor of a building.

‘The noise was very loud, very loud, really,’ Lorenzo Fomento, a 43-year-old Italian salesman who was working from home at a nearby apartment, told AFP by telephone.

‘I never heard something as loud before,’ he added.