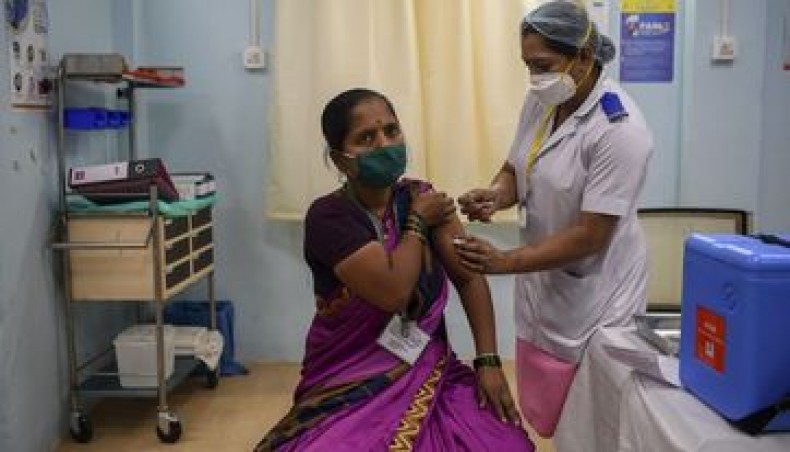 A medical worker inoculates a colleague with a COVID-19 coronavirus vaccine at the Rajawadi Hospital in Mumbai on January 19, 2021. -- AFP photo

India’s homegrown vaccine developer Bharat Biotech has warned people with weaker immunity and other medical conditions that include allergies, fever, or a bleeding disorder to consult a doctor before getting the shot — and if possible avoid the vaccine.

The vaccine by Bharat Biotech ran into controversy after the Indian government allowed its use without concrete data that showed it was effective in preventing illness from COVID-19.

Tens of thousands of people have been given the shot in the past three days after India started inoculating its health care workers last weekend in what is likely the world’s largest COVID-19 vaccination campaign.

The company on Tuesday said those receiving jabs should disclose their medical conditions, medicines they are taking and any history of allergies.

It said symptoms of a severe allergic reaction in vaccine recipients may include difficulty in breathing, swelling of the face and throat, rapid heartbeat, body rashes, dizziness and weakness.

India on January 4 approved the emergency use of two vaccines, one developed by Oxford University and UK-based drugmaker AstraZeneca, and another by Bharat Biotech. But the regulator took the step without publishing information about the Indian vaccine’s efficacy.

Most hospitals in India are inoculating health care workers with the AstraZeneca vaccine. But the turnout, particularly in those hospitals where the Bharat Biotech vaccine is being administered, has been relatively low, health officials said.

Hospitals in New Delhi that have been administering the Bharat Biotech vaccine have seen many doctors hesitate to take the shot.

India’s health ministry on Monday said that 381,305 people have been vaccinated in the country.