Myanmar again promises to take back Rohingyas from Bangladesh 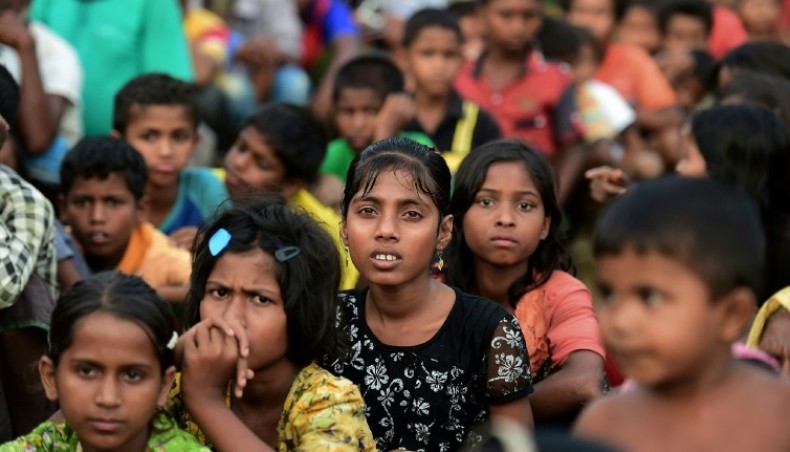 Rohingya children at a camp in Bangladesh. — AFP file photo

Myanmar once again agreed on Tuesday to take back the forcibly displaced Rohingya people to Rakhine from camps in Bangladesh by reemphasising that the prospective returnees should abide by the laws of the country and avoid engaging in ‘destabilising activities’ after their return.

China, on the other hand, proposed that the process of repatriation should be kept limited to a bilateral mechanism developed by Bangladesh and Myanmar, while Bangladesh sought engagements of international partners in Rakhine to make the repatriation sustainable.

The three sides expressed their intent in a trilateral meeting with the participation of top diplomats of Bangladesh, China and Myanmar held virtually when Bangladesh sought to start repatriation of the Rohingya people physically by June this year depending.

Two attempts to start repatriation failed in 2018 as not a single Rohingya expressed willingness to go back to Myanmar citing the absence of an environment conducive to voluntary repatriation and the lack of security in Rakhine State of Myanmar.

Myanmar expressed its intention to take back Rohingyas to Rakhine while stressing the need for the returnees to abide by local laws, foreign secretary Momen said at a press briefing in Dhaka.

Myanmar also sought Bangladesh’s support on containing potential resurgence of ARSA, an armed outfit of Rakhine people, after the repatriation of the Rohingya people, said Momen, adding, ‘They reminded of the zero tolerance policy against allowing any elements that might remain active in the neighbouring countries using Bangladeshi lands.’

Luo Zhaohui iterated China’s position that the issue of the displaced people from Rakhine ‘is ultimately a bilateral one, therefore, bilateral negotiation and consultation between Bangladesh and Myanmar should be prioritised’ to find a durable solution, according to Chinese embassy in Dhaka.

The international community, China included, should play a constructive role instead of further complicating the situation, Momen added.

Describing the meeting as ‘a positive step’ Bangladesh foreign secretary also said, ‘We are cautiously optimistic’ that repatriation would start ‘in the second quarter of the current year.’

‘There is no alternative to start the process for repatriation at the earliest, as the number of potential returnees are increasing with the birth of about 90,000 children in last three years,’ he said.

Momen said that the three sides agreed to restart the process of repatriation in line with the bilateral arrangements agreed upon by Bangladesh and Myanmar and asked the working group of the tripartite mechanism to hold a meeting by February in an extended form with the participation of director general- and ambassador-level officials of respective sides, the foreign secretary said.

The meeting emphasised the need for expediting the repatriation process by verifying the Rohingya people by the Myanmar government from the lists sent by Bangladesh.

Following Bangladesh’s proposal, the meeting decided to launch a pilot project by forming groups of Rohingyas who belong to certain localities or a cluster of villages in Rakhine based on the list of people cleared by the Myanmar authorities for starting the much-awaited repatriation.

Bangladesh and Myanmar agreed in the meeting to install a hotline at the level of director general of their respective foreign ministries to supervise the repatriation process.

Bangladesh re-emphasised the need for showing flexibility by the Myanmar government.

Following Bangladesh’s request, the Chinese and the Myanmar governments agreed to hold the next foreign secretary-level meeting in February physically in Cox’s Bazar or Dhaka in Bangladesh.

The foreign ministers of China, Bangladesh and Myanmar would also meet ‘if required,’ Momen said.

He also said that voluntariness of the returnees ‘is the key’ and the Myanmar government should create an environment conducive for the displaced people to return to their homeland with the assurance of the rights of the returnees, their livelihood, safety and security.

Momen said, ‘We would not want a short-lived repatriation.’

The involvement and the constructive role of the international community in general, China, India, Japan, ASEAN and the UN agencies would also be crucial for ensuring sustainability, he pointed out.

The foreign secretary said that ‘some vested interest groups do not want reparation and they are active in the camps’ and added that the Bangladesh government would take steps to contain activities of eight or nine armed criminal gangs engaged in smuggling, trafficking and extortion inside in the Rohingya camps after completing construction of the barbed wire fence around the camps.

The military-controlled Myanmar government cleared only 27,640 Rohingyas in the last three years for taking them back while rejecting about 14,400 members of the community on insubstantial grounds, as the Bangladesh side sought clearance for 8,29,036 Rohingyas so far for sending them back to Myanmar.

Some 8,60,000 Rohingyas, mostly women, children and aged people, entered Bangladesh fleeing unbridled murder, arson and rape during ‘security operations’ by Myanmar military in Rakhine, what the United Nations denounced as ethnic cleansing and genocide, beginning from August 25, 2017, according to the UN agencies.