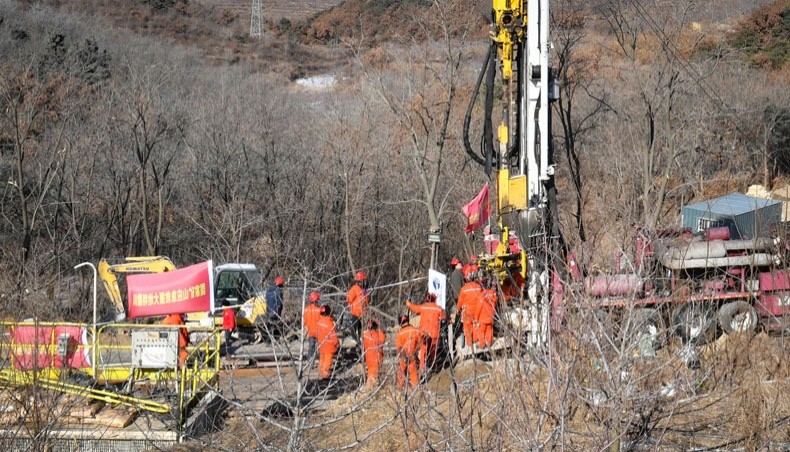 Members of a rescue team work at the site of a gold mine explosion where 22 miners are trapped underground in Qixia, in eastern China's Shandong province on January 18, 2021. -- AFP Photo

Twenty-two workers have been stuck 540 metres underground at the Hushan mine near Yantai in east China’s Shandong province after an explosion damaged the entrance.

After days without any signs of life, some of the trapped miners managed to send up a note attached to a metal wire which rescuers had dropped into the mine on Sunday.

Pleading for help, the handwritten message said a dozen of them were alive but surrounded by water and in need of urgent medical supplies.

Several of the miners were injured, the note said.

A subsequent phone call with the miners revealed 11 were in one location 540 metres below the surface with another — apparently alone — trapped a further 100 metres down.

The whereabouts and condition of the other 10 miners is still unknown.

Rescuers have already dug three channels and sent food, medicine, paper and pencils down thin shafts — lifelines to the miners cut into the earth.

But progress was slow, according to Chen Fei, a top city official.

‘The surrounding rock near the ore body is mostly granite that is very hard, resulting in slow progress of rescue,’ Chen told reporters on Monday evening.

‘There is a lot of water in the shaft that may flow into the manway and pose a danger to the trapped workers.’

Chen said the current food supply was only enough for two days.

A telephone connection has also been set up.

Footage from state broadcaster CCTV showed dozens of rescuers clearing the main return shaft, while cranes and a massive bore-hole drill was used to dig new rescue channels to reach the trapped miners.

Rescue teams lost precious time since it took more than a day for the accident to be reported, China Youth daily reported citing provincial authorities.

Both the local Communist Party secretary and mayor have been sacked over the 30-hour delay and an official investigation is under way to determine the cause of the explosion.

Mining accidents are common in China, where the industry has a poor safety record and regulations are often weakly enforced.

In December, 23 workers died after being stuck underground in the southwestern city of Chongqing, just months after 16 others died from carbon monoxide poisoning after being trapped underground at another coal mine in the city.