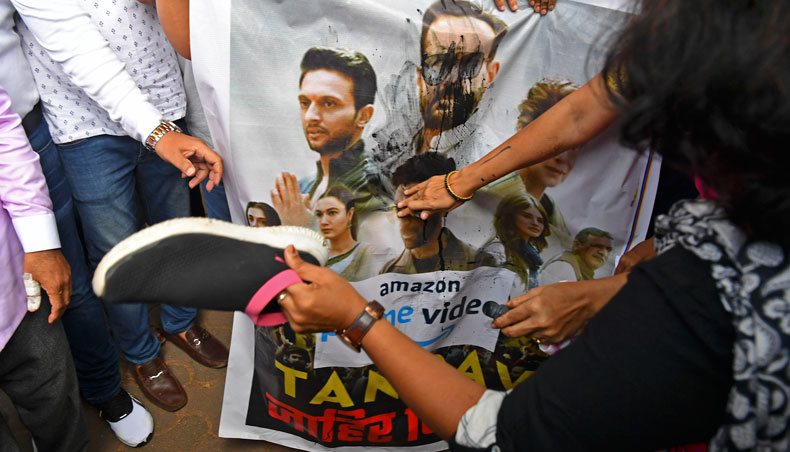 Supporters of India’s ruling Bharatiya Janata Party pour ink and beat a poster with footwear during a protest against a new web series ‘Tandav’, in Mumbai on January 18, 2021. — AFP photo

The cast and crew of a popular streaming series starring Bollywood megastar Saif Ali Khan have apologised after ruling politicians called the show insensitive to Hindus.

The Amazon Prime drama ‘Tandav’ — loosely compared to the US series ‘House of Cards’ — drew criticism from members of the Hindu-nationalist Bharatiya Janata Party after its Friday release.

Several BJP politicians called for the show to be removed, saying it was ‘deliberately mocking Hindu gods’ and disrespecting religious sentiments.

One of the criticised scenes depicts a university play in which Hindu god Shiva talks about freedom, a rallying cry from last year’s anti-government protests in the capital.

The Ministry of Information and Broadcasting told the cast and crew it received ‘a large number of grievances and petitions with serious concerns and apprehensions’ over the series, director Ali Abbas Zafar wrote in a post on Instagram and Twitter on Monday.

‘‘Tandav’ is a work of fiction and any resemblance to acts and persons and events is purely coincidental,’ he added in a statement.

‘The cast and crew of ‘Tandav’ unconditionally apologise if it has unintentionally hurt anybody’s sentiments,’ he added.

Police were seen stationed outside Saif’s Mumbai home on Sunday amid the row, the Hindustan Times reported.

Leading streaming platforms, including Netflix, Amazon and Disney’s Hotstar, have expanded their presence in the country of 1.3 billion, including by commissioning local content.

The streaming TV services are not subject to the country’s notoriously fussy censor boards which regularly cut scenes.

But there have been growing calls, particularly from BJP politicians, for the shows to be subject to the same scrutiny.

The most recent controversy involved the BBC’s TV version of Vikram Seth’s epic bestselling novel, ‘A Suitable Boy’, which is streaming on Netflix, over a scene where a Hindu girl kisses a Muslim boy in front of a Hindu temple.

A state BJP politician in November filed a complaint to police saying the show had hurt Hindus’ religious sentiments.