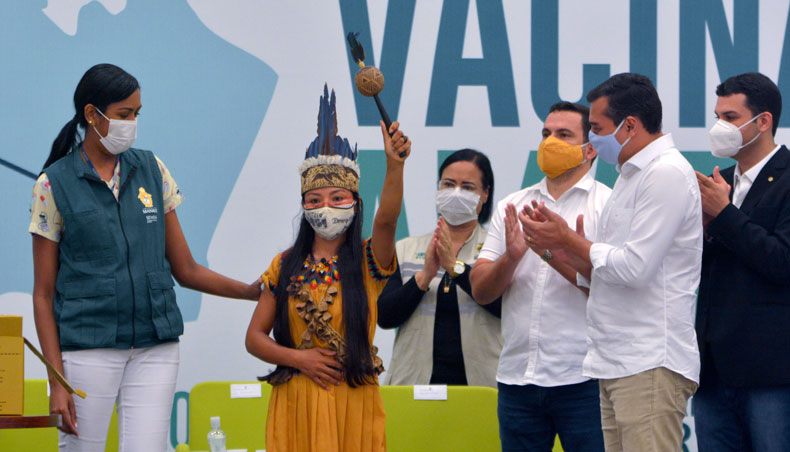 Witoto’s indigenous nurse Vanda Ortega is seen showing her vaccine certificate after becoming the first person to be inoculated with the Sinovac Biotech’s CoronaVac vaccine against COVID-19 in Manaus, Amazonas state, Brazil, on January 18, 2021. — AFP photo

Countries around the world stepped up their coronavirus vaccine campaigns Monday, with Russia offering jabs to all citizens, while an independent probe found fault with the early response to the pandemic.

Both the World Health Organisation and Beijing could have acted faster when COVID-19 first surfaced in China a year ago, the Independent Panel for Pandemic Preparedness and Response concluded in a report.

It added that countries where the virus was likely to spread should have put containment measures in place immediately.

With the global death toll now past two million, many governments are betting on mass vaccination to throttle the pandemic, while tightening lockdown measures at the same time.

Nationwide rollouts from Brazil to Azerbaijan were getting underway Monday, while Britain and France were widening inoculations to all elderly people.

In Russia, the government invited all citizens to sign up for the home-grown Sputnik V jab – but while it was widely available in Moscow, many regions reported receiving only between 5,000 and 15,000 doses in the country of 146 million.

India’s campaign was also facing teething problems as it emerged that almost a third of the 300,000 people invited for a shot on the opening day didn’t turn up.

‘These are initial days and we understand people are waiting to see how the procedure pans out,’ said Suneela Garg, a member of the coronavirus task force for New Delhi.

‘These numbers will go up as confidence is strengthened. And for that, we have to tackle misinformation,’ she added.

Authorities worldwide have been mounting public information campaigns to address concerns over vaccine safety, and in the face of powerful online anti-vax movements.

After 33 elderly people who had received a first dose died in Norway, authorities there stressed there was no proven link between the jabs and the deaths. They recommended, however, that doctors consider patients’ frailty before immunising them.

For Syrian refugee Fatima Ali, receiving her vaccination was cause for tears of joy.

‘It’s a gift from God,’ the 70-year-old said as she was vaccinated outside a clinic in Mafraq, Jordan.

WHO chief Tedros Adhanom Ghebreyesus has warned rich countries against hogging doses while the poorest suffer, blasting vaccine manufacturers for chasing regulatory approvals there rather than seeking global approval.

‘I need to be blunt. The world is on the brink of a catastrophic moral failure,’ Tedros said, adding, ‘And the price of this failure will be paid with lives and livelihoods in the world’s poorest countries.’

Israel, praised for one of the world’s fastest rollouts, has secured a significant stock of vaccines partly by pledging to quickly share data on its impact with Pfizer, according to an agreement with the drug company seen by AFP.

In the US, where nearly 400,000 people have died, president Donald Trump and president-elect Joe Biden wrangled over travel bans as the country endures a rocky transition of power.

Trump announced that the US ban on travellers arriving from much of Europe and Brazil would be lifted on January 26 — after he has left power — but Biden’s team quickly shot back saying the ban would stay.

Nearly three million people in China’s north-eastern Jilin province were put under lockdown Monday after a surge in cases, while Malawi introduced an overnight curfew.

Globally, travel remains at a trickle of its usual pace – and there were signs Monday of the price being paid by companies and countries reliant on tourism.

Disneyland Paris — Europe’s biggest tourist attraction — announced it was delaying its reopening until April, while train operator Eurostar made a desperate plea for British state support.

‘Without additional funding from government there is a real risk to the survival of Eurostar,’ the cross-Channel service said.

Soaring public debt in Greece, Spain and Italy was on the agenda at eurozone finance ministers’ talks Monday – with the highly tourist-dependent nature of these economies compounding the problem.

Smaller business owners are also fed up after months of restrictions that have left them struggling for survival.

In Poland there had been plans for a major campaign of civil disobedience in tourist-reliant ski resorts, but while some restaurants reopened in defiance of the rules, most businesses ultimately decided to stay shut.

In Japan meanwhile, there are growing doubts on whether the postponed Tokyo 2020 Olympics can go ahead in July.

In another example of the remaining hurdles facing travellers, Britain imposed a 10-day isolation on all arrivals, who will have to provide a negative COVID-19 test taken at most 72 hours before departure.

Despite the doom and gloom, in Milan fashionistas were dreaming of life beyond COVID-19, with a digital edition of Men’s Fashion Week offering up colourful collections for Winter 2021.