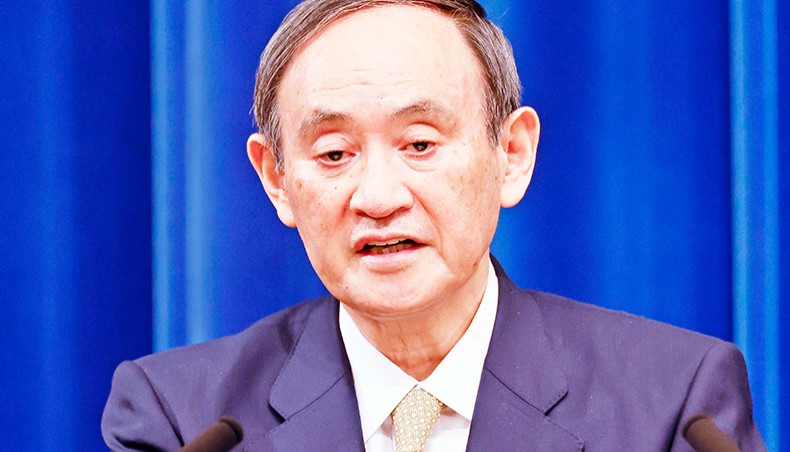 Suga, who was speaking at the opening of a new parliament session, has only been in office since September, but has seen approval ratings nosedive over his government’s handling of a third wave of infections.

The latest wave in Japan and abroad has also cast doubt on whether the pandemic-postponed Tokyo 2020 Olympics can go ahead this year, but Suga repeated he was still committed to holding the Games as ‘proof of mankind’s victory over the virus’.

‘To protect the lives and health of the Japanese people... I will get the situation back to normal as soon as possible,’ Suga said in a policy address to the Diet as it opened for a 150-day session.

The greater Tokyo region and several other parts of Japan are under a virus state of emergency set to last until February 7, but the government has been accused of waiting too long to impose the measure and sending mixed messaging on the situation.

A weekend survey by the Yomiuri Shimbun newspaper showed approval for Suga’s cabinet sank six percentage points from December to 39 per cent, against a disapproval rate of 49 per cent.

The latest readings compare with a 74 per cent approval rating for his government in the same survey when he took office in September.

A poll from private broadcaster ANN over the weekend showed similar results, with approval dropping to 34.8 per cent from December.

Suga’s government has stressed the need to balance infection measures against economic impact, but was slammed for continuing to back a domestic travel campaign even as infection rates spiked.

He said Monday his government would soon submit legislation intended to toughen the rules during a state of emergency — including allowing fines for businesses that flout closure requests.

Reports suggest the government may also seek legal changes that would allow fines or even prison sentences for those who refuse hospitalisation or contact tracing after testing positive with the virus.

Despite the recent spike, Japan has so far seen a comparatively small COVID-19 outbreak, with around 4,500 deaths overall.

The government has secured sufficient vaccine doses for all its 126 million residents, but so far just Pfizer has applied for approval, and the jabs are not expected to start until late February.