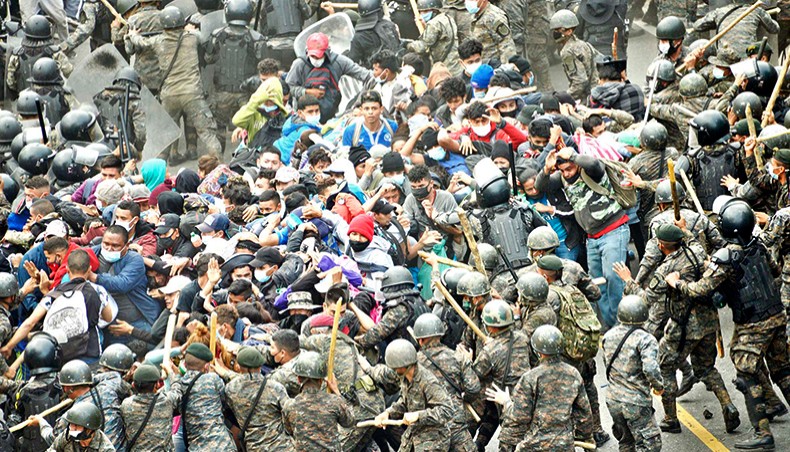 Security forces surrounded the migrant caravan on a road in the southeastern Guatemalan town of Vado Hondo, near the border with Honduras.

Amid the deafening explosions of gas and smoke cannisters, many migrants retreated, with some waiting nearby to make a new attempt later, while others fled into nearby mountains.

Several dropped their sparse belongings as they rushed from harm’s way.

Uniformed soldiers with clubs and plastic shields beat back one group trying to break through a fence.

A regional health official, who did not give her name, said several migrants were struck and injured.

In the name of curbing the spread of the coronavirus, security forces are under strict orders not to let anyone through.

Saying they are desperate to escape poverty, unemployment, gang and drug violence and the aftermath of two devastating hurricanes, the migrants set out from Honduras last week, aiming to cross Guatemala and Mexico and reach the US — an arduous journey of thousands of kilometres.

‘They have no heart, we are risking our lives,’ lamented Dixon Vazquez, 29, who begged the Guatemalan authorities to let the group continue.

‘There is no work in Honduras,’ he said.

Dania Hinestrosa, a 23-year-old domestic worker travelling with her daughter, said she had left behind another child of three and twins aged four.

‘We have no work, nor food, so I decided to go to the United States,’ Hinestrosa said.

But Guatemala migration head Guillermo Diaz insisted Saturday the group ‘will not be able to pass’ and urged the migrants to turn back.

Anyone wishing to enter Guatemala would need legal travel documents and a negative COVID-19 test, he said in a video, and claimed to have intelligence information suggesting that members of organised crime gangs had infiltrated the migrant group.

Migration authorities said nearly 1,400 people in the caravan had been returned to Honduras by Sunday, including 192 children.

Officials said at least 6,000 people had arrived in Vado Hondo out of some 9,000 who left Honduras in recent days.

A first group of men, women and children — many wearing masks due to the pandemic — pushed their way Friday past police on the border at El Florido, an AFP correspondent said.

A police official said the initial group were allowed into Guatemala because there were many families with children. They said officers feared tear gas could cause casualties.

Border agents asked the migrants for their papers — and proof of negative coronavirus tests — but appeared to let many through who did not meet those requirements.

They have been stuck at Vado Hondo since Saturday night, their progress slowed by the mountainous terrain.

The Guatemalan government in a statement denounced what it said was a violation of its national sovereignty, and urged Honduras to ‘contain the massive departure of its inhabitants, through permanent preventive actions.’

The migrants are hoping for a welcome in Joe Biden’s America after years of tough anti-immigrant policies under Donald Trump, but US authorities have already warned off the group.

Mark Morgan, acting commissioner of US Customs and Border Protection, urged the migrants last week not to ‘waste your time and money.’

The US commitment to the ‘rule of law and public health’ is not affected by the change in administration, he said in a statement.

Guatemala, Mexico and Honduras have an agreement with the US to stop north-bound migratory flows.

More than a dozen caravans, some with thousands of migrants, have set off from Honduras since October 2018.

But all have run up against thousands of US border guards and soldiers under Trump, who has characterized some immigrants from Mexico as ‘rapists’ and criminals.

The Mexican government said it would not allow the ‘illegal entry’ of any migrant caravans and has deployed 500 immigration officers to the border states of Chiapas and Tabasco.