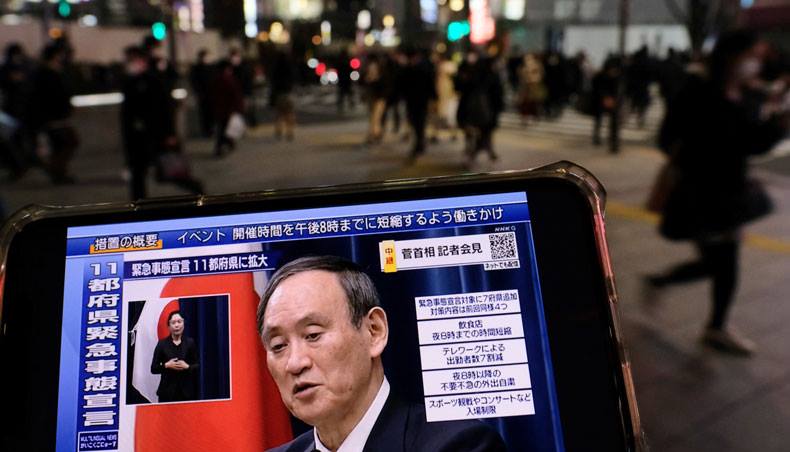 Japanese prime minister Yoshihide Suga is seen on a mobile phone screen during his live press conference at Tokyo’s Shinjuku district on January 13, 2021 under a state of emergency over the COVID-19 pandemic. — AFP photo

Major firms including Sony, Panasonic and Nissan on Monday urged the Japanese government to make its 2030 renewable energy target twice as ambitious.

Japan currently aims to source between 22 and 24 per cent of its power from solar, wind and other renewables by 2030, a target set three years ago and soon to be reassessed as the government revises its energy strategy.

A group of 92 corporations known as the Japan Climate Initiative on Monday urged ministers to double this goal to 40-50 per cent.

Many of Japan’s biggest firms, from Fujifilm to Toshiba, as well as household names in insurance, electricity and food and drink, signed the petition.

‘In order for Japan to meet its responsibilities to be one of the leaders in global efforts, the target needs to be much more ambitious,’ they said in a statement.

‘An ambitious target will stimulate renewable energy deployment, and Japanese companies will be able to play a greater role in the global business environment, where decarbonisation is accelerating,’ it added.

Japan’s renewable energy use was around 17 per cent in 2017.

And by some estimates it may have already hit its 2030 target last year, due to a combination of growth in the green energy sector and a pandemic-related fall in demand.

The country ploughed $16.5 billion into renewable energy in 2019, according to a UN report – making it the world’s fourth biggest investor in the sector, but still far behind China, the United States and Europe.

However, Japan is still heavily reliant on fossil fuels, especially after public anger over the 2011 Fukushima meltdown pushed all its nuclear reactors temporarily offline.

It has struggled to cut carbon emissions since the disaster, with a third of total electricity generation provided by coal, and nearly 40 per cent by LNG-fired plants.