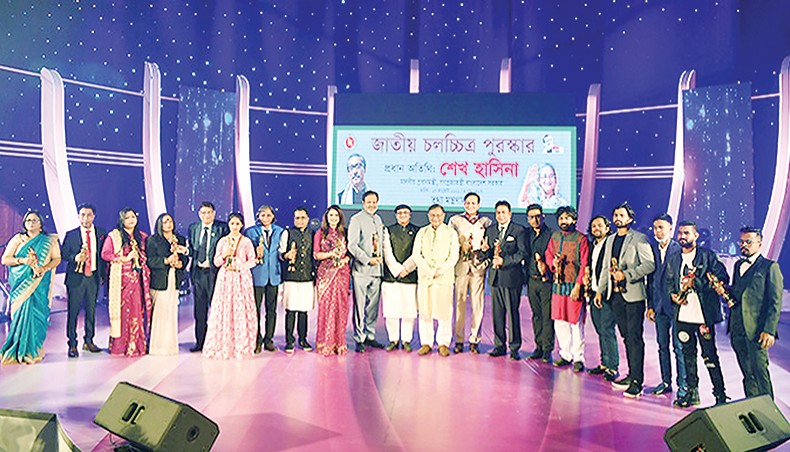 Information minister Hasan Mahmud together with the winners of National Film Award 2019 poses for a photo during the award ceremony at Bangabandhu International Conference Centre in Dhaka on Sunday. — BSS photo

Stating that her government would do everything necessary for survival of the country’s cinema industry, prime minister Sheikh Hasina on Sunday urged all concerned to make more films on the liberation war as the generation after generation could know the real history of Bangladesh’s emergence as an independent nation.

‘I request you all concerned to make more films on the liberation war as the generation after generation can know the real history of our victory as the history was distorted with the assassination of the Father of the Nation on August 15, 1975,’ she said.

The prime minister said this while addressing the handing-over ceremony virtually of the National Film Award-2019, the highest recognition to the contribution of artistes in Bangladeshi films from her official residence Ganabhaban in Dhaka.

The Ministry of Information organised the function at the Bangabandhu International Conference Centre.

Noting that the cinema is the only means of entertainment for the commoners, Sheikh Hasina said that her government had been working to reach the cinema culture to the upazila level and for which a fund of Tk 1000 crore was going to be raised from where people could take loan at low interest rate to build cinema halls or cineplexes for amusement of the people of the localities.

She urged all concerned to make such films as people could go to the cinema halls with their family members to get refreshed.

‘Make more films having education elements for the children as they can prepare themselves by seeing the movies,’ she added.

The prime minister also said that they were specially attaching priority on making cinemas using the modern technology as those could go outside the country to compete the foreign films.

Information minister Hasan Mahmud, MP, and its secretary Khaja Miah spoke at the function while state minister for information Md Murad Hassan, MP, was present on the dais.

On behalf of the prime minister, the information minister handed over the certificate, replica and honorary cheque to the recipients of the film award in 26 categories.

Sheikh Hasina urged the people involved in film making to play a more responsible role in making cinemas as movies could contribute significantly to the development of the country and change people’s lot.

‘It is possible to convey many things through a cinema, a drama, a story or a poetry which has great appeals to reach the hearts of the people rather that whatever I could say as a politician,’ she added.

The prime minister said that they have a space in hearts for the people of the cultural and literary arenas as her younger brother Sheikh Kamal was involved with drama while each of her family members got involved in the cultural and sports fraternities.

Briefly highlighting the measures taken by her government for the development of the film industry, she said that her government was going to develop the Bangladesh Film Development Corporation at Kawranbazar in Dhaka and Bangabandhu Sheikh Mujib Film City at Kabirpur with all the modern facilities so that the artistes could blossom their talents.

Besides, the works on constructing the BFDC Complex at a cost of Tk 323 crore is going on while the government has built Bangladesh Film Archive Bhaban under a project involving Tk 87 crore to preserve the old films in a proper manner, she continued.

The prime minister said that her government had formulated the Film Societies (Registration) Act, 2011, the National Film Policy, 2017 and the Joint Venture Film Policy-2017 while censor related laws, rules and policies were formulated in view of further development of the country’s film industry.

She said that the cabinet division had already approved a bill on the Bangladesh Film Artistes’ Welfare Trust Act, 2020 and it would be passed in parliament.

After the passage of the act, the government will give a seed money for the trust, she said and hoped the film related people will also contribute to the fund as the people involved in films as they can avail of money in their need for treatment and other purposes, she continued.

The prime minister greeted the award recipients and thanked all involved in the cultural sector as they have played a significant role to make the people aware about the adverse impact of the coronavirus and urged all to follow the health guidelines properly to stop further spread of the disease.

After the independence of Bangladesh it was renamed as Bangladesh Film Development Corporation, she said.

The prime minister said that acclaimed Indian director Shyam Benegal was entrusted with making a Bangladesh-India co-production of a feature film on the life and works of Sheikh Mujibur Rahman, adding that the shooting was supposed to start in Bangladesh with local artistes, but it had not been possible due to the coronavirus. The shooting of the film is expected to start in Mumbai, she informed.

Earlier on December 3 last, the names of the recipients of National Film Awards 2019 were announced in 26 categories.

‘No dorai’ and ‘Fagun Haway’ movies jointly won the award in the best film category.

Taneem Rahman Angshu was adjudged the best director for his film ‘No dorai’.

Zahid Hasan was awarded in the best villain category for the film ‘Shap Ludu’.