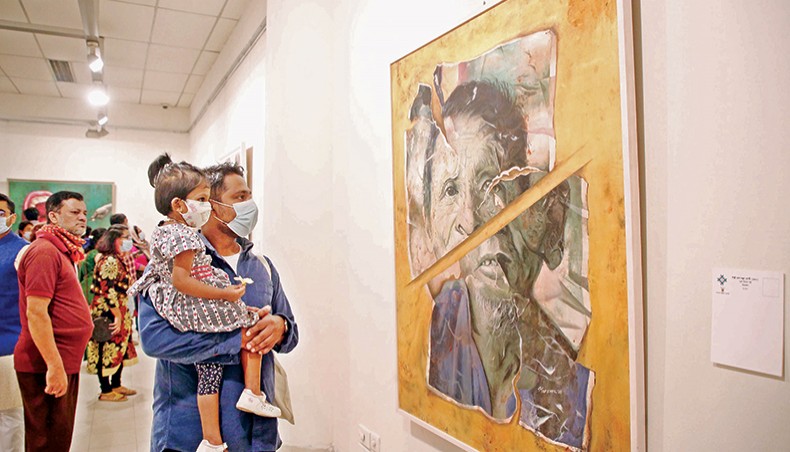 Visitors look at an artwork at the 22nd edition of Young Artists’ Art Exhibition at Bangladesh Shilpakala Academy. — Sony Ramany

The 22nd edition of the Young Artists’ Art Exhibition, held from November 30 to January 16 at the National Art Gallery, deserves special mention for bringing back viewers to the gallery at a time when most of the art institutions across the globe suspended operations for the COVID-19 outbreak.

The exhibition attracted over 1,000 visitors daily amid the health emergency. Most of these visitors were students, who came from different corners of the city and spent hours at the gallery to look at 368 artworks by 337 young artists, many of whom are students of public and private institutions.

The show gave a glimpse into the experimentations of the contemporary young artists. The works on display bore signs of experiment with mediums and techniques of crossing the boundaries of mediums while they explored a verity of contemporary issues, including the impact of the COVID-19 outbreak.

For the first time in the history of such a national-level exhibition, the entire Young Artists’ Art Exhibition was made available virtually at Bangladesh Shilpakala Academy’s website shilpakala.gov.bd.

Some visitors said that this played an important role in attracting young viewers at the show.

The academy has been holding the exhibition in alternate years since 1975. Since the beginning of the show, it played an important role in promoting young talents aged between 21 and 35 years.

Some of the early participants and award winners, including Shahid Kabir, who bagged the best award in the very first edition, later became artists of much renown.

What makes the latest edition of the exhibition different from the previous ones is the change is the introduction of new segments. There are 12 curated shows representing the art faculties of private and public universities where the artists where the curators were give a free hand.

The credit goes to the incumbent director general of the academy Liaquat Ali Lucky for taking a courageous decision of holding the show amid the COVID-19 outbreak in the first place. Going beyond the bureaucratic rigidity, Liaquat Ali Lucky decided to hold the national-level art shows and involved artists, art teachers and critics, who, for years, had been demanding a major changes in holding national and international-level art exhibitions in the country.

Important inclusion to the 22nd edition of the Young Artists’ Art Exhibition was curated art-shows of the 12 art departments alongside the regular segments where all works went through a screening and were for competition.

‘It was a challenging task for us to hold the young artists’ art exhibition amid the COVID-19 outbreak after suspension of physical shows for months. But, we got tremendous response from young artists and institutions although academic activities remained closed since March,’ Liaquat Ali said.

He said that 519 artists aged between 21 and 35 submitted 1,350 artworks from across the country in 11 categories, of which six were of conventional academic categories — painting, sculpture, craft, graphic design, oriental art, ceramic — while others such as new media, photography, installation and performance art were created to accommodate the contemporary practices.

A total of 12 prizes were awarded to the participating artists — one Young  Artists’ Art Exhibition 2020 award and 11 best awards in 11 different categories.

Soma Surovi Jannat bagged 22nd Young Artists’ Art Exhibition 2020 Award for her Installation titled ‘Adikatha’. It is the top award of the competition for which she received a cheque of Tk 1 lakh, medal and a certificate.

Soma Surovi Jannat’s ‘Adikatha’, which won the best award in all mediums, is composed of paper cut-outs painted with chalk, yellow soil and tea, on which small motifs are drawn with a pen. It features letters in their prehistoric forms as the artist’s intention was to explore the origin of written words.

Several viewers said that they were excited while watching so many quality artworks by young artists of the country under one roof. Many of them were found taking selfies in front of the displayed artworks.

‘I came to know about the exhibition on the social media and decided to come here amid the COVID-19 outbreak as my Facebook friends did,’ said Rayhanul Abedin.

Dhaka University fine arts faculty dean Nisar Hossain praised Bangladesh Shilpakala Academy for being able to hold such as successful show involving so many artists amid the pandemic and for including curatorial shows as per their demands.

‘The number of the participating artists should also be reduced to make it more competitive,’ he added.

The 22nd edition of the Young Artists’ Art Exhibition wrapped up on Saturday with a closing ceremony at the National Art Gallery’s auditorium.