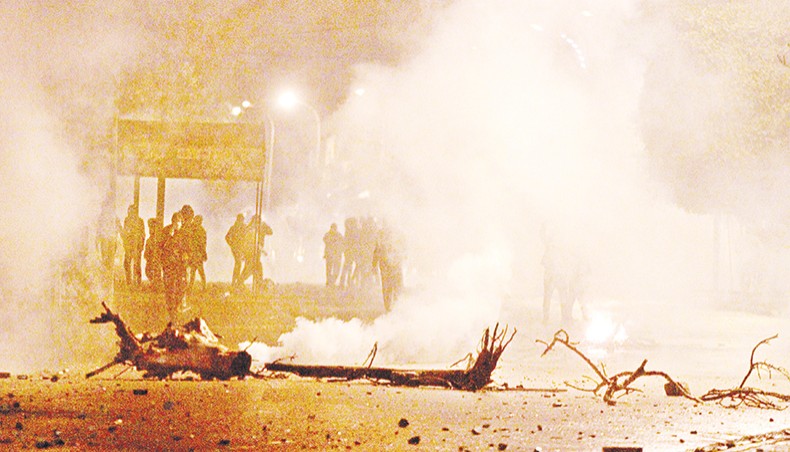 Demonstrators clash with security forces during a protest in the Tunisian city of Siliana, the capital of the governorate of the same name, about 130 kms southwest of the capital Tunis, on Sunday. — AFP photo

Tunisian security forces arrested dozens of young people during consecutive nights of disturbances in the capital and other cities, a government spokesman said Sunday.

The disturbances come amid a nationwide lockdown imposed since Thursday — the 10 year anniversary of dictator Zine El Abidine Ben Ali’s fall from power — as part of efforts to rein in surging coronavirus infections.

Interior ministry spokesman Khaled Hayouni said that dozens of young people, mostly aged between 14 and 17, were arrested after they took to the streets to loot and vandalise shopfronts and cars.

He also said those arrested stood accused of throwing stones at police in several locations across the country in two nights of violence that peaked on Saturday night.

Even before the recent lockdown, a four-day measure meant to expire on Sunday, Tunisia had since October been under a night-time curfew.

Sousse — a magnet for foreign holidaymakers in normal times, but hit hard by the on-going pandemic — and other cities were also hit by the disturbances.

A decade on from the revolution, many Tunisians are increasingly angered by poor public services and a political class that has repeatedly proved unable to govern coherently.

GDP shrank by nine percent last year, consumer prices have spiralled and one third of young people are unemployed.

The key tourism sector, already on its knees after a string of deadly jihadist attacks in 2015, has been dealt a devastating blow by the pandemic.

Tunisia has registered over 1,77,000 coronavirus cases, including over 5,600 deaths from the disease.