A Yemeni famine made in Washington and Riyadh 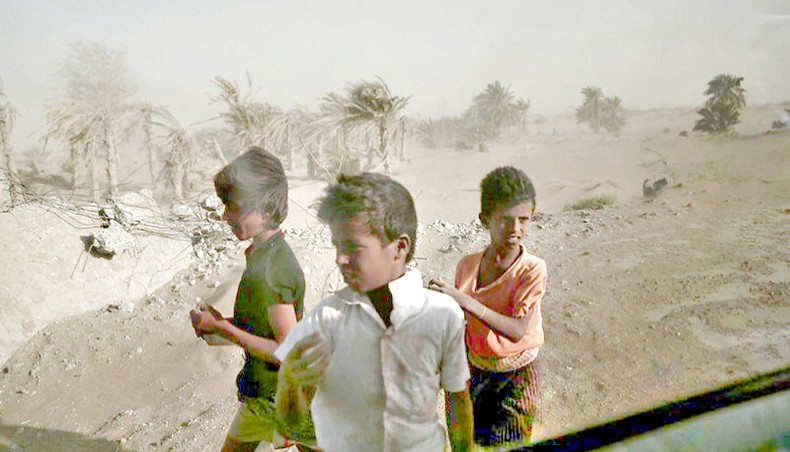 Branding the Houthis as terrorists will make it vastly more difficult for humanitarian groups to deliver desperately needed food, fuel, and medicine to 24 million Yemenis, 80 per cent of the country’s population. Most of the Yemenis who need aid, including 12 million children, live in Houthi-controlled areas. Aid agencies, which are forced to coordinate their activity with the Houthis, must now fear being subject to legal sanctions.

The UN has called Yemen the ‘world’s worst humanitarian crisis,’ and rightly so. A cholera epidemic and the coronavirus have added to the suffering caused by the war. Even before the Houthi insurgency against the government of president Abdrabbuh Mansur Hadi, which began in 2014, Yemen was the Arab world’s poorest country. Six years of war have intensified Yemen’s suffering. Ten million Yemenis are ‘at risk’ of famine, according to Human Rights Watch. UN secretary general António Guterres declares that ‘Yemen is now in imminent danger of the worst famine the world has seen in decades.’ This could happen within ‘a few short months,’ David Beasley, UN World Food Programme Executive Director, said in November.

There is a reason for that. The UN has not yet declared that a famine exists in Yemen. So, conditions in Yemen, while nightmarish, may not yet meet the definition of ‘famine’ under the Integrated Food Security Phase Classification, the food insecurity scale used by the UN.

However, I think professor Shireen Al-Adeimi of Michigan State University has a better explanation. Professor Al-Adeimi has tweeted: ‘Famine hasn’t been declared because the UN faces immense pressure from its top donors, the US and Saudi [Arabia], who are also causing the famine in Yemen.’

We should have known. Labelling Yemen’s suffering as a ‘famine’ is politically inconvenient. You may be reminded of the Clinton administration’s cowardice in refusing to call the 1994 slaughter in Rwanda ‘genocide’ because that might have forced the US to step in to stop the killing.

The famine in Yemen isn’t an accident. The famine is intentional. Kamel Jendoubi, the chairperson of the UN Group of Experts on Yemen, reported to the Security Council in December that ‘Civilians in Yemen are not starving; they’re being starved by the parties to the conflict.’

Some of the blame goes to the Houthis who divert and delay aid deliveries, and extort bribes before allowing aid to go through. Yet most of the blame for Yemen’s famine belongs to the Saudi-led coalition. The famine exists due to the coalition’s bombing campaign and the coalition’s land, sea, and air blockade on Yemen. The bombing campaign and blockade have continued, with brief interruptions, since 2015.

Yemen imports 80 per cent of its food. The Saudis intercept and impound some aid ships for periods up to 100 days. Other ships are never allowed to dock in Yemen. The coalition says the blockade is necessary in order to keep Iranian arms shipments from the Houthis. The delays the naval blockade creates cause food and medicine prices to soar, making them unaffordable to most Yemenis.

Saudi and UAE airstrikes have killed or wounded some 20,000 Yemeni civilians. In addition, the coalition deliberately targets water treatment plants and facilities involved in food production. Half of Yemen’s hospitals and medical clinics have been destroyed or forced to close since the coalition bombing began. The coalition also bombs cranes used in Yemeni ports, making it impossible to unload food and medicine.

US role in creating starvation in Yemen

THE US aids and abets the coalition’s intentional starvation of Yemen. The US shares intelligence with the coalition, provides targeting assistance, and provides spare parts for coalition warplanes. President Barack Obama took the US into the war in 2015 in order to placate the Gulf States which opposed his nuclear deal with Iran. President Donald Trump, who hates everything else President Obama ever did, has enthusiastically continued Obama’s Yemen policy despite Congressional resistance.

At a press conference on March 15, 2019, secretary of state Mike Pompeo shed crocodile tears for Yemen’s plight. Pompeo said that anyone who ‘truly care[s] about Yemeni lives’ will support a Saudi victory in the war. Two days earlier, the Senate had approved a War Powers Resolution which would have ended US assistance to the Saudi-led coalition. Pompeo added that ‘The way to alleviate the Yemeni people’s suffering isn’t to prolong the conflict by handicapping our partners in the fight, but by giving the Saudi-led coalition the support needed to defeat Iranian-backed rebels and ensure a just peace.’

Horseshit. Pompeo doesn’t care about Yemenis. Pompeo sees the war in Yemen entirely through the prism of his obsession with Iran. Iran supports the Houthis (although nowhere near the extent to which the US supports Saudi Arabia and the UAE), so Pompeo supports the Saudi-led coalition no matter how many innocents it kills.

Just how little Yemeni lives matter to Trump and Pompeo is apparent in the administration’s slashing of tens of millions of dollars in aid for Yemen in March 2020. The justification the Administration gave was Houthi diversion of aid. No matter that humanitarian groups objected that this was far too drastic a response to Houthi moves.

Even before the cuts, US aid to Yemen fell far short of the gargantuan sums reaped by US defence contractors in weapons sales to the coalition, such as the Trump Administration’s upcoming $23 billion arms sale to the UAE.

Trump loves arms sales and they have been his administration’s chief motivation for supporting the Saudis. Two years ago, secretary of state Mike Pompeo falsely certified that Saudi Arabia and the UAE were ‘undertaking demonstrable actions to reduce the risk of harm to civilians and civilian infrastructure’ in Yemen. The state department’s Bureau of Legislative Affairs, then headed by Charles Faulkner, a former Raytheon lobbyist, had warned Pompeo that failure to certify could jeopardise US arms sales. The truth is that there is no evidence that the coalition is at all concerned about civilian deaths.

CounterPunch.org, January 15. Charles Pierson is a lawyer and a member of the Pittsburgh Anti-Drone Warfare Coalition.