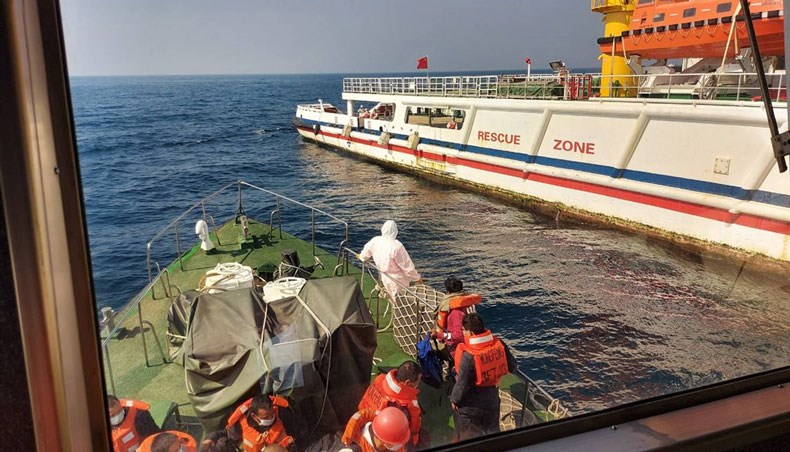 A Taiwanese fishing trawler has rescued 22 crewmen including eight Bangladeshi from a Panamanian freighter that had caught fire in the Philippine Sea.- photo courtesy Focus Taiwan

A Taiwanese fishing trawler has rescued 22 crewmen including eight Bangladeshi from a Panamanian freighter that had caught fire in the Philippine Sea, the Coast Guard Administration of the coutnry said on Saturday, reports Focus Taiwan.

The Panama-registered Yong Feng issued a distress call on Wednesday after its engine room caught fire some 485 nautical miles southeast of Eluanbi, Taiwan’s southernmost tip, the CGA said in a statement.

The location was east of the Philippines and normally covered by the Philippines’ emergency services, but the authorities there called on Taiwan for assistance, the coast guard said.

The Taiwanese fishing trawler Min Fa Yu was just a two-hour journey away from the Yong Feng, and it was asked by Taiwan’s National Rescue Command Centre to head toward the distressed vessel and rescue its 22 crew members — 14 Chinese and eight Bangladeshi nationals — the CGA said.

Given that the Yong Feng was Chinese-owned, the coast guard said that Taiwan began the following day to coordinate with authorities in China to have the crew transferred to a Chinese vessel.

The rescued crewmen on the Min Fa Yu, which had been under the escort of a Taiwanese Coast Guard vessel, successfully met up with the Xiamen-based Chinese No 113 Donghai rescue ship in waters southwest of Taiwan on Saturday morning, the CGA said.

The Taiwanese trawler was subsequently escorted back to Taiwan, where its crew members were now being subjected to mandatory quarantine in view of the COVID-19 pandemic.

According to the online Shipfix Directory, the Yong Feng is a 13,880-ton bulk carrier.