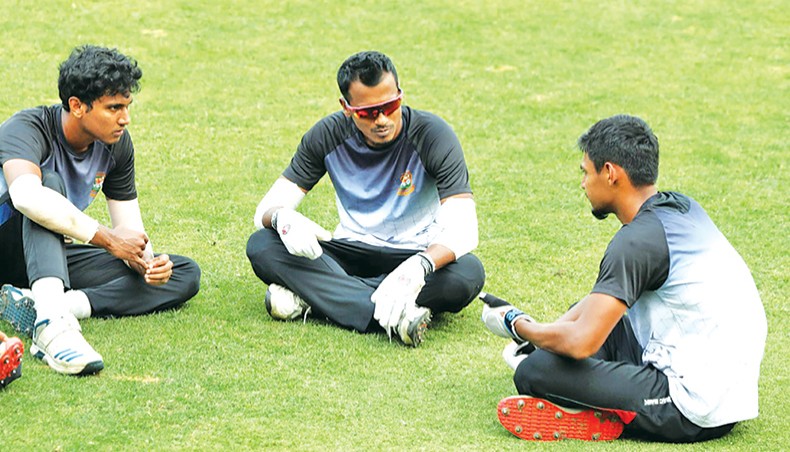 Alongside ODI team regulars Mustafizur Rahman, Mohammad Saifuddin and the experienced Rubel Hossain; Hasan Mahmud and Shoriful Islam earned their maiden call-up to the ODI side while Taskin Ahmed returned to the Tigers’ 50-over team after 2017.

Hasan, who impressed with his speed and accurate death over bowling in last year’s Bangabandhu Twenty20 Cup, took four wickets in the first intra-squad practise game on Thursday and was rewarded with a call-up.

Shoriful also took two wickets in that practice game and has become the first player from the Under-19 World Cup winning side to make it to the final squad of the national team.

Taskin’s last ODI was against South Africa in East London and the pacer has returned to the squad after consistent performances in the domestic circuit.

Under-19 World Cup winner Parvez Hossain was earlier withdrawn from the provisional squad for groin injury.

Chief selector Minhazul Abedin believes that the squad is well balanced and is flexible enough to adapt to any situation.

‘We have considered all sorts of combinations; pace, spin whichever one is required in a match we have it. The team combination is good. The side is well balanced in terms of batting and bowling. I believe this team will present us a very good series,’ Minhajul told the reporters.

Minhazul also informed that they announced a slightly bigger squad for the series to have replacements in hand in case a player falls sick to the COVID-19 virus.

‘We made the final squad with 18 members due to COVID-19 situation because if we need to pick someone from outside the bio-secure bubble, he must go through a quarantine period of minimum five days.

‘If multiple players catch coronavirus at the same time, we will be in trouble to find their replacements. Therefore we made the squad size bigger. That will not affect us much,’ Minhazul added.

Shakib Al Hasan also returned to the national side after serving his one-year sanction and the chief selector was excited to have the former world ‘number one all-rounder’ back in the team.

‘The number one all-rounder joins the team again. He can share his experience with the others in the team. His inclusion is a boost for the team. We all think that he is making a fresh start and we are expecting the best out of him,’ said the former Bangladesh captain.

Shakib was searching for his form since returning to competitive cricket as he had a barren run with the bat in the Bangabandhu Twenty20 Cup but on Saturday he showed signs of his old self with a 52-run knock off 82 balls in the second and final intra-squad practise game at the BKSP.