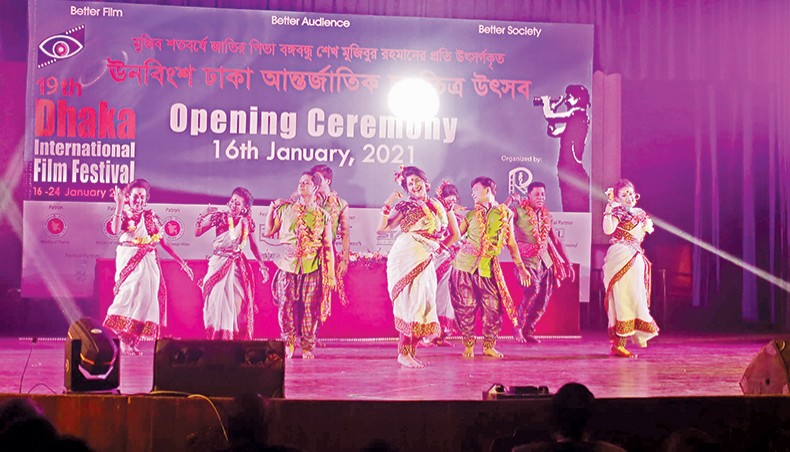 The inaugural ceremony of the event was held at the Main Auditorium of the Bangladesh National Museum.

The guests and audience observed one minute silence in memory of the filmmakers and intellectuals who died of COVID-19.

‘Dhaka International Film Festival is a flagship event in the domain of films. I am happy to see that the festival is becoming a high platform gradually. This is a great event for gathering and presenting creative minds in the time of the COVID-19 pandemic. Through this event people will know and learn about culture, society, tradition and beliefs of other countries,’ said Abdul Momen.

‘My heartiest congratulations to the organisers for hosting the film festival in Dhaka.  The festival will give a boost to our film industry. I wish the festival all the success,’ Abdul Momen added.

‘I thank all for attending the inaugural ceremony of the festival. We have been organising the festival for the last 28 years. As we do not have any permanent festival venue, we have to screen films in different venues in the capital including Bangladesh Shilpakala Academy, Bangladesh National Museum, Sufia Kamal National Public Library and others. The new segments of the festival Legendary Leaders Who Changed The World and Tribute will take the event to new heights,’ said Ahmed Muztaba Zamal.

‘We will also screen films in an open space at the Nadan Mancha of Bangladesh Shilpakala Academy for the first time. I hope people will enjoy it,’ Ahmed Muztaba Zamal added.

‘We were confused about whether we would be able to organise the festival amid the COVID-19 crisis. I am happy because the festival is taking place and all the credit goes to Ahmed Muztaba Zamal. Eight Bangladeshi full length feature films will be screened at the festival. All the film festivals across the globe are being held online but we have organised the festival at venues. We will also screen some films online,’ said M Hamid.

The event is also featuring ancillary events such as the Seventh Dhaka International Conference on Women in Cinema 2021 on January 17 and January 18, West Meets East on January 19 and others.