Museveni clings on as one of Africa’s longest-serving leaders 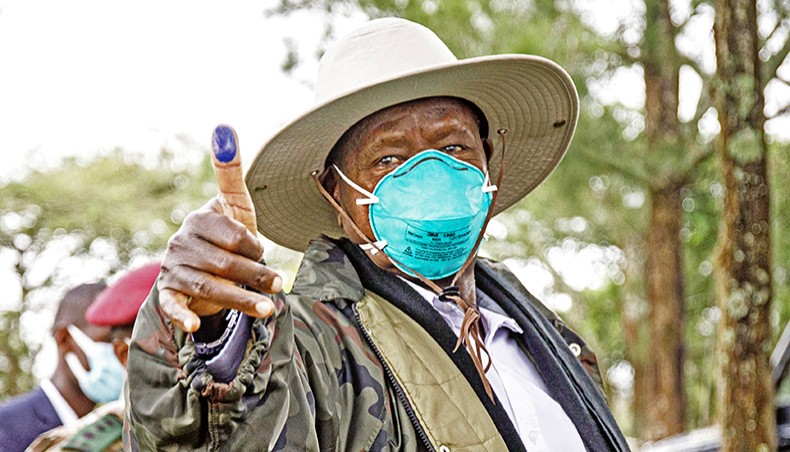 Yoweri Museveni has been president longer than most Ugandans have been alive, and his disputed election win Saturday cements his place among the world’s longest serving and authoritarian leaders.

Shortly after Museveni took power in 1986, ending years of bloodshed and chaos under murderous tyrants, the young president mused that leaders overstaying their welcome lay at the heart of Africa’s problems.

But nearly four decades later the introspection is gone and Museveni — once hailed in the West as a model African leader committed to good governance — has joined the ranks of those he once criticised, winning a sixth term in office.

His genial face and penchant for folksy parables belie a past as a wily guerrilla fighter and ruthless political survivor.

In his 35-year reign Museveni has fused state and party so effectively, and crushed political opposition so totally, that any serious challenge to him or his National Resistance Movement was made impossible.

This election was no different. It saw one of the most violent campaigns in recent memory, and Museveni’s beleaguered rival Bobi Wine dismissed the process as a rigged ‘sham’.

Museveni will thus continue his rule over a population where three-quarters are under 30 and have never known anyone else in charge.

At 76 — though some opponents say he is older — Museveni says he is fighting fit, occasionally performing push ups before crowds and jogging in his office.

In 2020, he joined Instagram and added a childhood name, Tibuhaburwa, to his official title.

Unbound by Uganda’s constitution — it was amended twice to remove presidential term and age limits — many believe Museveni, who never speaks publicly of succession and has broken past promises to stand down, plans to rule for the rest of his days.

‘He will not leave until he has completed his mission of liberating Uganda and Africa... It’s an illusionary and delusional mindset, of course. But he looks at himself as some sort of messiah,’ said Moses Khisa, assistant professor of political science at North Carolina State University.

In long, meandering speeches often laced with peasant folklore — he was raised by cattle herders in western Uganda — Museveni appealed for more time during the campaign, likening himself to a farmer leaving a plantation just as it starts bearing fruit.

Rarely too does ‘the old man who saved the country’ miss a chance to hark back to his heroics in the bush wars — sometimes exchanging his trademark safari hat and yellow shirt for camouflage fatigues to drive home the point.

It is a favourite reference for the proud military man — but one of dwindling currency, given most Ugandans are not old enough to remember the relative peace and stability that followed the horrors of Idi Amin and Milton Obote.

British journalist William Pike, who interviewed Museveni in 1984, described a man then well-admired with a ‘faraway look in his eyes as he spoke, the look of a dreamer, a revolutionary’.

Museveni studied in Dar es Salaam, Tanzania, in the 1960s when the university acted as a kind of revolutionary finishing school for anti-colonialists.

‘He was intensely serious but showed flashes of humour. He encouraged debate although his officers were deferential,’ wrote Pike in his 2019 book ‘Combatants: A memoir of the Bush War and the press in Uganda.’

This extended to the international community, which saw promise in Museveni’s early strides on economic growth, poverty alleviation and combating HIV/AIDS.

A cunning strategist, Museveni also positioned himself as something of an elder statesman and peacemaker in a volatile region—even as his forces were marauding in eastern Congo and backing rebels in other war-torn corners.

His deployment of troops to fight jihadists in Somalia, and open door policy to refugees, won favour from foreign donors who critics say turned a blind eye to his abuses at home and warmongering abroad.

‘Museveni has always been brutal, but he’s always had to play this game with the West, so that he continues to get support,’ Helen Epstein, author of ‘Another Fine Mess: America, Uganda, and the War on Terror’, told AFP.

But as the years ticked by the contemplative young rebel leader gave way to an ever-more erratic and uncompromising head of state.

‘There were times when Museveni was a persuasive person. He would win over you ideologically, and through discourse. He no longer does a whole lot of that. He increasingly has to rely on money and force,’ Khisa said.

Museveni once promised to retire to his cherished herd of long-horned Ankole cattle, but instead has outlasted every ruler on the continent bar Teodoro Obiang Nguema of Equatorial Guinea and Paul Biya of Cameroon.