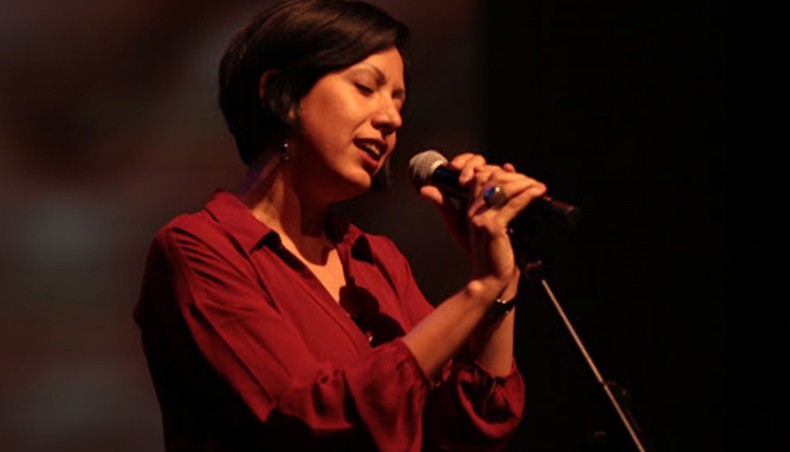 The poetry of Rafeef Ziadah, who chooses to be identified as a Palestinian refugee, is powerful because of its universality of feelings. The feelings that spur from the process of dehumanising the oppressed, as the oppressed always refuse to be dehumanised and declare they are alive with their life, writes Md Mashiur Rahaman

SPOKEN word artist Rafeef Ziadah rightly describes herself as a Palestinian refugee, though she never lived in Palestine. Her parents had to leave Palestine before she was born. She says that other people are most likely to miss a place where they stayed once and therefore, they feel that they belonged there, but for most of the Palestinian refugees, they miss a place where they belong but probably never lived there.

Now Rafeef Ziadah is a Canadian citizen and lives and works in London. Other than being a poet she is an activist and an academic. She teaches comparative politics of the Middle East at the School of Oriental and African Studies, University of London. But to her, above all, she is a Palestinian.

As a genre, from its beginning, poems were oral tradition and were written to be recited in front of an audience. In the modern era, the idea of poetry has changed and poems started to being published only for reading.

The rise of the genre spoken word poetry can be considered as the resurrection of poetry with all its power and strength for influencing the collective psyche. As the spoken words are meant to be performed, these kinds of poems don’t rely upon the fact how beautiful they look on a printed page. They have to be phonetically aesthetic. The genre is popularly used in the discourses of protest in recent times throughout the world.

In the late twentieth and early twenty-first century, many of the spoken word poets have gained immense popularity among the masses. Some of them went viral on social media in recent times. Sarah Kay and Phil Kaye’s ‘When Love Arrives’, and Aamir Aziz’s ‘Sab Yaad Rakha Jayega’ (everything will be remembered) are two worth mentioning.

Some of Rafeef Ziadah’s spoken word poems went viral. One of them is ‘We teach life’, after which Ziadah’s second album of spoken word poetry is named. The album was released on November 23, 2015. It has received immense public and as well as critical acclamation all over the world.

The words that comprise the poem are simple. It is structured like a monologue that is delivered by a Palestinian journalist. When Ziadah performs this poem, she shares an anecdote of an event that occurred when she was working as a media spokesperson reporting the Israeli bombing in Gaza. At that time one of her colleagues asked her, ‘Don’t you think it’d all be fine if you stop teaching your children to hate?’ Rafeef Ziadah didn’t tell that colleague anything in response immediately. Rather she wrote this poem ‘as a response to these types of questions Palestinians always get’.

The poem starts with imagery where the speaker’s body was a televised massacre, which the speaker terms as ‘TVd massacre’. But the body cannot express its agony freely. The expression had to fit into ‘sound bites’ and ‘word limits’, and the expression must include adequate statistical data that would prove the legitimacy of the ‘counter-measures’ taken by Israel. When the speaker’s body is experiencing this, an unnamed ‘he’ asked, ‘Ms Ziadah, don’t you think that everything would be resolved if you would just stop teaching so much hatred to your children?’

After this question the speaker first reminds herself to pause, then to be patient, then to smile, and then she delivers an epiphanic statement ‘We teach life, sir!’ The speaker repeats this statement throughout the poem for six times and closes the poem with, ‘We Palestinians wake up every morning to teach the rest of the world life, sir’.

In the middle of the statements, the speaker gives accounts of the struggles and the miseries the Palestinians go through every day. The speaker criticizes the media’s approach towards Palestine as the media regards the trivial matters like the need of healthcare and the loss of cattle concerning the massacres caused by Israeli bombing more important. The words of the poem are filled with such original feelings that make the poem explode like a bomb when Ziadah performs it. But a bomb that does not kill, rather fills people with an overwhelming sense of life.

Rafeef Ziadah has published three albums of spoken words till date. The names of her albums are Hadeel (cooing of doves), We Teach Life and Three Generations. All the poems collected in these three albums are either about Palestine or any contemporary aspect of colonialism. In We Teach Life there are thirteen poems. All of them are worth mentioning, but among them ‘Shades of Anger’ and ‘Passport’ require special attention.

Ziadah wrote ‘Shades of Anger’ right after once she had participated in a protest against Israeli occupation and someone told her that she should be raped before she gives births to terrorist children. In the poem, Ziadah ruthlessly criticises the orientalist fantasy of the eastern lands and the women. She resists against all the cultural weapons the neocolonialists use.

In ‘Passport’, Ziadah expresses her feelings during taking the oath before the queen of England and her heirs for becoming a Canadian citizen. In the poem, she criticises the political machinery that prevents the citizens to ask questions to the power and revolt against any injustice.

The people of Palestine have been struggling for a sovereign state for so long. Every year they are losing their lands and lives to the occupying Israel and yet they refuse to cease their struggle. Even if they cannot live in Palestine like Rafeef Ziadah, Palestine never ceases to live inside their hearts.

The feelings Ziadah expresses for her motherland is common for millions of people in the contemporary world. These are the feelings that all the oppressed and forcefully exiled people feel. The Rohingya refugees, the refugees from Syria, Iraq, and all over the Middle East feel the same.

The indigenous people living in Bangladesh who are struggling for their political and cultural rights, for recognition from the state. The people of Bangladesh also felt the same when they had to go to India as refugees during the war of independence.

The power of Ziadah’s poetry comes from this universality of feelings. The feelings that spur from the process of dehumanising the oppressed, as the oppressed always refuse to be dehumanised and declare they are alive with their life.