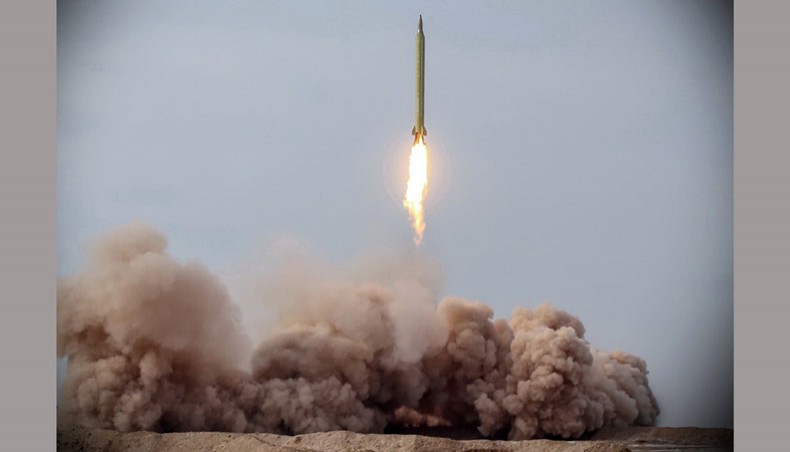 This handout photo provided by Iran's Revolutionary Guard Corps official website via SEPAH News on January 16, 2021, shows the launch of a missile during a military drill in an unknown location in central Iran.  — AFP Photo

Iran’s Revolutionary Guards test-fired ballistic missiles against targets in the Indian Ocean as they wrapped up a two-day exercise, their official website reported Saturday.

The missiles of ‘various classes’ targeted ‘the enemy’s battleships and destroyed them from 1,800 kilometres away,’ according to the Sepahnews website.

The missiles were fired from central Iran at targets located in the northern Indian Ocean, the Guards said.

A video released by state television showed two missiles being launched and targets being hit at sea.

‘One of our major goals in defence policies and strategies is to be able to target enemy ships, including aircraft carriers and battleships, using long-range ballistic missiles,’ Salami said, quoted by Sepahnews.

Bagheri said the launch showed Iran was ready to respond to any ‘ill will’ by its enemies, warning that in such cases ‘they will be targeted and destroyed by our missiles’.

‘We do not intend to carry out any attack,’ he said, adding the exercise showed Iran’s readiness to defend itself ‘with all its  strength’ against any aggressor.

Dubbed Great Prophet 15, the exercise also featured a drone attack on a missile defence system followed by the launch of a barrage of ‘new generation’ surface-to-surface ballistic missiles.

The war games come at a time of rising tensions with the United States in the final days of president Donald Trump’s administration.

It was Iran’s third military exercise in less than two weeks after a naval exercise in the Gulf of Oman on Wednesday and Thursday, and an army drone drill on January 5 and 6.

The exercises started two days after Iran marked the anniversary of the assassination of revered Guards commander Qasem Soleimani, killed in a US drone strike in Iraq in January last year.