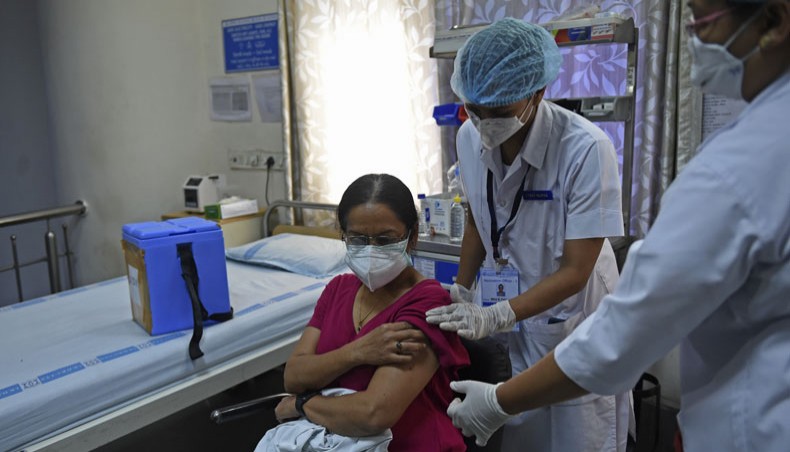 A medical worker inoculates a doctor with a COVID-19 vaccine at the Institute of Kidney Diseases and Research Centre in Ahmedabad on January 16. — AFP Photo

India kicked off one of the world’s largest COVID-19 vaccination drives on Saturday as the pandemic spread at a record pace and global COVID-19 deaths surged past two million.

The World Health Organisation has called for accelerating vaccine rollouts worldwide as well as ramping up efforts to study the sequencing of the virus, which has infected more than 93 million people globally since it was first detected in China in late 2019.

India, home to 1.3 billion people, has the world’s second-largest caseload.

The government has given approvals to two vaccines—though one is yet to complete clinical trials—aiming to inoculate around 300 million people by July.

One of the first to receive a jab in the eastern city of Kolkata was 35-year-old health worker Santa Roy, who told AFP he now saw a ‘ray of hope’ after witnessing people die of the coronavirus.

Authorities say they are drawing on their experience with elections and child immunisation programmes for the drive, which is a daunting task in an enormous, impoverished nation with often shoddy transport infrastructure and one of the world’s worst-funded healthcare systems.

Regular child inoculations are a ‘much smaller game’ and vaccinating against Covid-19 will be ‘deeply challenging’, said Satyajit Rath from India’s National Institute of Immunology.

The government has readied tens of thousands of refrigeration tools and about 150,000 specially trained staff to try and overcome some of those challenges.

The vaccines will also have high security, so that doses do not end up being sold on India’s large black market for medicines.

WHO chief Tedros Adhanom Ghebreyesus on Friday said he wanted ‘to see vaccination under way in every country in the next 100 days so that health workers and those at high risk are protected first’.

His call came as infections snowballed, with 724,000 new cases recorded on average per day globally over the past week, according to AFP’s tally—a record 10 percent increase on a week earlier.

The worrying spikes in deaths and infections come as concerns and criticism grow over vaccine logistics and supply issues in many parts of the world.

US pharmaceutical giant Pfizer said shipments of its vaccines would slow for a period in late January.

In hard-hit Europe, there are concerns that the Pfizer delays could further slow a vaccine rollout that has already faced heavy criticism.

Pfizer, which jointly developed its vaccine with German company BioNTech, said EU countries could expect delayed deliveries in the coming weeks due to work being done at its plant in Belgium.

It promised that there would be ‘a significant increase’ in shipments in March, and the European Commission said all vaccines ordered by the bloc for the first quarter would be delivered on time.

But ministers from Denmark, Estonia, Finland, Latvia, Lithuania and Sweden said in a joint letter that the situation was ‘unacceptable’ and ‘decreases the credibility of the vaccination process’.

As cases mount, nations have doubled down on restrictions.

Portugal entered a fresh lockdown Friday, and new curbs on populations were announced from Italy to Brazil.

Beijing extended its isolation period for overseas arrivals, requiring travellers to spend an extra week at home after the 21 days in hotel quarantine already in place, state media reported on Saturday.

Fears are also growing that a new strain of the virus found in Brazil could be more contagious, just like the variants recently found in Britain and South Africa.

Chinese pharmaceutical giant Sinopharm has claimed that ongoing tests showed its vaccine to be effective against the variant first detected in Britain, according to state media.