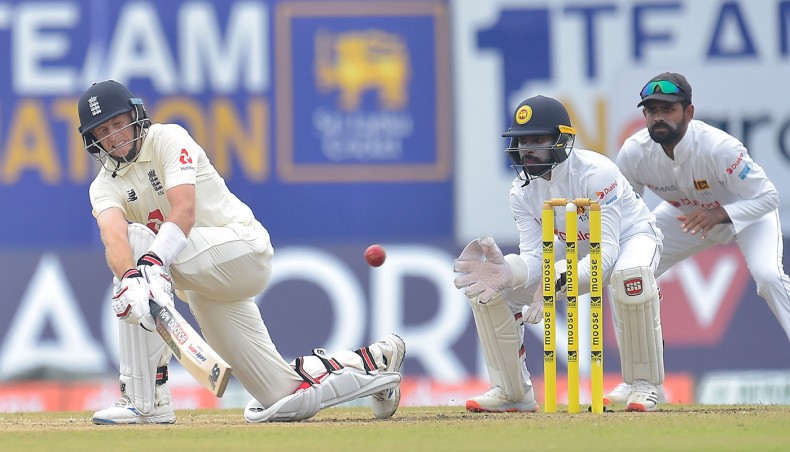 Joe Root completed his fourth double century for England on Saturday but insisted it will mean nothing if his side cannot overcome a defiant Sri Lanka in the first Test.

But Lahiru Thirimanne led Sri Lanka's stubborn resistance, hitting an unbeaten 75 while Kusal Perera made 62 as the home team reached 156-2 in their second innings.

After their disappointing 135 in the first innings, they need another 130 to reach England's total.

Root's 321 ball innings with a six and 18 fours dominated the day. It took less than an hour in the opening session to add the 32 runs to his overnight total.

He reached 200 with a four off Lasith Emuldeniya.

While the empty Covid-19-stricken stadium meant that only his teammates in the pavilion and a lone England fan watching from a nearby fort could applaud, the performance confirmed Root's return as a batsman after a barren 2020 saw him fall to number 11 in the ICC rankings.

He had not reached three figures in a Test since his 226 in New Zealand in November 2019. Root also scored an unbeaten 200 against Sri Lanka at Lord's in 2014.

But he indicated his disappointment after seeing six wickets fall to Sri Lanka's bowlers in the morning session and then the struggle by his own attack.
Running out of partners, Root was the last man out, caught by Emuldeniya on the boundary as he went for a six off Dilruwan Perera.

In the next over Root hit his landmark four then Dom Bess was run out as the tourists suffered a bout of nerves.

Root said he has been looking for more ‘rhythm’ in his batting and ‘to clear my mind’ after the difficult 2020.

‘I've spent lot of time with myself, I had so much time to look back and watch cricket around the world, learning off my peers.’

He watched videos of New Zealand's in-form Kane Williamson and also turned to England's coaches Jacques Kallis, Steve Collingwood and Graham Thorpe for ‘triggers’ for a return to form.

‘I expect a lot from myself, I set high standards and it is nice to have started 2021 well,’ he said.

‘But it won't mean half as much if we don't get a result out of this game. Hopefully we can get a few early wickets and hammer home this advantage’ on Sunday.

The unpredictable weather and durability of Sri Lanka's defences will determine the result.

After their first innings collapse, Sri Lanka looked a different side in the second.

Perera and Thirimanne made 101 for the first wicket.

Perera took a fiery Mark Wood bouncer on his hand and needed a tight bandage to continue. He eventually gave a catch to Jack Leach on the boundary off a wayward Sam Curran delivery.

After four straight Test zeros Kusal Mendis broke the spell and scored 15 patient runs before he gave a catch to wicketkeeper Jos Buttler off Leach's bowling.

Thirimanne gave one fiery chance to Dom Sibley diving in the gulley off Curran. But he remained with Embuldeniya (0) at the end, taking the first of the two Tests into at least a fourth day.