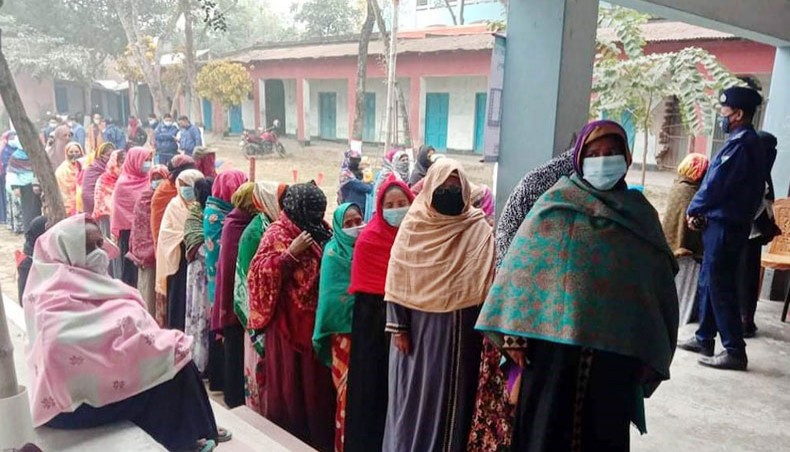 Voters waiting into a queue at the Naldanga Government High School centre in Natore during the second phase of the municipality polls on Saturday. — Focus Bangla Photo

Voting in the second phase elections to 60 municipalities ended amid violence, irregularities and boycott by opposition Bangladesh Nationalist Party candidates in some municipalities on Saturday.

In Bagerhat, BNP backed mayoral candidate of Mongla Port Municipality, Julfikar Ali, and 12 councillor candidates boycotted the election in the morning alleging that their agents were ousted from the polling centres and ruling Awami League activists had taken control over the election centres.

Julfikar and the councillors made the announcement while talking to reporters at Julfikar’s residence on Madrassah Road in the municipality area at about 10:45am.

In Rajshahi, BNP backed mayoral candidate of Bhabaniganj Municipality, Abdur Razzak, boycotted the election at about 11:00am alleging that AL activists ousted his agents from all the polling centres of all the nine wards in the municipality and even he was not allowed to cast his vote.

In Pabna, BNP backed mayoral candidate of Ishwardi Municipality, Rafiqul Islam Nayan, boycotted the election at about 1:15pm with the same allegation.

Electronic voting machines are used in 29 municipalities while traditional ballot papers are used in the remaining areas.

Jatiya Party has backed mayoral candidates in 11 to 12 municipalities.

Alongside Bhangura, Pirojpur and Rupganj, there is no BNP mayoral candidates in two other municipalities — Belkuchi of Sirajganj and Mohonganj of Netrokona.

The polls to only the mayoral posts are being held with the use of election symbols of political parties, while election to the councillor posts and reserved seats in a non-partisan manner.

A total of 216 mayoral candidates are contesting in 60 municipalities, while 724 women contestants are in the race for reserved seats and 2,234 contenders are contesting for councillor posts.

Some 2.2 million people are expected to exercise their franchise.

In Bagerhat, voting in Mongla Port municipality began around 8:00am.

The voters are casing their votes using EVM for the first time.

In Faridpur, voting in Boalmari municipality is underway amid a festive mood.

On December 22, 2020, the Election Commission announced the second phase election schedule for 61 municipalities, but polls to Syedpur municipality in Nilphamari was postponed following the death of a mayoral candidate.

The municipalities also include Kushtia, Beramara, Kumarkhali and Mirpur in Kushtia, Gagni in Meherpur, Shailkupa in Jhenaidah, Mongla port in Bagerhat, Pirojpur, Shariatpur, Magura, Boalmari in Faridpur, Tarabo in Narayanganj, Savar in Dhaka, Dhanbari in Tangail, Fulbaria and Muktagacha in Mymensingh, Mohonaganj and Kendua in Netrakona, Kishoreganj and Kuliarchar in Kishoreganj, Monohardi in Narsingdi.The rest municipalities are Chhatak, Sunamganj and Jagannathpur in Sunamganj, Madhabpur and Nabiganj in Habiganj, Kulaura and Kamalganj in Moulvibazar, Chandina in Cumilla, Basurhar in Noakhali, Sandwip in Chattogram, Khagrachhari, and Lama in Badarban.