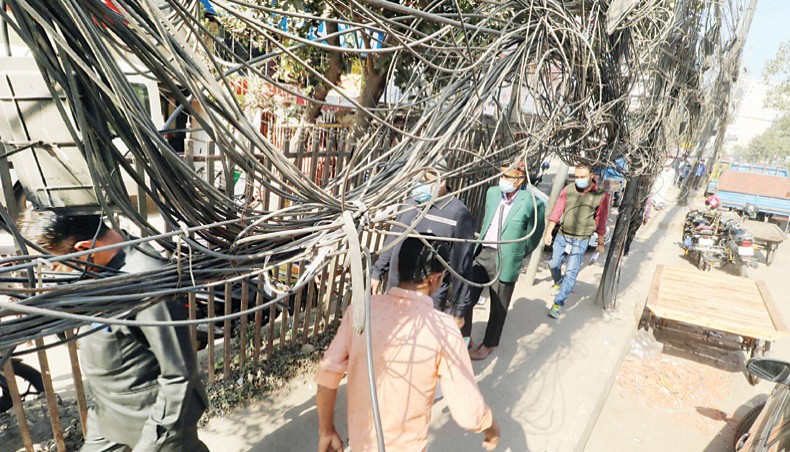 Internet, satellite television, telephone and other cable operators have failed to make visible progress in undergrounding their overhead cables in Dhaka that have gradually made the capital city look cluttered and ugly over the last two decades.

The general secretary of the Internet Service Provider Owners Association of Bangladesh, Emdadul Haque, said that the cable operators were relocating overhead cables but failed to meet the target for lack of experience and relevant machinery.

‘We request the authority to consider a deadline extension till the coming December to complete the undergrounding of cables,’ he told New Age.

He said that they are to meet Dhaka south city mayor Sheikh Fazle Noor Taposh to place their demand on January 21.

Cable operators claimed that they were able to underground cables only in some areas — from Dhanmondi’s Satmosjid Road to BGB Gate, from Pakistan Embassy to Shooting Club, from USA embassy to Kakoli and from Uttara Purban Thana via Airport to Kakoli road.

As the second deadline for undergrounding all overhead cables has expired on December 31, 2020, the DSCC started cutting off the cables on January 3.

DSCC executive magistrate Tanjila Kabir Trapa said that the DSCC stopped its previous drives following requests for more time by the service providers, especially television and internet traders, and in the face of public objection raised against the drive that led to public sufferings due to service disruptions.

On September 1, DSCC magistrates started their drives against overhead cables as the first deadline for relocating cable had expired on August 31, 2020.

On January 3, the DSCC again started the drive and disconnected dish, internet and telephone lines at Bir Uttan CR Datta Road, Motijheel, Gopibagh and Panthapath areas to stop visual pollution in the city.

Over two lakh customers suffered in Dhaka due to the cutting of cables in January when the DSCC removed over two kilometres of cables worth around Tk 50-60 lakh, claimed Dhaka’s cable operators.

Hours after the drive, cable operators replaced the overhead lines to resume services again as they said that the Nationwide Telecommunication Transmission Network operators, who set the cable lines, couldn’t install the lines underground.

The NTTN operators said that it has been installing underground lines in many areas in the city for a number of years but the cable operators were not using them.

While the blame-shifting continues, the city looks ugly due to massive tangles of wires and cables in some areas, especially where the demand for internet connections is extremely high.

SM Anwar Parvez, founding president of the Cable Owners Association of Bangladesh, said that roughly they serve eight lakh holdings in Dhaka but the NTTN operators have less than 20 per cent coverage including areas with partial coverage.

DSCC public relation officer Abu Nasher said that the DSCC allowed cable operators to cut the DSCC roads without any charge, yet they failed to install cables.

‘The DSCC will take further actions as and when the mayor decides,’ he said.