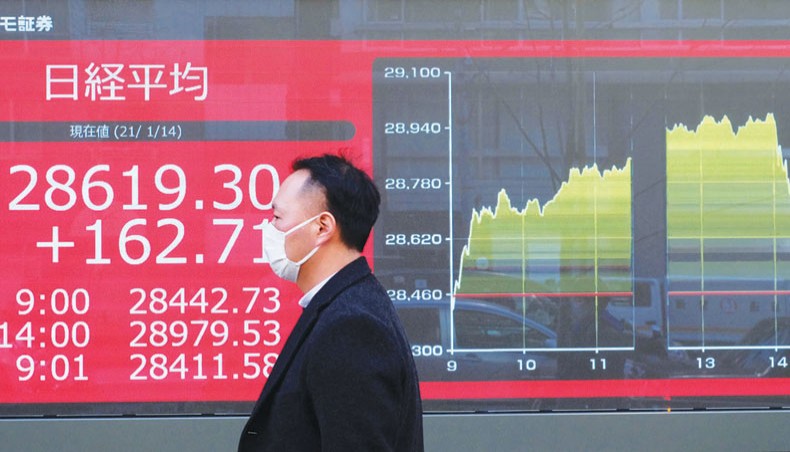 A file photo shows a pedestrian walking past an electronic quotation board displaying share prices on the Tokyo Stock Exchange in Tokyo on January 14. — AFP photo

In late morning deals, London stocks dipped 0.7 per cent, with sentiment dented by news that the UK economy slumped 2.6 per cent in November owing to virus curbs.

Frankfurt declined 0.3 per cent and Paris shed 0.5 per cent in midday eurozone trade.

The dollar traded mixed, while oil prices were down around 1.5 per cent.

Bitcoin stabilised after a record-breaking run that climaxed last week.

‘Most of what Biden announced, with respect to a fresh fiscal aid package for the US economy, was pretty much in line with expectations,’ noted CMC Markets analyst Michael Hewson.

In Europe, more than 30 million coronavirus cases have now been officially recorded, according to an AFP tally based on official health statistics.

Portugal entered a fresh lockdown on Friday while Britain began requiring negative tests for entry, and fresh curbs on populations were announced from Brazil to Lebanon to China.

‘A slump in UK GDP for November highlights the detrimental impact lockdown measures are (having) on economic growth — and the highly infectious forms of the virus now evident in the UK, South Africa, Brazil, and Japan do raise the risk of further nationwide lockdowns as the virus spreads.’

Surging virus infections and deaths — and the lockdowns they are forcing governments to impose — are the main stumbling blocks for investors, despite the rollout of vaccines that could allow life to return to some degree of normality.

Just days before he takes office, Biden unveiled his rescue package, which he said addressed ‘the twin crises of a pandemic and this sinking economy’.

The plans include an extra $1,400 cash hand-out for individuals — to top up the $600 in last month’s stimulus — a hike in the minimum wage to $15 an hour and billions of dollars to ramp up vaccinations so that 100 million are administered in 100 days.

There is also money for struggling state and local governments, the safe reopening of schools and an extension of unemployment benefits.

There is a worry that the bill could be jammed up in the Senate as lawmakers debate the impeachment of Donald Trump, which some observers say could also slow down confirmation hearings for Biden’s cabinet picks.