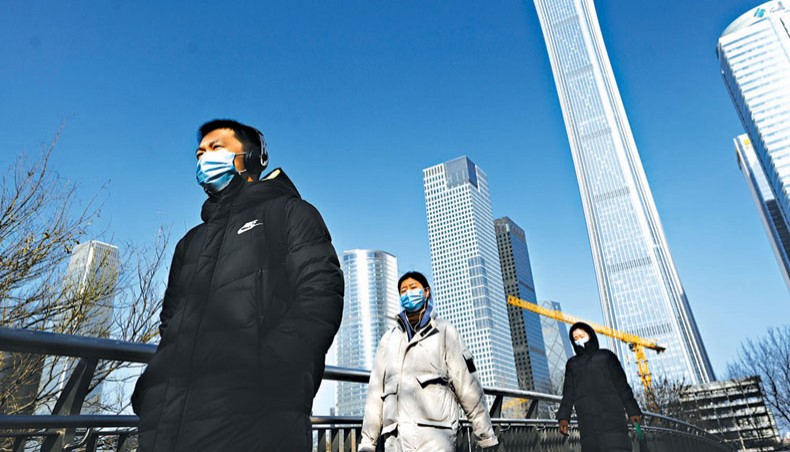 A group of pedestrians walk on an overpass in the central business district in Beijing on January 15, 2021. — AFP photo

China’s economy grew last year at its slowest pace since transformative market reforms of the 1970s, according to an AFP poll of economists, but finished the year strongly on an accelerating coronavirus recovery.

The average forecast of analysts from 13 financial institutions was a 2.0 per cent expansion for the world’s second-largest economy, down sharply from 6.1 per cent in 2019, itself a three-decade low.

China, where the COVID-19 pandemic broke out, was also the first country to emerge from its grip. It is expected to be the only major world economy to post positive 2020 growth.

Last year was a roller-coaster one for the country, with an unprecedented contraction in the first quarter caused by pandemic-related lockdowns quickly followed by a rebound as business and consumption returned.

The comeback gained pace through the fourth quarter, the analysts said, with encouraging data on consumer spending, factory activity and exports.

The poll produced an average forecast of around 6.3 per cent growth for the final quarter of 2020, putting China back on its pre-pandemic growth trajectory.

In the latest positive sign, exports jumped 18 per cent in December and were up 3.6 per cent for the full year, according to figures released Thursday.

Official GDP growth figures are due for release on Monday.

The analysts’ expectations exceed the International Monetary Fund’s forecast of Chinese full-year 2020 growth at 1.9 per cent.

Either figure would be the worst performance since 1976, when the economy shrank by 1.6 per cent.

Two years after that, former leader Deng Xiaoping set in motion a shift away from communist-style central planning, turning China into an industrial, trade and tech powerhouse.

China’s government last month warned the economic recovery was ‘not yet solid’, with virus clusters re-emerging amid cold winter weather and lingering concern over the pandemic situation in major export markets such as the United States.

The IMF last week said that activity would remain below capacity for the foreseeable future as China continues adjusting to a ‘pandemic normal’ in which technology and digitalisation of services assume a larger role due to social distancing and other pandemic impacts.

But that is still above the recent trend line for China, whose economy has slowed over the years as the ruling Communist Party transitions away from volatile growth dependent on investment and exports, towards a more mature economy driven by domestic consumption.

‘We think China’s economy will show a strong rebound this year,’ said Raphie Hayat, a senior economist with Rabobank.

He cited improving sentiment due to China’s demonstrated virus containment ability, potentially more stable US trade relations after President Donald Trump leaves office this month, and signs of a pickup in demand for Chinese exports.

Still, he adds that ‘we think the remaining part of the recovery will be slower’ as lagging growth in production catches up to an initially services-fuelled rebound.

‘The lingering uncertainty about when life will go back to, or close to, normal will keep Chinese consumers from consuming as much as they would have done without this health crisis,’ Hayat said.