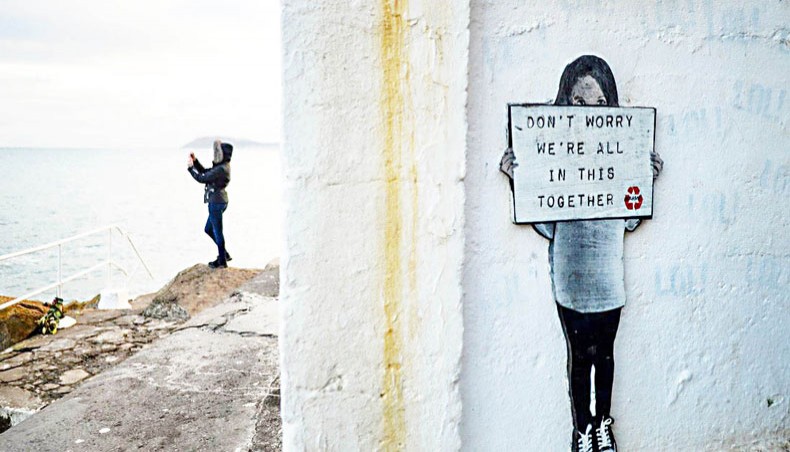 A woman takes a picture of the sea next to a shelter with an artwork that says ‘Don’t worry, we’re all in this together’ near Dublin, Ireland, on January 5, 2021. — PA Images/NurPhoto/Artur Widak

PORTUGAL assumes the European Union presidency at a crucial time that affects the political and social routines of so-called ‘normal times.’ From managing the vaccination against COVID-19 to Brexit to preparing for a post-Trump western world and a post-Merkel Europe, the challenges are enormous.

Instead of distinguishing, as in conventional use, between internal and international problems, I refer to structural issues that affect both the EU’s interior and exterior. I identify the following main issues: inequality and cohesion; historical identity and reparations; human rights and democracy; peace and the cold war.

THE EU comes out of the pandemic crisis, with a GDP drop close to nine per cent. The risk of poverty has increased, but it remains very uneven among the Union countries and points to a segmentation: between 25 per cent and 32 per cent for one group of countries and between 12 per cent and 17 per cent for the other group. Youth unemployment is 17.3 per cent but reaches 40 per cent in Spain. Considering that the fourth industrial revolution (artificial intelligence) will cause additional turbulence in this area, the EU must move towards a universal basic income policy that complements and does not replace other social policies. The legitimacy of this measure — today the subject of citizens’ initiative in the EU — was made clear in the words of António Guterres in his opening speech to the 75th session of the UN General Assembly in 2020: ‘the new generation of social protection policies (must) include universal health insurance and the possibility of a universal minimum income’. Now, without the United Kingdom, there may be room to deepen European policies. Still, such a project can only succeed based on greater internal democracy in the EU and reduced regional asymmetries.

The pandemic has shown the failure of neoliberalism and the priority given to the commodification of social life. The social democratic state is, for now, the only alternative to the barbarism of the deadly economy that seeks to transform the pandemic’s lethality into a form of social Darwinism that solves the problems of social security.

Health is a public good, not a business. The national health services need to regain their centrality, which cannot be achieved by mere emergency reinforcement. Despite having financed almost a billion euros for research on vaccines’ production, the EU is buying them at a high price; perhaps it is the business of the century for the private companies that produce them. The contract details are not known, especially concerning liability for possible side effects.

And we should not forget that among the ten countries with the most millionaires, three are part of the EU (Germany, France, Italy) and that in Germany, 12 per cent of the wealth increase among the super-rich occurred in the area of health.

EUROPE is still struggling to come to terms with the past, the more remote past, and the more recent one. Colonialism was not civilising progress but rather a violent instrument to plunder the wealth of much of the extra-European world.

Such a long historical process involved many other relationships, but the main one was looting, which continues today. The relative well-being of Europeans is not conceivable without this plunder.

Transfers of resources from the global south to the global north continue to be many times greater than those in the opposite direction. The refusal to decolonise the history of Europe is at the root of racism, which continues to tarnish relations between European citizens, of the misguided immigration policy, of the transformation of the Mediterranean into a cruel liquid cemetery. It is also the refusal to decolonise history that opens the door to the growth of xenophobia, Islamophobia, anti-Semitism, and, in general, to the rise of the extreme right.

In times of COVID-19, the best way for Europe to reconcile itself with the world would be to contribute actively to ensure that the less developed world, much of which was once a European colony, had rapid and free access to coronavirus vaccination. Historical identity should also be present in relations with countries whose membership in Europe became a political dispute, especially in Russia and Turkey. With 27 million dead in World War II, the Russians contributed most to the liberation from the Nazi yoke.

TODAY, Europe is proud to be the continent that most consistently respects democracy and human rights. Without going into the merit of this statement, I would like to point out what it means to take these values seriously. Firstly, it means recognising that there have been severe setbacks in this area over the last thirty years. The pandemic has shown that the degradation of social policies carried out by the imposition of neoliberal recipes, greatly promoted by the European Commission, made it more challenging to defend life.

On the one hand, the worsening of social inequalities, the erosion of labour rights, and the consequent precarisation of lifestyles are some of the variables most directly related to the virus’s mortality rate. On the other hand, the degradation of public services made it impossible for the states to provide the best response to the health emergency.

As we enter an intermittent pandemic, taking human rights seriously means immediately reversing public investment logic. A stable policy promoting human rights and democracy forces us to confront without calculation the degradation of these values in Hungary and Poland carried out in the name of a so-called ‘anti-liberal democracy,’ a contradiction in terms. Liberal democracy can and should be criticised for being too little, not too much.

TAKING human rights and democracy seriously means pursuing with conviction a peace policy, which has both internal and external repercussions. Contrary to what would be expected in a period of a global health emergency, the new cold war between the United States and China has become more violent in recent months. Faced with its decline as the world’s leading power, the United States has been using increasingly aggressive mechanisms to contain what they call ‘Chinese imperial expansionism.’

The magazines that formulate US foreign policy (eg, Foreign Affairs) speak openly of the possibility of armed conflict in the next ten years. The powerful military-industrial complex supports them. The United States wants to involve all its allies in this process and demands unconditional solidarity. Since the most unequivocal US superiority over China is military and since the EU is an insignificant partner in this field, an alliance on these terms is not in Europe’s interest unless the North Atlantic Treaty Organisation becomes an instrument of military aggression (more so than it has been in recent times, from the Balkans to Libya.)

The terms that matter are these: in the long historical period (when the United States did not exist), China was, until the 19th century, the largest economic power in the world; according to McKinsey, in 2040, China will represent 40 per cent of the total consumption of goods and services; China has just promoted the Comprehensive Regional Economic Partnership, which is much broader than the European common market; India, currently governed by the extreme right, cannot be an unusual ally of the EU just because it does not belong to this partnership. The EU cannot be an unconditional ally, either of China (it is not a democracy and human rights are seen as obstacles) nor of the US (which only accepts unilateralism; Biden will be less pro-European than imagined; the fight against the privileges of North American communications giants — Google, Apple, Facebook, and Amazon — must continue).

Furthermore, the EU must quickly free itself from the persecution crusade against Iran and Venezuela. Will the puppet Juan Guaidó, who is no longer even a parliament member and is being challenged by the Venezuelan opposition to Nicolás Maduro, continue to be considered the country’s legitimate president and preside over the plundering of Venezuela’s international reserves?

Portugal has the right conditions to be the EU’s helmsman in this period. It has performed well in defending life during the pandemic, which is unequivocally evident in the data; the politicisation of the pandemic was relatively low; it maintained a level of political cohesion and consensus with the scientific community that only the most reactionary right-wing does not recognise; despite the systemic behaviour of the SEF (Foreigners and Borders Service), it has a more favourable immigration policy than other European countries; being one of the United Kingdom’s traditional allies, it can be an architect of understanding in a period of friction. But it will be a pity if it does not take advantage of this enviable position to free itself from the blackmail of frugal countries and fully comply with the basic health laws, giving the National Health Service the centrality it deserves.