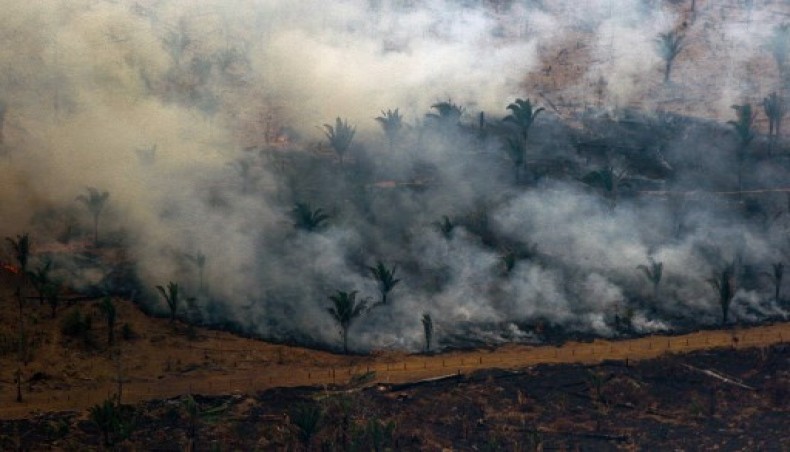 This file photo taken on August 24, 2019 shows an aerial view showing smoke billowing from a patch of forest being cleared with fire in the surroundings of Boca do Acre, a city in Amazonas State, in the Amazon basin in northwestern Brazil. -AFP photo

The world is on course for a ‘catastrophic’ temperature rise this century, the United Nations said on Thursday as it confirmed that 2020 rivalled 2016 as the hottest year on record.

The relentless pace of climate change is destroying lives, said secretary-general Antonio Guterres as the UN’s World Meteorological Organisation said 2011-2020 had been the warmest decade recorded.

2020 ‘rivalled 2016 for the top spot’, according to the WMO’s consolidation of five leading international datasets.

The La Nina cool phase of the Pacific Ocean surface temperatures cycle ‘put a brake on the heat only at the very end of the year,’ the WMO said.

The UN weather agency said that the warmest three years on record were 2016, 2019 and 2020, and the differences between them in average global temperatures were ‘indistinguishably small’.

The 2015 Paris Agreement on climate change calls for capping global warming at well below 2 C above the pre-industrial level, while countries will pursue efforts to limit the increase to 1.5 C.

The WMO believes there is at least a one in five chance of the average global temperature temporarily exceeding the 1.5 C mark by 2024.

‘The confirmation by the WMO that 2020 was one of the warmest years on record is yet another stark reminder of the relentless pace of climate change, which is destroying lives and livelihoods across our planet,’ said UN chief Guterres.

‘We are headed for a catastrophic temperature rise of 3-5 C this century. Making peace with nature is the defining task of the 21st century. It must be the top priority,’ he added.

The WMO said that the standout weather features of 2020 were the sustained heat and wildfires in Siberia and the low Arctic sea ice extent, plus the record-breaking Atlantic hurricane season.

‘The global signal from human-induced climate change is now as powerful as the force of nature,’ said WMO secretary-general Petteri Taalas.

‘Heat-trapping gases in the atmosphere remain at record levels and the long lifetime of carbon dioxide, the most important gas, commits the planet to future warming,’ he added.

La Nina is expected to continue into early to mid-2021.

The effects of La Nina — and El Nino at the opposite end of the cycle — upon average global temperatures are typically strongest in the second year of the event, said the WMO.

The extent to which La Nina’s cooling effects in 2021 may temporarily diminish the overall long-term warming trend remains to be seen, the organisation said.

The WMO will publish its State of the Climate in 2020 final report in March.

In figures from the US space agency NASA — one of the five datasets consolidated by the WMO — 2020 was hotter than 2016 by less than a tenth of a degree.

Last year was ‘a very striking example of what it’s like to live under some of the most severe effects of climate change’, said NASA research meteorologist Lesley Ott.

Gavin Schmidt, director of NASA’s Goddard Institute for Space Studies, added: ‘The natural processes Earth has for absorbing carbon dioxide released by human activities — plants and the ocean — just aren’t enough to keep up with how much carbon dioxide we’re putting into the atmosphere.’