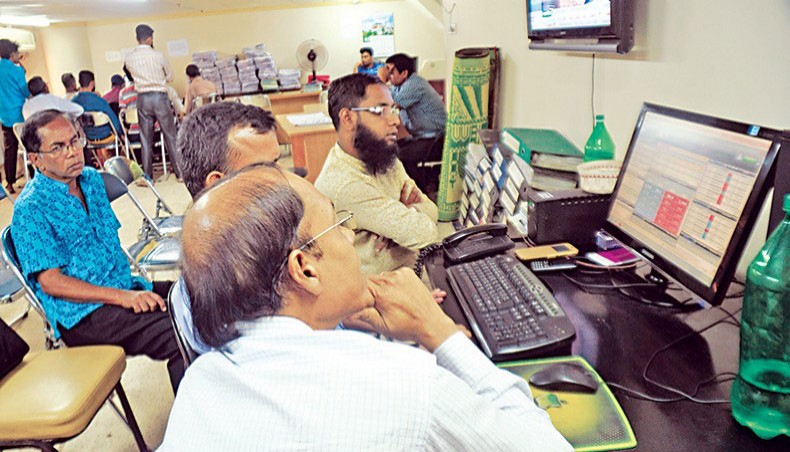 A file photo shows people monitoring share price movements on a computer screen at the Dhaka Stock Exchange in the capital. Dhaka stocks soared on Thursday as investors went for a buying binge after the Bangladesh Securities and Exchange Commission backtracked on its share price deviation probe move and set the upper ceiling on margin loan rate. — New Age photo

Dhaka stocks soared on Thursday as investors went for a buying binge after the Bangladesh Securities and Exchange Commission backtracked on its share price deviation probe move and set the upper ceiling on margin loan rate.

The BSEC on Tuesday had instructed the Dhaka and Chittagong stock exchanges to investigate unusual price movements of listed companies. DSEX, the key index of the Dhaka Stock Exchange, lost 91 points on Wednesday.

Following the plunge, the BSEC on Wednesday postponed the effectiveness of the instruction due to its adverse impact on the market.

The market capitalisation on the DSE hit an all-time high on Thursday as it reached Tk 5,01,709.6 crore for the first time, according to the DSE web site.

The BSEC on Wednesday also set the maximum limit on margin loan rate at 12 per cent that drew attention of many investors, they said.

Previously, brokerage houses and merchant banks used to charge their clients 15-30 per cent against margin loans.

Share prices of BEXIMCO, LankaBangla Finance, City Bank, Summit Power and LafargeHolcim Bangladesh soared by more than 9 per cent each on Thursday.

The market has been gaining in recent weeks due mainly to a decline in banks’ interest rate that has pushed a section of people to invest their funds in the stock market for making better returns, market operators said.

Robi Axiata Limited, which made its debut on December 24, soared by the maximum limit allowed on Thursday to close at Tk 70.1 a share.

Share prices of the telecom operator have been soaring since its debut.

Average share prices of miscellaneous, non-bank financial institution, bank and pharmaceutical sectors advanced by 6.54 per cent, 3.74 per cent, 2.45 per cent and 1.47 per cent respectively.