January 6 putsch and its aftermath 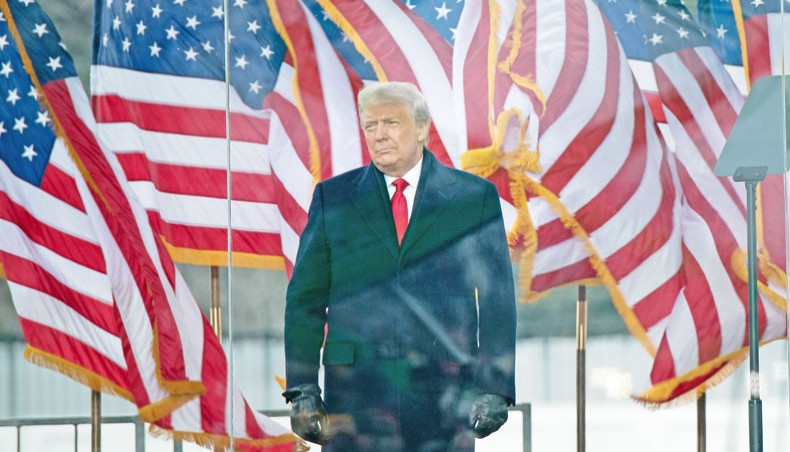 US president Donald Trump arrives to speak to supporters from The Ellipse near the White House on January 6 in Washington, DC. — Agence France-Presse/Brendan Smialowski

DO NOT doubt that the United States is going through its gravest political crisis since the bloody Civil War of 1861–65. Two unprecedented events on  January 6 should make that evident. The first was an attempted political coup d’état, an illegal attempt to seize power — ie, a putsch — by the defeated president Trump and his acolytes in the US Congress seeking to overturn the presidential election results of 2020 and prevent a peaceful and orderly transfer of power. Second, for the first time in more than 200 years, the US Capitol building was attacked by an insurrectionist mob. The last time such an attack happened was when the British army invaded Washington DC during the war of 1812 and burnt down both the Capitol building and the White House. Another way to see the historical poignancy of last Wednesday was to witness the Confederate flag flying inside the Capitol building in the arms of an intruder. In the Civil War of 1861–65, when more than half a million Americans died fighting each other to preserve the United States and abolish slavery, the Confederate flag never reached inside the Capitol building, even though the rebel Confederate forces reached Washington DC’s outskirts. That picture will remain a shame and disgrace that the United States will not easily forget.

What transpired on January 6 was extremely alarming. However, how that day ended and how events ended the next morning also testify to the strength of US democracy. January 6 had four acts. In the first act, six Republican senators and 121 House representatives formally objected to certifying November’s presidential election results in Arizona and an even larger number to Pennsylvania’s results. Unfortunately, there is enough ambiguity in US laws that allowed them to raise these objections. Under the American constitution, each state legislature and the governor certifies both the popular votes and the electoral college votes of that state. The US Congress’s role is that of the teller to announce and tally these votes and formally declare the election’s results. However, should there be a dispute within a state, Congress can step in. The last time it happened was in 1876 when a few states such as South Carolina sent it two different slate of electors, and the US Congress had to decide.

In the election of 2020, there have been no such disputes. House legislatures and governors across the country, many of them Republicans, certified the results. Further, the defeated Trump’s legal cases against election results were rejected in 60 cases by 90 judges, many of whom are Republican. The US Supreme Court, where Republicans have appointed six of the nine judges, dismissed the Trump campaign’s case out of hand by refusing to hear it. The fact that even after all this, six Republican senators and 147 Congress representatives chose to object meant that they sought to disenfranchise 80 million Americans who voted for Joe Biden to be president. Even worse, they were challenging the cherished tradition of a smooth and peaceful transfer of power. The Republican majority leader of the senate, Mitch McConnell, put the matter most starkly: if these objections by his fellow Republicans succeeded, they would put American democracy on a death spiral.

In the days leading up to January 6, Trump pressured Republican officials in the swing states to overturn election results in his favour. The most notorious example of this was his call last weekend to the Republican secretary of state of Georgia asking him to find another 11,780 votes for Trump; to his credit, the official refused and stood firm against the president. In the penultimate act, Trump put pressure on his hitherto steadfastly loyal vice-president Pence, even on January 5, to use his office as Congress’s electoral college session’s presiding officer to refuse to certify the electoral college votes. Showing judgement and integrity, Pence refused to do Trump’s bidding, correctly noting that he, Pence, lacked authority to overturn 2020 election results.

That led to the second act of January 6. As the Congress was about to start its session to examine and certify the electoral college results of the 2020 elections, Trump was finishing his address to a crowd of his supporters at a self-styled ‘save America rally.’ Using qualities that have propelled him into office — fear-mongering, incitement, blatant racism and a barely concealed exhortation to violence — Trump urged them to ‘fight’ using the word more than a dozen times. He also declared: ‘You will never take back our country with weakness… you have to show strength, and you have to be strong.’ The outdoing Trump, and his lawyer sidekick, Rudy Giuliani, declared to the crowd that this day would be a ‘trial by combat.’ Then, directly violating his oath of office to defend the US constitution, he urged the crowd to walk to the Capitol to pressure ‘weak Republicans’ to reject the election results of 2020. The compulsive lying that afflicts Trump was on display again when he promised his supporters that he would join them in the walk to the Capitol and provide evidence to show that the election was rigged. Of course, he did not join them in the march and had no evidence to provide.

In the third act, at the end of Trump’s speech, the ‘save America’ rally turned into a march to the Capitol building. Spearheading it were right-wing extremists and white supremacists, displaying theatrical symbols and costumes. Also mingled in that group were a large number of the bizarre and disturbed QAnon conspiracy believers. Trump’s extremist supporters’ feverish state is palpable from QAnon members’ belief that a liberal elite Satan-worshipping paedophile in government, business, and the media are waging a secret war against their champion Trump. The whole crowd perhaps numbered a few tens of thousands — far smaller than the historical marches of several hundred thousand who joined the Women’s March in 2017 or the Civil Rights and anti-Vietnam demonstrations in the 1960s. On reaching their destination, the demonstrators, now transformed into insurrectionists, faced a surprisingly unprepared Capitol police and forced it to retreat. The intruders then made their way inside the building; guns were drawn by security, one protestor shot, and one police officer killed by demonstrators. The insurrectionists were chanting slogans to ‘hang Mike Pence’ and shouted they were ‘coming after’ speaker Pelosi. The Capitol police escorted senators and representatives to safe rooms. Later in the afternoon, reinforcements from Washington DC, Maryland, and Virginia police and National Guards came to help and ‘secured’ the Capitol building. The failure of security and the evident impunity with which the overwhelmingly white mob ransacked the Capitol building has raised questions forced resignations and launched investigations.

The final act of January 6 was a testimony to the strength of the United States’s democratic institutions. When they were still sheltering from the attackers, speaker Nancy Pelosi of the Democratic Party and senate majority leader Mitch McConnell of the Republican Party, with no love lost between them, quickly reached an agreement. The constitution demanded that the Congress should continue its session to examine and certify the electoral college votes and the US 2020 presidential elections. Accordingly, the United States congress resumed its session at 8:00pm the same day, January 6, when vice-president Pence called for order, saying, ‘Let’s get back to work.’ Some six Republican senators reversed their earlier decision to object. Unfortunately, six others did not. Still, at 4:00am on January 7, the US Congress certified the results of the electoral college and Joseph Biden Jr and Kamala Harris as the next president and the ice-president of the United States.

Later on January 7, clearly under pressure from his lawyer and staff that he could face legal consequences, Trump declared that he had accepted the certification results by the US Congress. But clearly, this was too little, too late. Biden and Harris’s next administration will come to office facing profound immediate and long-term challenges, even deeper than what Obama and Biden met in 2009. The president-elect Biden has declared his intention to be focused on the future. But the United States faces a tough question: should the actions of the outgoing president who brazenly breached his oath of office and incited violence against the Congress to go unpunished and unaccountable, setting a dangerous precedent? The US House of Representatives has decided that there has to be accountability. This evening on January 13, a week from the putsch, the Democratic majority, joined in by 10 Republicans, voted 232–197 to impeach president Trump for a second time on the charge of ‘incitement to insurrection.’ Left unclear and probably unlikely is whether the current Republican majority US senate will agree to convict, even though its leader, Republican senator Mitch McConnell has reportedly said that Trump’s offences are impeachable.

This evening, security agencies are reporting preparations for armed demonstrations and possible assaults by Trump’s extremist supporters on all 50 state Capitols and again on the US Capitol to disrupt Joe Biden’s inauguration. About 20,000 national guardsmen are now in Washington DC to provide additional security. But beyond police and soldiers, it is even more critical that the Congress displays unambiguous leadership and fulfils its oath to defend the US constitution by clarifying that no one, not even a president, is above the law.

Dr Ahmad Ahsan is director, Policy Research Institute of Bangladesh, a former World Bank economist and a Dhaka University teacher. He is also a member of the US Democratic National Committee.