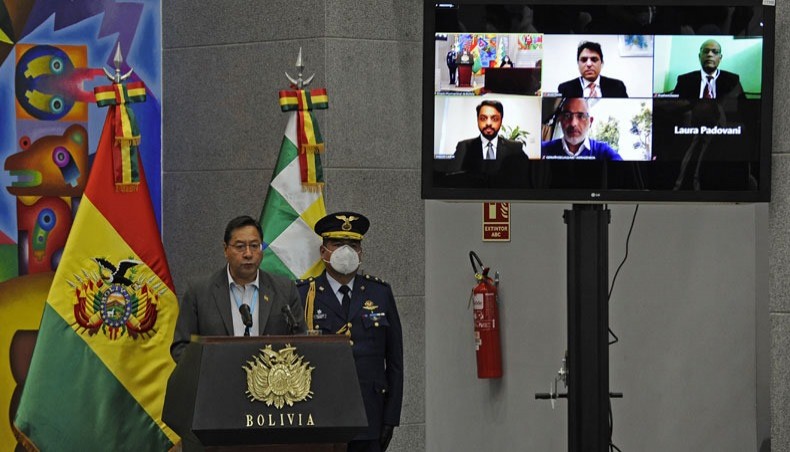 Bolivia's president Luis Arce speaks during the signing ceremony of the agreement with the Serum Institute of India for the purchase of 5 million of COVID-19 vaccines from the AstraZeneca laboratory at the Casa Grande del Pueblo government palace in La Paz, on 13 January 2021. -- AFP Photo

Amid the global scramble for coronavirus vaccines, Brazil said on Wednesday it would import two million doses of AstraZeneca’s Covishield jab from India.

The inventory would add to some 10 million doses of China’s CoronaVac as Brazil gears to start its vaccination campaign this month.

The biggest country in Latin America is the second-hardest hit globally by the pandemic, as the novel coronavirus has killed more than 204,000 people out of Brazil’s population of 212 million.

Brazil has sent a plane to India, equipped with special freezers, to fetch the AstraZeneca vaccines — developed by the British-Swedish pharmaceutical firm in conjunction with Oxford University —  a health ministry statement said.

The plane should be back on Saturday — the day before Brazil’s Anvisa health regulator is meant to announce whether or not it will give the green light for Covishield and CoronaVac to be rolled out in a nation-wide inoculation campaign.

Vaccination could begin ‘within a maximum of five days after authorisation,’ the ministry said.

‘We will vaccinate in January and Manaus will be the first to be vaccinated,’ said health minister Eduardo Pazuello, referring to the hard-hit city in the Amazon rainforest.

In Manaus, where there were haunting scenes last April of mass graves and corpses piled in refrigerator trucks, the health system is once again saturated as Brazil battles a second wave of infections.

Brazil is counting on its Fiocruz Institute to produce another 210 million doses of the AstraZeneca-Oxford vaccine in the coming months.

While more than 50 countries in the world have started vaccinating their populations, efforts have gotten off to a slow start in Brazil.

On Tuesday, Brazil said CoronaVac was shown to be about 50 per cent effective in trials.

The shot is at the center of a political dispute between president Jair Bolsonaro, who has repeatedly tried to discredit it, and Sao Paulo state Governor Joao Doria, who backs it.

Doria is expected to challenge Bolsonaro in presidential elections next year.

The country, with a population of 11.5 million, has seen more than 9,450 coronavirus deaths since the epidemic began, which hit Latin America particularly hard.

Earlier Wednesday, the World Health Organisation said about 28 million vaccine doses have been administered so far in the fight against the pandemic, largely in the world’s wealthiest countries.

The UN agency has warned that herd immunity, achieved only once a certain threshold of people have been vaccinated, is unlikely to be achieved this year.