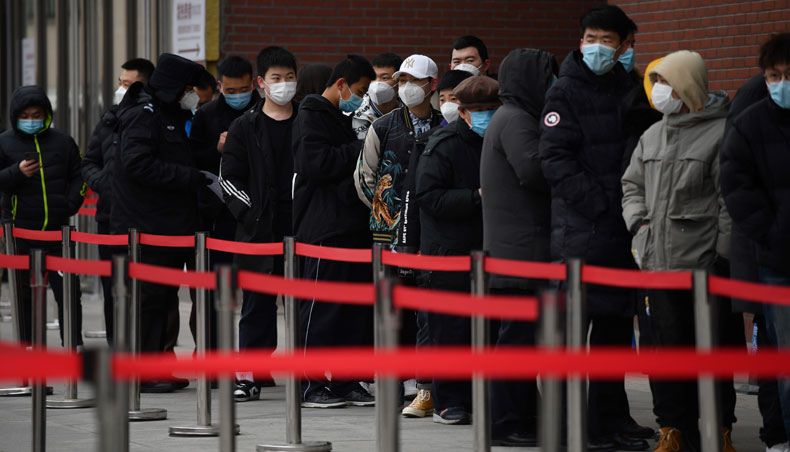 People line up outside a hospital to get COVID-19 tests in Beijing on January 14, 2021, on the same day China reported its first death from COVID-19 in eight months, as the country battles to contain a resurgence in cases and prepares for the arrival of an expert team from the WHO. — AFP photo

China on Thursday reported its first death from COVID-19 in eight months as the country battles to contain a resurgence in cases and prepares for the arrival of an expert team from the WHO.

More than 20 million people are under lockdown in the north of the country and one province has declared an emergency, as daily COVID-19 numbers climb after months of reporting only a handful of daily cases.

China had largely brought the virus outbreak under control through a series of strict lockdowns and mass testing. But another 138 infections were reported by the National Health Commission on Thursday – the highest single-day tally since March last year.

No details were given by health authorities about the latest death, except that it occurred in Hebei province, where the government has placed several cities under lockdown.

Neighbouring Xingtai, home to seven million people, has also been locked down since last Friday, as have the five million people of Langfang city.

In a sign of infections spreading, north-eastern Heilongjiang declared an ‘emergency state’ on Wednesday, telling its 37.5 million residents not to leave the province unless absolutely necessary and saying public gatherings would be cancelled.

No deaths have been reported in mainland China since May last year, and the official death toll now stands at 4,635.

The death comes as China readies for the arrival of an expert team of scientists from the World Health Organisation, who will start a politically sensitive investigation into the origins of the COVID-19 pandemic.

The 10-strong team is expected to arrive on Thursday in Wuhan, the central Chinese city where the virus was first detected in late 2019.

Peter Ben Embarek, team lead for the mission, said that the group would start with a two-week quarantine at a hotel due to China’s border requirements.

‘And then after the two weeks, we would be able to move around and meet our Chinese counterparts in person and go to the different sites that we will want to visit,’ he said.

‘The idea is to advance a number of studies that were already designed and decided upon some months ago to get us a better understanding of what happened,’ he said.

The long-delayed trip comes more than a year after the pandemic began and amid political tensions over allegations that Beijing tried to thwart the project.