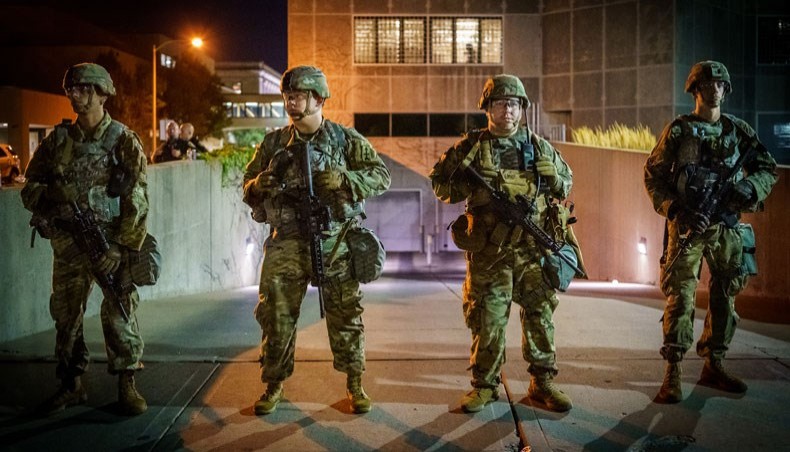 In this file photo National guards stand in a line during a protest against the shooting of Jacob Blake in Kenosha, Wisconsin on August 27, 2020. -- AFP Photo

The city at the heart of US democracy has been a shadow of itself during pandemic shutdowns, but now it is also under heavy guard after the January 6 deadly attack by Trump supporters on the Congress building.

National Guard soldiers in body armor and camouflage spent the night inside the Capitol, their black rifles leaning against the polished stone walls of the building’s halls.

Some 20,000 National Guard soldiers are expected in Washington for Biden’s inauguration, more than the combined number of US troops officially deployed to Iraq and Afghanistan.

Lawmakers on Wednesday formally accused Trump of inciting the mob that attacked the Capitol last week in a failed effort to stop Congress from finalizing the president’s November loss to Joe Biden.

The House voted 232-197 to impeach the president, with 10 members of Trump’s Republican Party joining 222 Democrats.

The Capitol building grounds are ringed by a security fence erected after the attack, similar to the one raised around the White House months ago when protests erupted nationwide against police killings of African Americans.

The US capital, known for its historical monuments, museums and crowds of tourists, has had a rough ride over the past 12 months.

Navigating the once humming downtown on foot, it is difficult to tell which buildings have been shuttered by the pandemic and which simply shut up shop due to the violent protests the city has been seeing.

‘This is my first time in a year. There’s usually people walking all over the place. This is very, very quiet. I almost think it’s like a ghost of itself,’ said Jaime, a mother from Maryland who did not wish to give her full name.

Hordes of schoolchildren who normally travel from all over the country to visit museums and see the White House now stay away, as do most foreign tourists.

The hectic jostle of politicians, lobbyists and lawyers on the street has also fallen quiet, while the large metro stations that bring workers in from suburbs are quiet and little-used.

The city of more than 700,000 inhabitants is subdued, one week before the inauguration of Biden on the steps of the Capitol.

‘The city is basically desolate,’ said Nadine Seiler, 55, who has been demonstrating every day since the end of October near the White House in favor of anti-racist causes.

‘Usually it’s very stressful, but here it’s like everybody’s away on vacation,’ she added.

As in many Western cities, many workers have been signing in from home — especially staff at big institutions headquartered in Washington such as the World Bank and the IMF, as well as the countless government agencies.

Eateries must try to survive by erecting tents and marquees along sidewalks, and tempting customers to sit down next to heaters of varying efficiency battling the winter cold.

‘I went to the Christmas market that’s gone, all that’s gone. You go into bars, packed bars — it’s gone,’ laments Timothy Bartholomew, a resident of Arlington, just over the Potomac River in neighboring Virginia.

According to the specialist site Eater, nearly 70 restaurants have permanently closed in Washington since the start of the pandemic, and many others are boarded up with no certainty they will ever reopen.

Violent protests and unrest have shaken Washington repeatedly in the last year.

After the death of George Floyd at the hands of the police in Minneapolis in May, Washington became one of the hotspots of nationwide anti-racist demonstrations.

But over the months, clashes between anti-racism activists and pro-Trump protesters have brought an edge of tension to the city.

Roads and sidewalks have been gradually shut down around the White House, with the security cordon now holding people far back from Trump’s residence.

Police patrol vehicles keep their flashing lights on at all times and block streets normally streaming with traffic, while high metal fences surround many government buildings such as the US Treasury.

Crowds cheering Biden’s inauguration on January 20 will be thin on the ground, as authorities have urged Americans to avoid the city, fearing more violence.