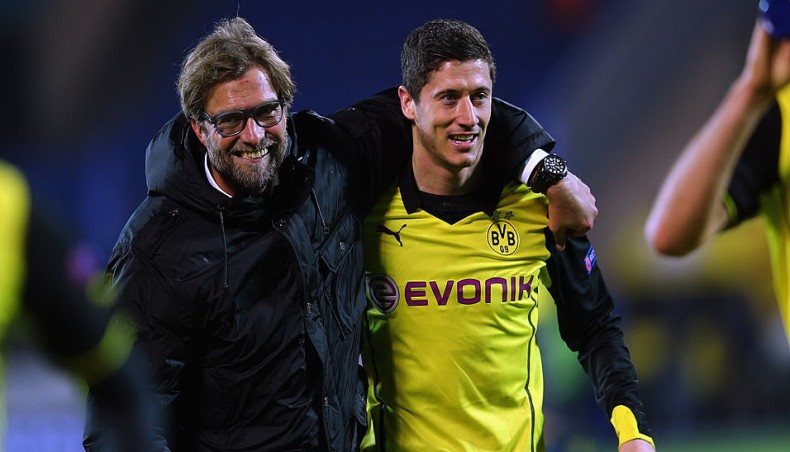 Robert Lewandowski has opened up about the role Jurgen Klopp played in his career as the Bayern Munich striker continues to bang in the goals this season for the European champions.

Last season, Lewandowski, 32, helped Bayern sweep the treble of Champions League, Bundesliga and German Cup titles - finishing as top-scorer in each - with a total of 55 goals from 47 matches in all competitions.

The Poland striker has already netted 20 Bundesliga goals this season and in a piece written for The Player's Tribune, Lewandowski puts his success down to Klopp, 53, when he coached him at Borussia Dortmund.

‘Jurgen was not only a father figure to me,’ wrote Lewandowski.

‘As a coach, he was like the 'bad' teacher, the one who was strict with you. The one who put pressure on you and did everything to get the best out of you.’

Klopp plucked Lewandowski from the Polish league as a raw talent in 2010, becoming one of Europe's best strikers by the time he signed for Bayern in 2014, while Klopp left Dortmund the year after to coach Liverpool.

‘He was not content to let you be a B student, you know? Jurgen wanted A+ students. He didn't want it for him. He wanted it for you,’ wrote Lewandowski.

He has scored 256 goals in the Bundesliga for Bayern and Dortmund, making him the league's top-scoring foreigner.

He could soon eclipse Klaus Fischer's tally of 263 goals to become the league's second highest goal-scorer behind only Bayern legend Gerd Muller.

'The Bomber, as Muller was known, bagged 365 goals in Germany's top-flight, including 40 in the 1971/72 season, a record which still stands.

‘Just playing for Bayern is an educational experience really, because the demands are so high, and the club culture is so professional -- you are forced to raise your standards.’