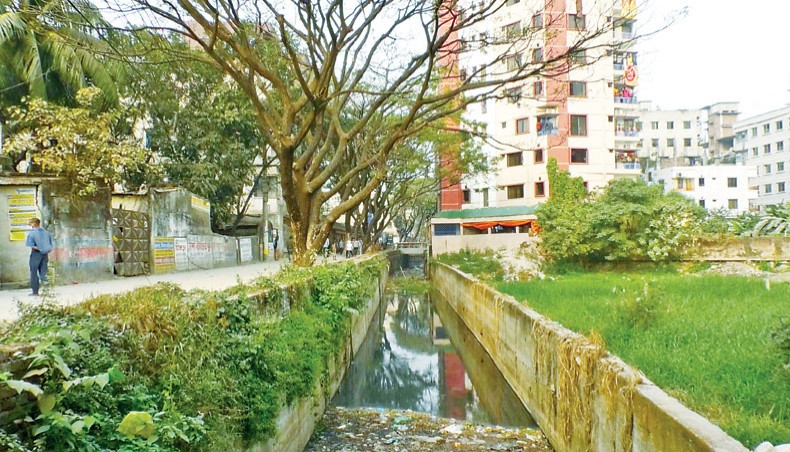 Jirani Khal is turned into a narrow culvert following encroachment on a portion of it at Kadamtala of Basabo in Dhaka. This photo was taken on Wednesday. — Abdullah Apu

A 15-foot-wide concrete road was constructed encroaching on the 40-foot-wide Jirani Khal reducing the water body to 17-foot-wide drain while rest of the canal was grabbed by local influential people at Kadamtola of Basabo in the capital.

Dhaka WASA is the immediate past custodian of Dhaka’s 26 canals including the Jirani Khal, the last remaining water body in the area.

Dhaka South City Corporation chief estate officer Rasel Sabrin said that during a survey, the DSCC found that the canal was around 22-60 feet wide in different locations and Dhaka WASA embanked both the banks and reduced it to 16-18 feet wide drain creating an opportunity for the local influential people to grab the rest of the canal.

Locals said that people gradually earth-filled the canal and they have been using the mud road for the last 20 years but none of the government agencies interfered.

The DSCC on Wednesday conducted an eviction drive to reclaim the canal but the mobile court halted the operation after demolishing 12 temporary bridges on the canals.

While asked, Rasel Sabrin said that after considering public welfare and recommendations of DSCC planners they would take further decision whether the canal will be reclaimed completely or partially.

‘The road constructed on the canal was aimed at serving the public needs,’ he said.

DSCC executive magistrates Tanjila Kabir Tropa and AH Irfan Uddin Ahmed conducted the mobile court and fined Tk 25,000 from a number of people for illegally building bridges on the canals.

Portions of three multi-storey buildings and some makeshift structures were also demolished during the drive.

Dhaka WASA officials said that they asked the DSCC not to construct a road on the canal but local councillor and other political leaders and officials of the DSCC went on with the project that narrowed the canal down, affecting its water flow.

The WASA, under a project financed by the World Bank, has encroached on 50 per cent of Dhaka’s nine canals — Jirani Khal, Sutibhola Khal, Mohakhali Khal, Shahjadpur Khal, Sangbadik Colony Khal, Ibrahimpur Khal, Ramchandrapur Khal, Katasur Khal  and Dwigun Khal and converted them into narrow concrete channels in the past one decade, according to WASA documents.

The 15-foot-wide road on Jirani Khal was constructed after filling the area with wastes and construction debris.

During a visit on Wednesday, a pump house constructed by Dhaka WASA was also found on the canal.

Local Abul Hasan, 60, said that if the city corporation evict multi-storey buildings and other illegal structures for grabbing the canal, the authority should also restore the canal by reclaiming the road.

Bangladesh Institute of Planners general secretary Adil Mohammad Khan said that Dhaka residents suffer acute water stagnation in the rainy season due to the grabbing of canals which constituted the natural drainage system of the city.

The government agencies, realtors and individuals have grabbed Dhaka canals over the years as the agencies concerned were not active in protecting them.

‘If the authority fails to restore canals properly the city will continue to lose out on liveability,’ he said.

On December 31, after huge criticism over years of mismanagement, the government handed over the drainage maintenance responsibility from Dhaka WASA to the city corporation for better management.

After taking the responsibility, the two mayors of the city corporations in Dhaka vowed that they would restore navigability of the canals after evicting all grabbers.

The National River Conservation Commission in October handed over to different agencies a report on 77 canals and the nature of encroachment on them though the Dhaka deputy commissioner’s office and claimed that it has been many years that the number of canals had reduced to 54.