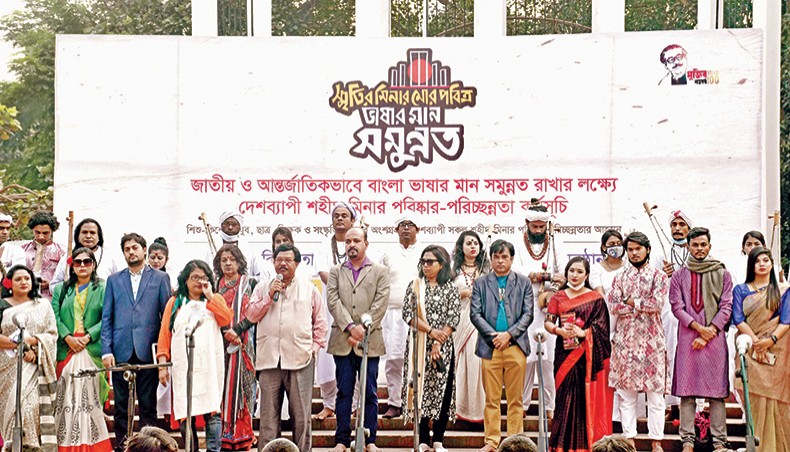 Bangladesh Shilpakala Academy officials and artistes pose for a photo at Central Shaheed Minar at a daylong cultural event and art camp as part of a cleanliness campaign aimed at keeping Shaheed minars clean across the country on Wednesday. — Press release

The event was jointly organised by Bangladesh Shilpakala Academy and People’s Theatre Association as part of a cleanliness campaign which aimed at cleaning the Shaheed minars across the country.

Biren Shome created a painting depicting people placing floral wreaths at the Central Saheed Minar while three birds are seen in flight in the background.

‘The journey towards independent Bangladesh began with the language movement. I thank the academy for organising the art camp. We are creating paintings on the language movement and International Mother Language Day. I urge the government to take an initiative to clean the Central Saheed Minar once a week,’ said Biren Shome.

‘Central Shaheed Minar reminds us of our love and sacrifice for our mother tongue. The monument should be kept clean all the time. Besides Dhaka, we are holding similar programmes at all districts with the help of district Shilpakala Academy branches and local artistes,’ Liaquat Ali Lucky told New Age.

Lucky also said that from now on the BSA will organise the programme at Central Saheed Minar every month. He also spoke about the academy’s upcoming event marking the International Mother Language Day.

‘We will arrange a light and sound show at Central Saheed Minar in February. The production will portray the history of the language movement,’ added Liaquat Ali Lucky.

In the afternoon, Bangladesh Shishu Acrobatic Daal entertained the audience performing a stunning display of balance and tricks.

Child artistes of the academy presented a production comprising songs and dance. The production titled ‘Janmashatabarshe Jatir Pita’ has been written and directed by Liaquat Ali Lucky.