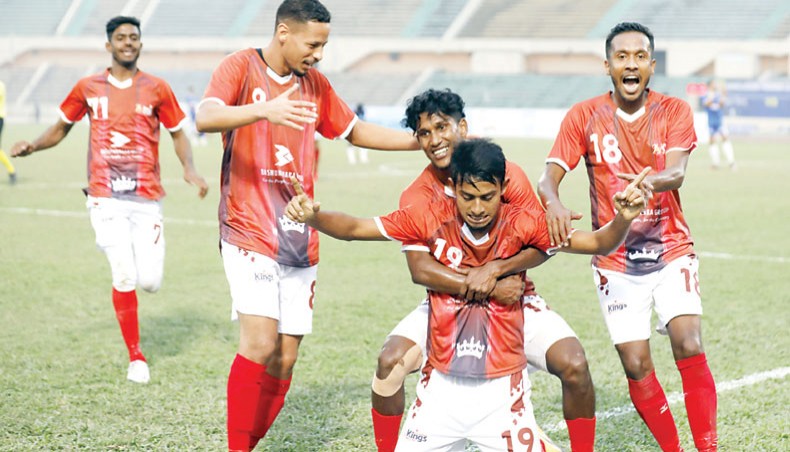 Holders Bashundhara Kings started their title defense of the Bangladesh Premier League with a 2-0 win against Uttar Baridhara Club in the opening match at the Bangabandhu National Stadium on Wednesday.

Argentine forward Raul Oscar Becerra and midfielder Mohammad Ibrahim scored one goal apiece in either half of the match for the winners.

Kings could have taken the lead in the 19th minute of the match but Becerra’s header rebounded from the crosspiece following defender Bishwanath Ghosh’s cross from the right.

The Argentine finally gave Kings the lead in the 35th minute with a header after a cross by Bishwanath.

Ibrahim doubled the lead in the 55th minute, winning the ball from couple of Baridhara defenders on the top of the box before placing the ball home past Baridhra keeper Mamun Alif.

Kings Spanish coach Oscar Bruzon termed the first half-an-hour of the game challenging as his charges looked fatigued as they played the match just two days after winning their second consecutive Federation Cup title on Sunday.

‘It was a challenge, especially recovery of the players, mentally and physically after the tough semi-final and final in the Federation Cup…We had to be cautious in the first 30 minutes but after that we had full control over the game,’ said Bruzon after the match.

Another potential title contender of the 13-team league, Abahani Limited will take on Bangladesh Police FC in today’s game at 4:00pm at the same venue.