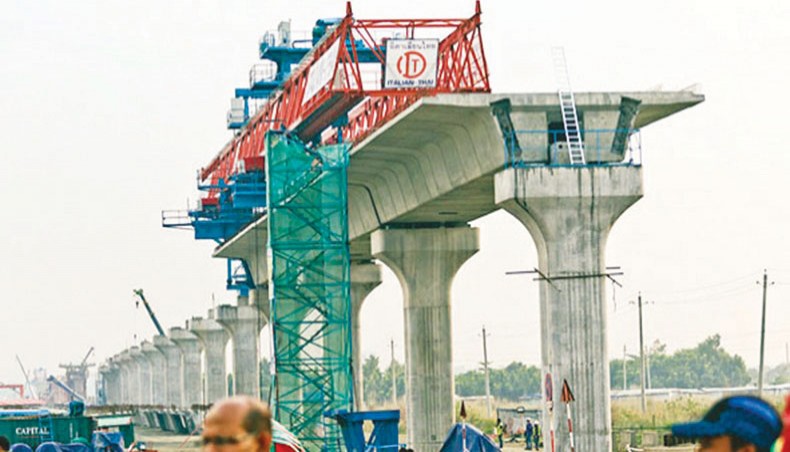 A file photo shows pillars and a span of under construction infrastructure of metro rail. Implementation of the annual development programme hit a 10-year low to 23.89 per cent in the first half (July-December) of the current fiscal year 2020-2021 due to a slow progress in development activities amid the COVID-19 outbreak-induced economic slowdown. — New Age photo

Implementation of the annual development programme hit a 10-year low to 23.89 per cent in the first half (July-December) of the current fiscal year 2020-2021 due to a slow progress in development activities amid the COVID-19 outbreak-induced economic slowdown.

The government’s ADP implementing agencies managed to spend only Tk 51,266 crore in July-December of FY21, lower Tk 5,930 crore or 2.7 per cent from that of Tk 57,196 crore spent in the same period of the FY 2019-20, according to planning ministry’s Implementation Monitoring and Evaluation Division data.

In July-December of FY20, the agencies executed 26.59 per cent of the total allocation for the fiscal year.

Since the FY2011, the previous lowest implementation rate was 24 per cent in the first six months of FY16, the IMED data showed.

Half-yearly ADP implementation data was not available for the fiscal years before FY2011.

In December 2020 alone, the ADP implementation progress dropped by 1.39 per cent or Tk 3,016 crore from that of the same month of the previous year.

The government set the target of spending Tk 2,14,611 crore to execute development projects in FY21.

The 58 ADP implementing agencies, including ministries and divisions, will have to spend Tk 1,63,345 crore or 76.11 per cent of the allocation in the remaining six months of the year to achieve the target.

Officials said that the overall progress in ADP implementation remained slow as the construction of mega projects, including Padma Bridge, Dhaka Metro Rail, and activities of ministries and divisions with higher allocations were almost suspended in the first quarter of the fiscal year.

In most cases, the development activities have yet to get full momentum amid an economic slowdown due to the coronavirus outbreak and the fear of the second wave of infection, they said.

They hoped that the progress would get pace once the COVID-19 situation comes under control as the country is set to start vaccination from early February.

Of the agencies, the shipping ministry implemented the lowest, 12.51 per cent, followed by the civil aviation and tourism ministry 13.52 per cent and Health Services Division 14.63 per cent of their respective allocations in the six months.

Bridges Division and Road Transport and Highways Division, which are responsible for the construction of the Padma Bridge and Dhaka Metro Rail projects respectively, managed to spend 19.80 per cent and 23.26 per cent respectively of the funds allocated to them.

The religious affairs ministry implemented the highest, 72.16 per cent, of its allocation followed by the IMED 52.91 per cent and Election Commission Secretariat 42.15 per cent.

Internal Resources Division spent the lowest, 1.75 per cent, followed by Financial Institutions Division 7.03 per cent in the period, the data showed.