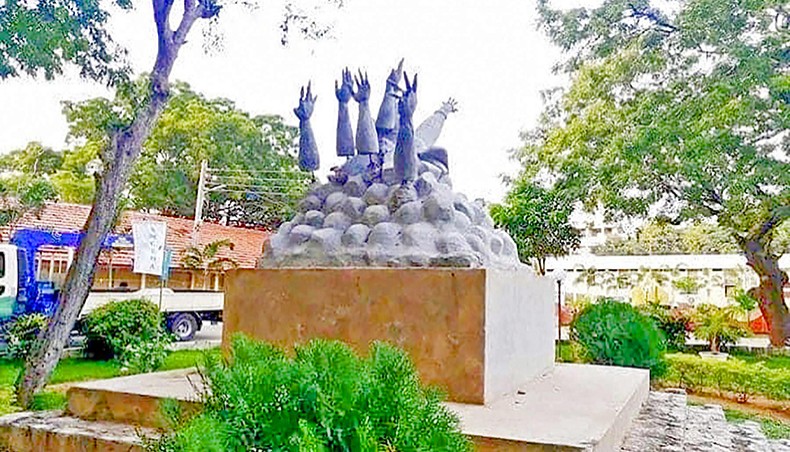 An undated photograph received on January 11 shows a general view of a war memorial in the Jaffna University before it was demolished in Jaffna. — Agence France-Presse

JUST over a year after president Gotabaya Rajapaksa took over the reins of governance, which the 20th amendment to the constitution has strengthened, the red lights are beginning to flash even as the New Year gets under way. There has been a continuing expectation that the president will be true to his early pledge, made at the sacred site of the Ruvanvelisaya built by the great king Dutugemunu, that he would be the president of all Sri Lankans and to rule justly. The president’s popularity remains high amongst the general population. However, contradicting expectation of enlightened governance there has been a surge in acts and words of hate that are not conducive to a healthy polity that heals itself of the conflicts that have for long held it back from reaching its fullest potential.

As the old year came to a close it seemed as if the country was coming to an adjustment with regard to the divisive issue of the government’s cremation-only policy with regard to COVID-19 deaths which has aggrieved the Muslim community. Increasing numbers of medical professionals and political groups had given their assent to burial as an option. Senior clergy of all religions issued statements that the right of burial on religious grounds should be accepted in view of international practices and the opinions of scientific opinion within the country. In this context it is unfortunate and rationally inexplicable that the government has continued to hold to its rigid position that insists on COVID-19 cremation only.

The government’s decision to postpone provincial elections has offered the country time and space to focus on development issues that can unify the country, rather than on highlighting differences between communities in order to get their votes. Elections have invariably been a source of division in Sri Lanka as politicians seek to generate vote for themselves. The postponement of provincial elections puts a greater responsibility on the government as it has vested the responsibility for controlling the affairs of the provinces to itself. Therefore there is need for a mechanism to be developed to reduce tensions and improve harmony. However, contrary to this expectation, there are efforts being made to take the country deeper on the path of internal conflict.

THE spike in internal polarisation has been most pronounced in the area of inter-community relations. An example would be the issue of grazing land in Batticaloa. Thousands of acres of fallow land have been traditionally used by Tamil and Muslim farmers as pasture land for their cattle. However, during the past year or so this land is being parcelled out to farmers from the Sinhala community. This is leading to conflict between the communities. The grazing issues had been highlighted for almost a year and but do not appear to have received adequate attention of the government authorities, which is unfortunate. The failure of the government to resolve issues as they arises and mitigate the negative impacts will lead to an increase in animosities and misunderstanding between the communities, and an erosion of confidence in the fairness of the government on the part of the affected ethnic minorities.

The increase in internal conflict does not bode well for Sri Lanka with the March session of the UNHRC just six weeks away. The issue of the government’s unilateral withdrawal from the resolution that the previous government co-sponsored in 2015 will figure in the deliberations of that body. It is likely to be a difficult discussion for Sri Lanka because most of the commitments made by the previous government were not fulfilled by it and continue to remain unmet. As the UNHRC resolution focused on issues of the three decade long war, and particularly on its last phase, the sudden government action of bulldozing the only public monument in the country to the civilians who lost their lives in the last battles, which is within the University of Jaffna will serve to refocus local and international attention onto those traumatic events of the past.

The issue of remembering the past has been a source of division within the country. The government has built many memorials to the military personnel who lost their lives and has set aside days for their commemoration. However, it has been rigid in its stance that the LTTE should not be memorialised in any way, and even bulldozed their cemeteries. The government’s concern about possible bids to revive the LTTE is justifiable. The issue at stake with the Jaffna University monument is that it was for those civilians who lost their lives in the last battle as they were trapped on the battlefield. Those who lost their lives and were buried are the kith and kin of the Tamil community regardless of whether they were members of the LTTE, forced recruits, or just civilians. They needed a memorial and believed that one set up within the university would be safer than one put up anywhere else.

MEMORIALISATION is a part and parcel of any human society. It is the care and concern that family members have for one another that lays the foundation for a healthy and united society. The never dying love of family members for their departed ones is a reason why there are so many monuments for fallen soldiers to be found throughout the country, some of which are put by the government but many more put up by the war affected families. There are also monuments within the universities put up by students for those who lost their lives during the JVP insurrections of the past. Those memorials have been permitted to continue to remain though put up without official permission. The memorial within Jaffna University that was suddenly destroyed over the weekend can be considered as part of this tradition.

The demolition of the memorial within the university immediately led to a polarising situation and to a call for a shutdown of the Northern and Eastern provinces. Fortunately better counsel, even from within the ranks of the government, has prevailed and the vice-chancellor who issued the order for the removal of the monument has assured that a new one will replace the one that was destroyed. But the general strike that was planned would have already mobilised the sentiments of the Tamil community in opposition to the government and also refocused local and international attention on the issue of what happened at the war’s end. The issue of memorialisation is not limited to the university students but affects all in the Tamil community regardless of whether they directly lost anyone in the war. There is a bonding that comes from primordial identities of race and religion that overrides individual differences. The government needs to act urgently to defuse the growing crisis.

The ancient chronicle, the Mahavamsa, records that when King Dutugemunu won the final battle against his foe King Elara, whom he wished to defeat from childhood, he ordered a memorial to be built for him. The great king, and the ancient chroniclers, recognised two millennia ago that those defeated in battle and who lost their lives in large numbers needed to be comforted and given an opportunity to mourn. The tradition was so strong that centuries later another king fleeing from his foes got off his horse and walked past the monument to King Elara as decreed by King Dutugemunu. Sri Lankans are proud of our culture and traditions and rightfully so. The need today, and urgently so, is to draw on the best elements of the past to live better lives in the present and pave the way for a shared future in a country in which every prospect pleases. A new monument that remembers the loss and pain of the past, and which inspires a feeling of never again will hopefully come from the ruins of the old one.