On the Tiananmen Square protests 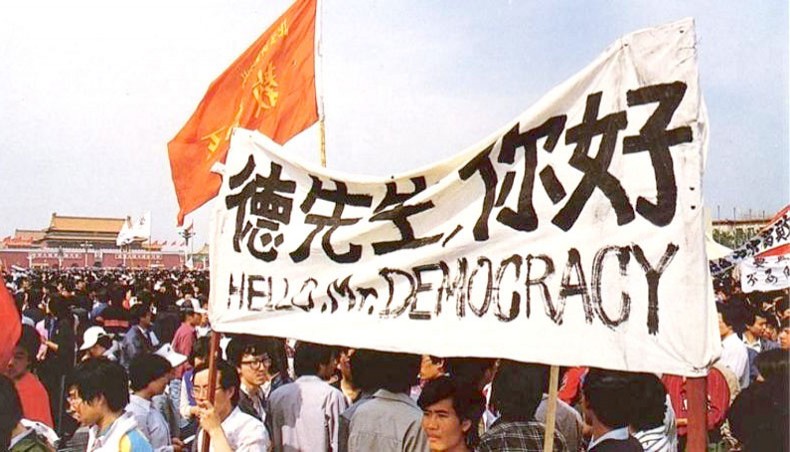 IN DECEMBER 2020, the Japanese press published classified diplomatic documents that were made in preparation for the 1989 G7 Summit, which took place in Paris on July 14–16. These documents show that already at that time there was a crack in the informal bloc of countries, which is still often referred to by the generalised term the west.

A major disagreement between Japan and the other G7 participants has arisen over changes to the original agenda of this calendar event. They, for their part, were introduced because of the sudden need to outline the G7 position on the measures taken in early June 1989 by the People’s Republic of China leadership to resolve the acute internal political crisis, which gradually escalated from mid-April to early June. In the aftermath, everything that accompanied this crisis became known as the ‘Tiananmen Square protests.’

To recall what exactly we are talking about. During the above-mentioned period of time in 1989, demonstrations were held in Beijing’s main square, the participants of which were guided by a wide variety of motives and ideas, of which the conditionally ‘pro-democracy’ ones were professed by groups of students of the capital’s universities.

Apparently, the organisers of the global ‘perestroika’ with its subsequent ‘end of story’ included the demolition not only of the USSR, but also of China. In this regard, we note that in some texts back in the late 1970s the term ‘reconstruction’ referred to a certain global process, only an important element of which was the task of radically reformatting the USSR and China.

However, Beijing has found leaders worthy of the centuries-old history of its great country. In order to end the unrest, the army was deployed on the night of June 3–4, 1989. Several hundred people, including dozens of soldiers, were victims of the clashes that erupted. The latter, as well as witness accounts, point to a thoroughly detailed study of the essence of the anti-state rebellion, about the real organisers of which hypotheses of varying degrees of plausibility are still being constructed.

Be that as it may, the drastic measures taken saved China. Meanwhile, the USSR descended into a catastrophe that proved to be one of the worst in the country’s millennial history.

The outcome of the ‘Tiananmen Square protests’ was extremely upsetting for the leaders of the very generalised ‘west,’ which was still showing signs of life at the time. The plan to ‘end the story’ was only half done. The key to its ‘continuation’ was China’s subsequent rapid transformation into a second world power.

The decisiveness of the measures taken by Beijing served as an occasion for the west to express its criticism, which the particularly dissatisfied tried to indicate on the platform of the G7 summit, which gathered one month after the end of the aforementioned ‘events.’

As follows from the just published documents of the Japanese foreign ministry at that time, in the process of preparing the final joint statement of the next G7, Tokyo initially opposed not only the inclusion of sanctions measures against China, but also any mention of these ‘events’ themselves.

In doing so, the Japanese leadership was guided by two main considerations. First, these measures could lead to the political (self-) isolation of a rapidly developing country, reducing the space for external influence on it. Secondly, it was rightly believed that with the Japanese economy starting to stagnate, it was too costly to lose the huge Chinese market for manufactured products.

Under pressure from the other six G7 participants, the Japanese delegation agreed to some palliative wording in the final document. A year later, however, Japan abandoned any sanctions against China. A similar path was soon followed in the United States and Europe.

The split in reaction to the aforementioned ‘events’ in the PRC by the main components of the west (Japan, Europe and the United States) was perhaps the first bell that rang in this particular category itself. Since then, each of these components, while rhetorically committed to certain (no less fake) ‘western values,’ has been increasingly engaged in its own political games.

The most recent evidence of this was the signing of the Mutual Investment Agreement on December 30, 2020. One can understand Beijing’s barely concealed jubilation at the positive conclusion of many years of negotiations on the subject, which seemed to have no end in sight. Equally understandable is Washington’s bitter disappointment. Matthew Pottinger, national security advisor to the presidential administration, reported about the ‘overwhelming impression’ that the news of the agreement made in the United States.

By the way, for the author of this article, this fact itself was quite a surprise. The New Eastern Outlook has repeatedly drawn attention to the seriousness of the problems in relations between China and the EU, which, however, did not disappear completely with the conclusion of this agreement.

Note that the increasingly obvious collapse of the west is by no means a consequence of the activities of certain bearers of ‘ill will’ or ‘stupidity,’ ie the notional ‘Xi Jinping-Putin’ and ‘Trump.’ This process is no more than one manifestation of the radical shifts that have been taking place over the past three decades on the global political map.

That is why, in fact, it is highly doubtful that anyone (for example, the new president of a leading world power) would be able today to ‘return everything to the way it was before.’ It is not at all obvious that such an intention will be shown at all (despite the pre-election rhetoric) by the new American leadership. Notable in this regard is the prediction by Jan N Bremmer, founder of the Eurasia Group consulting company, stating that the US will no longer serve as the ‘world’s sheriff.’

Note, by the way, that the worse things get in the generalized West, the more aggressive the attempts to bring its own problems to the international arena become. This includes organising an increasingly fierce propaganda war against China and Russia, in the course of which even lowbrow information attacks are initiated, involving more or less random freaks (both in China and Russia).

An important consequence of the ‘Tiananmen Square protests’ was Beijing’s awareness of the current-situational nature of the previous period of China’s political rapprochement with the United States and quarrels with the USSR, largely (but not entirely) determined by the realities of the Cold War. In essence, these ‘events’ ushered in a new period in Sino-Russian relations. The need for their further successful development was confirmed by the leaders of both countries during their mutual greetings on the occasion of the New Year 2021.

This does not necessarily mean giving a confrontational and anti-western orientation to Sino-Russian cooperation. Moscow and Beijing retain their own preferences in their relations with each component of the west. So far the only point is that the coordination between China and Russia should completely rule out the possibility of carrying out the same kind of combination that during the Cold War led to a confrontation between China and the USSR.

However, in case of the prospect of increased pressure on Moscow and Beijing (both at once or in turn) by all the components of the west (for example, on the platform of the forthcoming NATO summit, whose area of responsibility is expected to move beyond the Euro-Atlantic) the task of forming a full-fledged political-military-economic alliance between China and Russia may turn out to be quite relevant.

In this regard, it would be very appropriate to organise a Sino-Russian summit in the timeframe of the NATO event mentioned above. It seems desirable for India and Japan to move to a ‘neutral ground’ in the current international political field, and both Moscow and Beijing should contribute to this in any way they can. But this will not be easy, given both objective reasons and the presence in Indian and Japanese politics of serious forces that are aimed more at confrontation with China. Both of these circumstances are also discussed more or less regularly in the New Eastern Outlook.

Finally, we note the strange impression made by the military activism (with obviously anti-Chinese overtones) in the Indo-Pacific region of the leading European countries. It is still unclear how this fact and the aforementioned agreement are intended to combine Europeans in a single, more or less consistent strategy.

Or do they, like magicians on a stage in front of the grinning audiences, make unrelated, mesmerising political passes? But if so, what for?

However, these questions may not be correct at all, because it is possible that different EU bureaucratic offices form their own ‘passes’ without considering it necessary to coordinate it with the ‘creativity’ of the neighbouring one.

In this case, Brussels’ entire foreign policy process can be described in the words of a movie character: ‘I fight because I fight.’

New Eastern Outlook, January 11. Vladimir Terehov is an expert on the issues of the Asia-Pacific region.