Between the cup and the lip 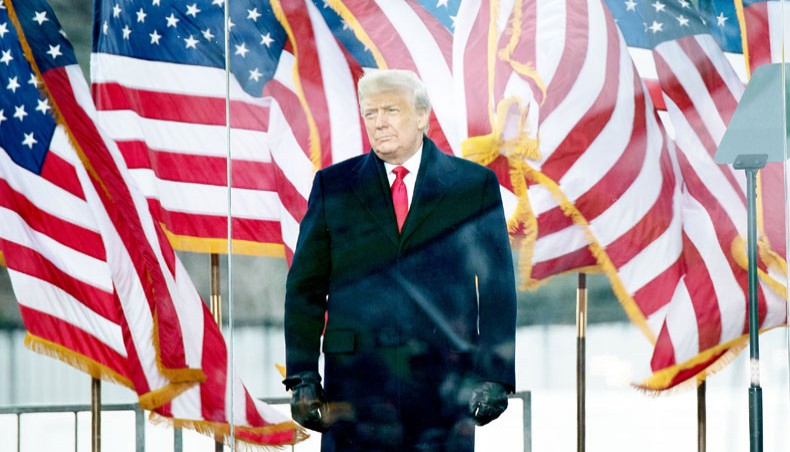 US president Donald Trump arrives to speak to supporters from The Ellipse near the White House on January 6, in Washington, DC. — Agence France-Presse/Brendan Smialowski

The world is waiting out the fraught days before Joe Biden can put the doomsday trigger out of reach of the ‘unstable’ Trump. The white supremacist hero is adulated by the global right as was evident from the Indian prime minister’s full-throated endorsement of his candidacy for a second term, writes Jawed Naqvi

IT’S still a week to go before Donald Trump demits control of the nuclear codes, and renowned US whistleblower Daniel Ellsberg is seeing mischief afoot in the Gulf. With Iran as a potential target of the defeated president’s sublimated rage, Nancy Pelosi has shared the larger concern with the US army, but there’s little news about what the military’s response was or is likely to be should the dire warnings inch closer to a feared denouement. Pelosi discussed with chairman of the joint chiefs staff Mark Milley ‘available precautions for preventing an unstable president from initiating military hostilities or accessing the launch codes and ordering a nuclear strike’.

The world is waiting out the fraught days before Joe Biden can put the doomsday trigger out of reach of the ‘unstable’ Trump. True to form, Trump plans to fly away to Scotland a day before Biden’s January 20 inauguration. The white supremacist hero is adulated by the global right as was evident from the Indian prime minister’s full-throated endorsement of his candidacy for a second term. There’s no dearth of other clones around the globe or of those who see in Trump their role model.

It is quite likely that other than dodging inevitable criminal cases he would be slapped with and the barrage of legal probes expected to be ordered into his dodgy tenure, Trump hopes to use the overseas stay to keep the racist pot boiling. His American fans and other right-wing groups across the world will hang on to every word he utters to pliable or conniving TV anchors.

The delusional right-wing assault on Capitol Hill by men and women smitten to death by Trump’s fantasy world — which he conjures like a magician — may seem ordinary by the United States’s own standards. As the wag said: ‘Given travel restrictions in view of the pandemic, the US had to stage this year’s coup in Washington, DC.’ Another gleefully offered a rejoinder. ‘The coup failed because there were no US embassies in America.’

It was the US that applauded Boris Yeltsin in a similar but more successful endeavour at murdering democracy. It was only 30 years ago that Yeltsin was guided by US intelligence to bombard the Russian parliament in a fatal assault on his rivals, the communist deputies in the Duma. Yeltsin deployed tanks and heavy weapons to blow up his own parliament. US intelligence helped him break into the Russian military communications channels, according to Seymour Hersh’s 1994 revelations of the US-aided coup.

As soon as the deputies staged their resistance to Yeltsin’s pro-market reforms on August 18, 1991, and moved to impeach him, the National Security Agency, according to Hersh, was able to decrypt conversations between the two leaders, Vladimir Kryuchkov, chairman of the KGB, and Dmitri Yazov, the defence minister, taking place over a supposedly secure landline. President Bush, himself a former CIA chief, ordered the information to be given to Yeltsin. However, according to Hersh, fearing Russian reaction if word of American interference leaked out, Bush broke the law by not telling Congress. Bush in a parallel move also set into motion the dismantling of the secular and pro-Moscow Arab structures, inflicting the first military defeat on Saddam Hussein.

Why should it surprise that Mike Pompeo, considered the author of Trump’s anti-Iran military build-up, also has his roots in US intelligence? He became secretary of state after a stint as head of the Central Intelligence Agency. Consider it a curious irony in the end that Donald Trump, who seemed to loathe US agencies and had nothing nice to say about the CIA or any other outfit, became so dependent on the machinations of the deep state. How would that change for Biden?

Daniel Ellsberg described in The Guardian recently the increased danger of a US military assault on Iran under Trump’s supervision. The move, if it comes about, would have the fingerprints of Benjamin Netanyahu and his powerful ally, Mike Pompeo.

‘President Trump’s incitement of criminal mob violence and occupation of the Capitol makes clear there is no limitation whatever on the abuse of power he may commit in the next two weeks he remains in office. Outrageous as his incendiary performance was on Wednesday, I fear he may incite something far more dangerous in the next few days: his long-desired war with Iran,’ Ellsberg wrote.

Ellsberg reports the dispatch a fortnight ago of B-52’s nonstop round-trip from North Dakota to the Iranian coast. He says it was the fourth such flight in seven weeks, one at year’s end — along with his build-up of US forces in the area. It is a ‘warning not only to Iran but to us’.

According to Ellsberg, by mid-November, as the B-52 flights began, Trump had to be dissuaded at the highest levels from directing an unprovoked attack on Iran’s nuclear facilities. But an attack ‘provoked’ by Iran (or by militias in Iraq aligned with Iran) was not ruled out. The ruse wouldn’t be too different from the one proposed by the Cheney-Rumsfeld duo in the junior Bush’s administration.

US military and intelligence agencies have frequently provided presidents with false information that offered pretexts to attack the US’s perceived adversaries, says the author of the Pentagon Papers. It is not unusual for US militaries to suggest covert actions that could provoke the adversaries to some response that justifies US ‘retaliation’.

Ellsberg refers to the assassination of Mohsen Fakhrizadeh, Iran’s top nuclear scientist, in November, and the killing exactly a year ago of general Soleimani. Iran didn’t rise to the bait.

Trump is running out of time to generate the ruse to block resumption of the Iran nuclear deal by the incoming Biden administration. ‘US military and covert planning staffs are up to the task of attempting to meet that challenge, on schedule.’ Powerful interests rather than the constellations may want the teacup not to reach the lip.