Regime Change within the Empire

Utterances in US capitol 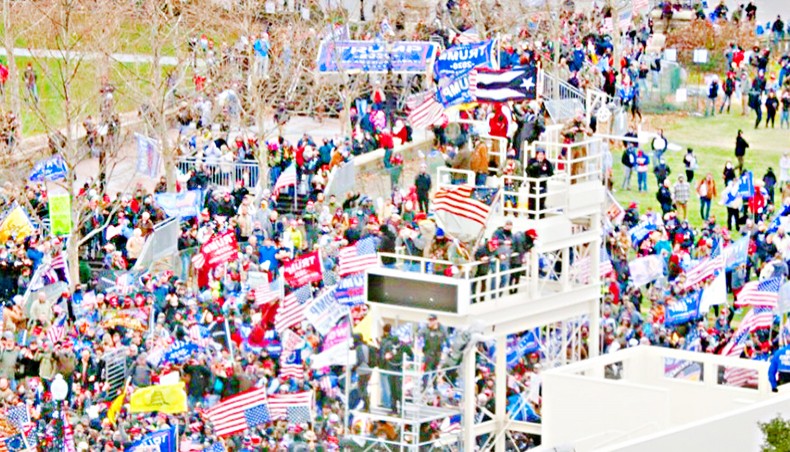 HUNDREDS of protesters breached the US Capitol on January 6, forcing lockdowns as the US Congress was convening a joint session to count the certified 2020 Electoral College votes. The entire episode, although with a few gaps, was in the mainstream media. Death number and arrests accompanied. There’re some more things. What came out was an exhibition of bourgeois politics. A part of a show of regime change in an advanced bourgeois democracy it was, also.

Some of the protesters breached hallways, offices and even the Senate chamber, forcing evacuations. Others broke windows to get inside. Capitol police had to draw guns inside in an armed standoff near the door to the House floor. Lawmakers were instructed to put on protective gas masks because police had deployed chemical irritants in Statuary Hall. They were told to lie down on floor.

In total four people died, and more than 50 were arrested during the series of incidents, according to the MSM. Washington DC wide curfew was imposed.

According to some media reports, Trump, who had spoken at a rally of his supporters earlier in the day urging demonstrators to surround the Capitol, was reportedly watching the mayhem unfold from the White House dining room. Trump released a video telling demonstrators to ‘go home.’ The video was subsequently blocked by Facebook and Twitter.

The mayor of Washington, DC has extended the public emergency order for a total of 15 days to beyond January 20.

Senator Mitt Romney, R-Utah, addressed his colleagues on the Senate floor after it reconvened on the evening of January 6: ‘What happened here today was an insurrection incited by the president of the United States.’

No confusion, please. ‘[A]n insurrection incited by the president of the United States.’ A senator makes the claim, and a senator can never be irresponsible, at all irresponsible, neither in his words nor in actions.

Leaders Mitch McConnell and Chuck Schumer each condemned the actions of Trump supporters. Schumer repeatedly referred to those who breached the Capitol as ‘thugs.’

A president assembles ‘thugs’ to charge the legislative assembly!

Senator Kelly Loeffler, R-Ga., said: ‘The violence, the lawlessness and siege of the halls of Congress are abhorrent…’

Oh ho, violence goes on there!

Mike Pence, the vice president returned to the Senate floor on the night of January 6 and said: ‘Today was a dark day in the history of the United States Capitol.’

A dark day it is. Is it a bolt from the blue? How was it engendered? All on a sudden, by a single person? No source, nothing behind this ‘dark day’?

Barack Obama, the former president of US in a statement presented an explanation to the questions: ‘History will rightly remember today’s violence at the Capitol, incited by a sitting president who has continued to baselessly lie about the outcome of a lawful election, as a moment of great dishonour and shame for our nation. But we’d be kidding ourselves if we treated it as a total surprise.’

Jim Mattis, Trump’s former defence secretary, said in statement: ‘Today’s violent assault on our Capitol, an effort to subjugate American democracy by mob rule, was fomented by Mr Trump. His use of the presidency to destroy trust in our election and to poison our respect for fellow citizens has been enabled by pseudo political leaders whose names will live in infamy as profiles in cowardice. […] Mr Trump will deservedly be left a man without a country.’

Nancy Pelosi, the House Speaker whose office on Capitol Hill was among those overtaken by Trump’s supporters, sent a letter to colleagues: ‘Today, a shameful assault was made on our democracy. It was anointed at the highest level of government.…’

She said: ‘We now will be part of history, as such a shameful picture of our country was put out to the world, instigated at the highest level.’

No doubt that all — persons, processes and incidents — will be part of a history — the history of politics of a group in a particular type of democracy in a declining empire.

In a statement, the former president George W Bush said: ‘Laura and I are watching the scenes of mayhem unfolding at the seat of our nation’s government in disbelief and dismay. It is a sickening and heartbreaking sight. This is how election results are disputed in a banana republic — not in our democratic republic. I am appalled by the reckless behaviour of some political leaders since the election and by the lack of respect shown today for our institutions, our traditions, and our law enforcement. The violent assault on the Capitol — and disruption of a Constitutionally-mandated meeting of Congress — was undertaken by people whose passions are inflamed by falsehoods and false hopes. Insurrection could do grave damage to our nation and reputation. In the United States of America, it is the fundamental responsibility of every patriotic citizen to support the rule of law. To those who are disappointed in the results of the election: Our country is more important than the politics of the moment.’

On January 6, in a statement, the US president-elect Joe Biden said, ‘It’s not a protest. It’s an insurrection.’

On January 6, a joint statement issued by the Senate Minority Leader Chuck Schumer and House Speaker Nancy Pelosi said: ‘We are calling on president Trump to demand that all protestors leave the US Capitol and Capitol Grounds immediately.’

To push out protestors, the president is needed!

The US representative Mike Gallagher, R-Wis, told CNN: ‘I haven’t seen anything like this since I was deployed to Iraq in 2007 and 2008. This is America and this is what is happening right now.’

There is nothing to disagree with the comparison. Regime change in Iraq had a different style. Iraq witnessed intrigues, cruise missiles, bombardments, and killings — a shower of brutality. That was not the factional fight of the Empire’s ruling classes. That was a pure and unadulterated imperialist aggression.

Mitch McConnell, the Senate Majority Leader excoriated his Republican party colleagues: ‘If this election were overturned by objections from the losing side, our democracy would be in a death spiral.

‘We cannot keep drifting apart into two separate tribes with a separate set of facts and separate realities.’

Has not that spiral already begun? What does the process and incidents tell? The spiral will appear stark if an insight is thrown at the core.

In a rally prior to charging of the capitol, Trump’s personal attorney Rudy Giuliani said, he wants a ‘trial by combat’ over the election results.

‘Combat’ turns out as a word of politics that relies on constitutionality.

According to a news report, ‘[a] newly elected lawmaker from West Virginia was among the hundreds of people who stormed the Capitol building on Wednesday. Republican representative Derrick Evans posted a now-deleted livestream video to Facebook that shows him moving through the building as people in Trump hats mill about.

‘In one video posted on the morning of January 6, Evans can be heard saying ‘Stop the steal baby.’’

A lawmaker storming the Capitol!

Another news-report said: ‘A Virginia state senator’s storming of the US Capitol signalled the beginning of a ‘revolution.’

‘In a Facebook live post broadcast hours after speaking at the DC rally that preceded the riot, Virginia state senator Amanda F Chase said supporters should not believe media reports of riots at the Capitol, as ‘most of it’s not even true.’

Chase said, she saw the rioters as ‘many patriots that have already said we’ve had enough.’

‘I support peaceful protests,’ she said in the post Wednesday night, ‘but I’m telling you when you back people in Virginia and across the United States of America into a corner, you will end up with a revolution. And I believe that’s what you’re starting to see.’

So, there’s change in narratives that carries meaning. It is also significant.

Why a person makes such a claim? Is it from thin air?

Why is there such a rage? Why a president invites such persons to charge a legislative assembly?

According to other news-reports, ‘[b]y late afternoon, an almost festival atmosphere prevailed outside the Capitol: participants celebrated the storming of the building and traded stories about getting tear-gassed. Vendors sold popcorn and pretzels, and some departing participants rode off in bicycle rickshaws.

‘Several participants carried sign saying, ‘Election fraud is treason’. They declined to specify who they believed should be punished, but pointed out a nearby gallows. Closing in on 4 p.m., thousands of participants streamed away from the Capitol building, many laughing and jeering the politicians they had intimidated.

Gallows? For whom the gallows await?

Chad Heuer (45) said, he travelled from southern Michigan to watch Trump speak because he wants members of the Congress to listen to what Trump supporters say. ‘We have a constitution. Let’s uphold it,’ Heuer said.

Michele Haynes from Las Vegas, unwilling to accept the reality that Joe Biden will become president, said she’s ‘sure there are other options’ for Trump to remain in office regardless of what happens in the Congress. She said Americans won’t accept Biden as president. ‘They have more,’ she said of allegations of voter fraud. ‘It’s going to be revealed.’

Sherri Lynn Womack, a member of the Lee County board of education in North Carolina, said she travelled to Washington to demand better election security and stronger voter ID laws. She cited what she believes are ‘suspicious’ videos of ballot counting in Georgia. ‘I’m not one of those conspiracy theorists,’ she said. ‘But these are legitimate questions that need to be asked.’

David Tate (32), a truck driver from New Hampshire, said he drove 14 hours because he doesn’t want his three children to grow up under a Biden administration. He said he doesn’t believe Biden could have gotten the amount of votes he did because of the massive crowds Trump drew compared to the smaller events held by Biden. ‘It’s kind of our right and our duty as American citizens to stand up against this naked treason,’ he added.

Among those on the National Mall was Angela Strong (41), a sixth-generation Texan who said she had ancestors on the Mayflower and others who fought in the Civil War. ‘If they were willing to sacrifice everything to defend liberty and freedom, I could come down to support the cause for freedom’. She said debate has been stifled in America, and people who disagree can’t have a conversation without arguing.

Strong said she couldn’t speak to Trump’s claims of voter fraud because Texas was not that close of a race, but added that concerns raised by people in other states such as Pennsylvania should be heard. Experts have agreed, however, that there is no evidence of widespread voter fraud in Pennsylvania or elsewhere. ‘If their citizens and legislators are questioning it in any contested state, it shouldn’t be ignored,’ she said. ‘We have to give those voices the opportunity to say how they feel and why it is they feel that way.’

What do these voices mean? Are these to be ignored or not? What do these voices signify? What’s the identity of these voices? Do they represent anything? Alternatively, are they nothing more than a bunch of individuals? Are the utterances, official and unofficial, establishment and non-establishment, to be considered for an analysis of the state of the Empire? Whatever is done — taken into account, analysed or ignored — a part of regime change in the Empire has come out in front of the audience of mainstream media around the world, and it is not that joyful. Rather, it says some disease is there, which will resurface repeatedly until they are fully cured.

Author’s note: All descriptions/quotes/citations/references are from the mainstream media, and almost all have been quoted directly.