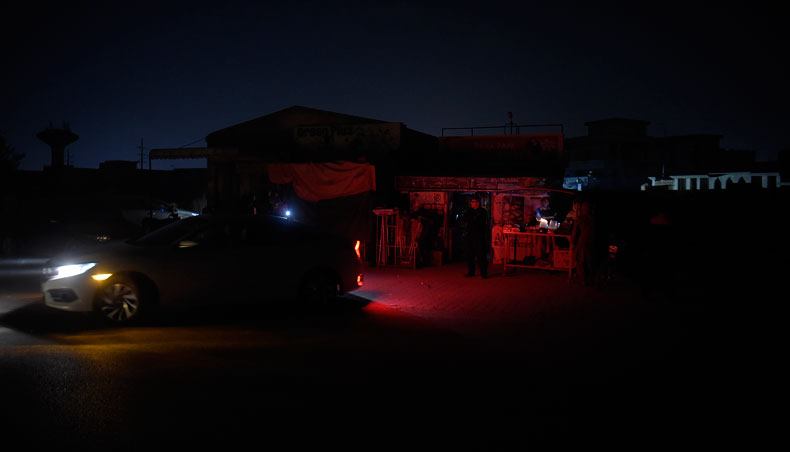 People gather outside shops during an electricity shutdown in Rawalpindi on January 10, 2021, while the restoration efforts were under way after a major power breakdown in the country. — AFP photo

Power supply was restored across Pakistan on Sunday after the country was hit by a massive electricity blackout, officials said.

The electricity distribution system in the nation of more than 210 million people is a complex and delicate web, and a problem in one section of the grid can lead to cascading breakdowns countrywide.

The latest blackout, which lasted roughly 18 hours in most areas, was caused by ‘an engineering fault’ in southern Pakistan at 11:41pm local time on Saturday, which tripped the system and caused power plants to shut down, power minister Omar Ayub Khan told a press conference in Islamabad.

Experts were however trying to determine the precise details of what happened as well as ‘the exact location of the fault,’ the power minister said, adding that it would take time as the area was still covered in dense fog.

A spokesman from the National Transmission and Despatch Company reported that ‘all 500KV and 200KV grid stations and transmission lines have started supplying electricity’ and that ‘the power supply has been restored across Pakistan.’

‘Power breakdown in Pakistan is blackmailing Imran Khan,’ tweeted Musarrat Ahmedzeb in reference to the prime minister’s recent statement accusing Shiite protesters of blackmailing him after the killing of 10 miners.

‘What a start for the new year... let us seek Allah the Almighty’s mercy,’ read another tweet, while a message on WhatsApp said: ‘new Pakistan sleeps in a night mode’.

There were no immediate reports of disruption at hospitals, which often rely on backup generators.

Netblocks, which monitors internet outages, said that web connectivity in the country ‘collapsed’ as a result of the blackout.

Connectivity was at ‘62 percent of ordinary levels’, it said in a tweet.

The outage marked Pakistan’s second major power breakdown in less than three years. In May 2018, power was partially disrupted for more than nine hours.

In 2015, an apparent rebel attack on a key power line plunged around 80 per cent of Pakistan into darkness.

That blackout, one of the worst in Pakistan’s history, caused electricity to be cut in major cities nationwide, including Islamabad, and even affected one of the country’s international airports.