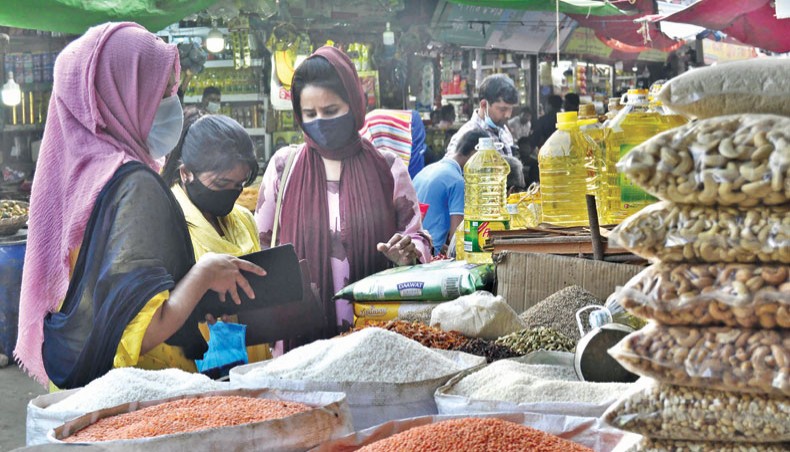 Customers buy rice at a shop at Karwan Bazar in the capital, Dhaka, on January 8. Experts on Sunday said that rice mill owners and wholesalers had raised prices of rice by taking advantage of low stock of food grains maintained by the government and its delayed decision to import the staple. — Focusbangla photo

Experts on Sunday said that rice mill owners and wholesalers had raised prices of rice by taking advantage of low stock of food grains maintained by the government and its delayed decision to import the staple.

At a webinar on the increase of rice price organised by the Citizen’s Platform for SDGs, economists and experts said that rice prices, which had continued to increase since July 2020, had hardly benefitted growers and had instead hit lower income groups and marginal farmers hard.

Experts also blamed government agencies for their faulty paddy output estimations and for missing the targets for paddy and rice procurement set by the government due to the unusual price hike of rice in the country.

They recommended that an agricultural price commission should fix seasonal prices of agriculture products to ensure a win-win situation for the growers and consumers.

‘The stock of food grains maintained by the government is closely related to the prices of rice as poor stock levels give traders the signal that if they increase the prices, the government will not be able to intervene into the market,’ said Quazi Shahabuddin, former director general of the Bangladesh Institute of Development Studies.

He said that the food grain stock had come down to five lakh tonnes in the country whereas the optimum level was 10 lakh tonnes.

He said that farmers were not getting any benefits from the increased rice prices as they sold paddy, not rice.

The rice mill owners and wholesalers were the main beneficiaries of the high prices as farmers sold the food grain at low prices immediately after the harvesting season, Shahabuddin said.

He also questioned the government’s stock management methods, procurement programmes and import decisions asking if the government had taken timely initiatives to keep the prices stable in the country.

‘Every year, we face the same situation over rice prices and listen to the same stories while the growers remain deprived,’ agricultural economist Asaduzzaman said.

The farmers are nowhere near to benefitting from rice price hikes as they have no stock of paddy, he said.

He said that either the production of paddy had fallen in the country or the food grain had got stuck at any stage of the supply chain as the prices had continued to rise in the country from July last.

Despite getting the affirmation of the prime minister, the import of rice is yet to start, he said.

He also said that the rice prices would not have increased if the ministry concerned had begun importing the item two months ago.

Centre for Policy Dialogue distinguished fellow Debapriya Bhattacharya urged the government to set the seasonal prices of agricultural products to ensure fair prices for both the growers and the consumers.

He recommended that an agricultural price commission should be set up for ensuring competitive prices.

Debapriya also suggested that the government should strengthen its procurement programme and monitoring on the market.

Parliament member Emaz Uddin Pramanik blamed the traders for increasing the rice prices in the country.

He said that the government was not responsible  for the rice price hike in the country but the traders and hoarders were out to make extra profits through increasing the prices.

Ultimately, it is the consumers who suffer due to the price hike of rice, Emaz Uddin said.

Md Shahjahan Kabir, director-general of the Bangladesh Rice Research Institute, said that the rice prices were not increasing due to decreased production but due to the fact that a quarter of traders had hoarded large quantities of paddy across the country.

He said that around 30 lakh tonnes of rice would remain surplus in the country by June 30 this year.

There is no reason for a food crisis in the country but invisible forces remain active on the market, Shahjahan.

He hoped that the rice prices would not exceed Tk 50 a kilogram after June 30.

Shaikh Siraj, director of Channel I, suggested that the government should widen the access for more traders to import rice saying that only 29 companies had been given permission to import the item by the food ministry and the limited scope for import might facilitate creation of a syndicate on the market.

He suggested the setting of a standard for rice prices and that it should be fixed at Tk 40 a kg for the coarse variety and at Tk 5052 for the fine variety.

Farmers from different districts joined the event virtually and demanded subsidies on seeds fertilisers so that the production cost of paddy could be reduced.

They said that the farmers were forced to sell their produce at low prices just after harvest as their family expenses depended on the sale of agricultural products.

The aggrieved farmers lamented that they sold paddy at low prices in the beginning of the season and bought rice at high prices at the season-end.