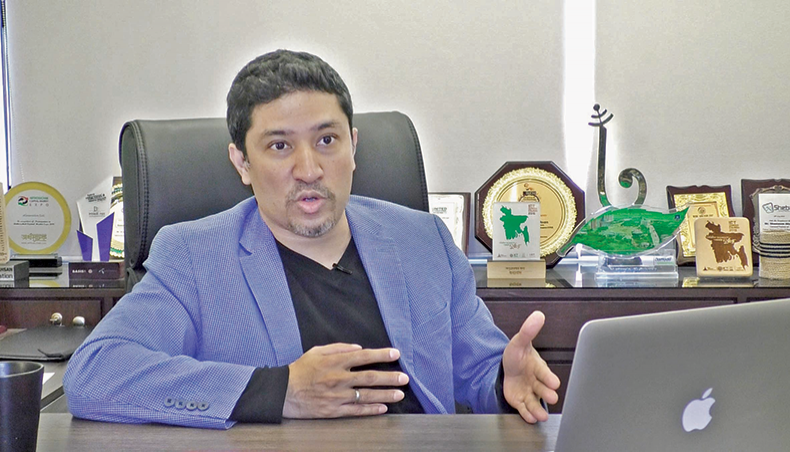 Financing from Bangladesh Bank for information and telecommunication companies through venture capital firms and banks is critical for the ICT sector to overcome funding issues the sector has long been facing, said eGeneration managing director Shameem Ahsan in a recent interview with New Age held at its office in the city’s Gulshan.

Shameem, also a former president of the Bangladesh Association of Software and Information Services, came up with the recommendation as he sees access to finance as the biggest challenge for the sector.

During the interview, Shameem spoke about his views on the ICT sector’s progress, challenges of the fourth industrial revolution along with his company eGeneration’s achievements and future prospects.

Speaking about the struggle of the ICT sector, Shameem, also a general partner of Pegasus Tech Ventures headquartered in Silicon Valley, said that the ICT entities found it difficult to avail credit facility from the banks and other sources in the country.

Speaking about the credit assortment process for ICT firms, Shameem said, ‘These companies usually do not own much tangible assets, including machinery, buildings and land, but their assets comprised of human resources and business track records.’

Investors, bank officials as well as the regulatory bodies should be equipped with mechanisms to evaluate the assets of the ICT firms, ensuring fair evaluation of the ICT companies, said the ICT entrepreneur.

To attract foreign investment to the country’s ICT sector and to help local companies build their reputation on the global arena, the branding of Bangladesh is very vital, he said.

‘It’s not possible for the private sector alone to build the country’s reputation abroad but government bodies, including the Export Promotion Bureau, need to work on this area,’ said the eGeneration chief.

Asked about Bangladesh’s ICT sector, Shameem said, ‘We have made major progress in the last 12 years, specifically in expansion of the fibre optic backbone across the country, widening accessibility of mobile telecom services for all, making revolutionary achievements in mobile financial services and formulation of many ICT-friendly policies.’

On the other hand, there is scope for achieving more, he said.

The ICT entrepreneur said that the country had ample scope for improving egovernance as many government offices still functioned under a paper-based operation system, he said.

In the education sector, the country was lagging behind neighbouring India and Sri Lanka in terms of building human resources for the ICT sector.

Dissatisfied about the biasness shown by the government and donor agencies towards foreign firms, Shameem, also the chairman of Venture Capital and Private Equity Association of Bangladesh, said that foreign firms were given priority in the majority of donor agency-funded projects.

Eligibility conditions are usually set in a way that make it hard for the local companies to fulfil them and make the foreign firms eligible to get the job, he said.

On October 2020, the Bangladesh Securities and Exchange Commission approved eGeneration, a system integration and software solutions provider, to raise Tk 15 crore from the country’s capital market.

Speaking about the purpose behind floating eGeneration’s share on the country’s bourses, Shameem said, ‘Being a publicly listed company actually helps to gain more acceptance on the global forum and to attain the confidence of global investors.’

He also mentioned that the fund raised from the country’s capital market would help eGeneration to attain more financial strength and to enhance its presence on the local market which itself had become a multibillion dollar market.

The former BASIS president said, ‘With the enhanced capacity after enlistment on the stock exchanges,

eGeneration would be able to provide handsome dividends to shareholders as well as lead the country’s establishment as a global IT destination.’

Speaking about corporate values, Shameem said, ‘The motto of our company is to transform Bangladesh into an innovative high-tech nation and to achieve that motto, eGeneration has been investing in many areas of the ICT sector including artificial intelligence, machine learning, internet of things, block chain and cyber security areas which are related to 4th industrial revolution.’

Through relentless efforts in the last 16 years, eGeneration has become one of the leading ICT firms in Bangladesh, Shameem said.

eGeneration has been working for a number of top international technology companies, including Microsoft, Dell, Sysco and UiPath, he mentioned, adding that the entity is not only earning for itself but also saving Bangladesh’s foreign currency as the country used to be fully dependent on foreign firms for these jobs which are currently being done by eGeneration.

eGeneration’s capacity to execute high-end tasks has also helped to build skilled human resources for the sector, reducing the country’s dependency on foreign firms, he said.

‘We do not only work for profit but our focus is rather on utilising tech for good,’ said Shameem, also a former director of the Federation of Bangladesh Chambers of Commerce and Industries.

For instance, eGeneration has developed a fertiliser recommendation software that provides suggestions on how much fertiliser would be required and when in a particular land, he said, adding that the software has helped a large number of farmers to significantly enhance their production capacity from a particular plot of land.

Besides, eGeneration has worked for automation of microfinance organisations, implementation of virtual courts and on providing hospital management solutions, he said.

Mentioning his suggestions for the start-ups, Shameem said, ‘Factors which determine a company’s success or failure include how a team is built to run a business, how products are designed, if the patent of intellectual property is protected well, effective marketing, funding strategy and exit strategy.’

Talking about the country’s prospect in the fourth industrial revolution era, the ICT businessman said, ‘Investments would be very vital to keep ourselves competitive and to emerge as a superpower in the era.’

‘Even the country’s position in the manufacturing sector may face disruption if we fail to up-skill and reskill human resources,’ he said, stressing the need to form a national taskforce on how to react amid the emergence of the fourth industrial revolution along with formulation of a policy in this regard.

Quick implementation of the policy along with launching of massive up-skill programmes would be vital so that the country can take advantage of the upcoming industrial revolution, he said.