Axone: a film depicting what it means to be an ethnic minority migrant in a city 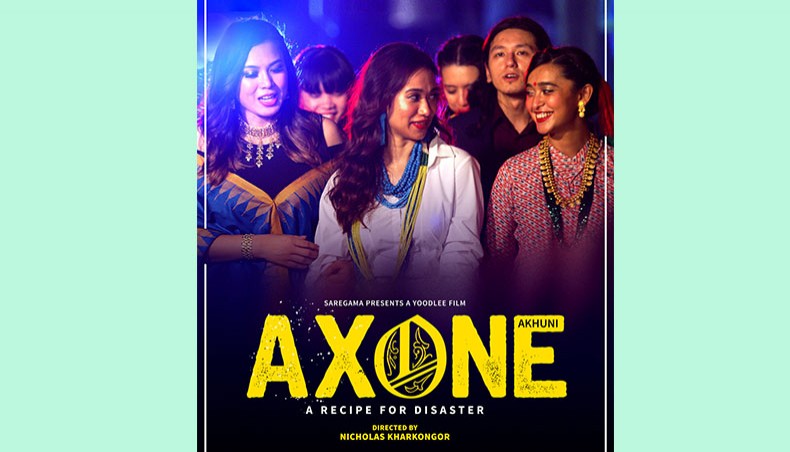 Axone is an Indian drama film directed by Nicholas Kharkongor and premiered at the London Film Festival in 2019. Rajesh Chakma reviews the film

IMAGINE this way, a tribal child goes to its school and a service holder to her/his office situated in Dhaka or any other cities, with a tiffin box carrying ethnic curries made of fragrant spice like Nappi, gets bullied or ashamed by some of their classmates or colleagues.

This incident would teach them that expressing their culture in front of people whether it is their food, their language or their clothes is shameful and they might start hiding parts of their identity. As a result, they might decide to restrict them in what they choose to eat, choose to wear or choose to say. Shaming works! Isn’t it?

Like them, for many, food can be a source of pride as well as shame. Being a Chakma from the Chittagong Hill Tracts, the first step of cooking with Sidol or Nappi (fermented semi-solid dry fish paste) in Dhaka is that I have to make sure, every door or window is locked and secure so that the smell cannot go outside.

It still somehow does, which means answering constant queries, educating people about our cuisine and culture, or sometimes hearing my ‘non-ethnic’ neighbours gossiping to each other, ‘janenna Naapite je shaap, bang, shukor aigula thake! Ai karone to atoo gondho.’ (Don’t you know that Nappi is made of snake, frog, and pork! That is why it smells so badly).

A few weeks back, I saw a similar scene playing before my eyes in Axone: A Recipe for Disaster, a Hindi film that was streaming on Netflix. The movie is a comedy-drama directed by Nicholas Kharkongor that tells a story of a group of friends who hail from Nagaland and Manipur, the north-eastern states in India, and are staying in Delhi to pursue their academic or professional dreams.

It revolves around making a special regional dish axone (pronounced as akhoni) a fermented soybean condiment with pork, by a group of friends to surprise their friend on her wedding day but it delves much deeper and addresses the prejudices and discourses of racism that the ethnic minority migrants face in a big city like Delhi.

The movie opens on a hot summer day in Delhi, tribal drums beating in the background and two young girls Upasana and Chanbi from the north-eastern section are seen in a hurry to complete their secret mission of collecting axone from a nearby place because they want to prepare a special north-eastern dish, axone pork, for their best friend Minam’s wedding. After many struggles, they bring the ingredients, light the stove, shut the window, but it starts stinking to the prejudiced nose.

Before they rented the house, the landlady warned them not to make that stinky food in her house. Their neighbours are also adamantly against it because the dish smells like worse than the smell that comes from the ‘septic tank’. So, when they start cooking and the smell of axone spreads in the building, they got rebuked by the people around them. A tenant even threatens the girls in public for violating the rule of ‘always be like us’.

Apart from the prejudices and stereotypes regarding food, the film also shows violence against people from marginal communities. Like when Chanbi went to the street for buying vegetables, she was both verbally and physically abused by the local men in front of her boyfriend. Her boyfriend Bendang, is afraid of the local people because of his past traumatic experiences and as a result, could not protest and protect her. Later we get to know that, earlier he was brutally beaten up in a crowded market until he became unconscious simply because he coloured his hair.

So, the prejudices and violence and stereotypes like, ‘All of you look the same’ and ‘Can you see the entire wall with such small eyes’, whether it is faced by an indigenous person like ‘myself’ in a city like Dhaka or the north-eastern migrant characters in the metropolitan Delhi in the film is not actually for cooking some kind of stinky food, or having Chinese like face, speaking an ethnic nasal language or wearing ethnic clothes, rather the problem is that they are the ‘other’.

In his famous book, The Road to Wigan Pier, George Orwell explains that smell is a powerful device of class segregation and that is why the lower class always smells unpleasant. Smell as a differentiating factor of the class of a character has also been depicted beautifully in the Oscar-winning Korean film Parasite.

Moreover, in Arundhati Roy’s The God of Small Things, the character Baby Kochamma is very quick to ask how Ammu can stand that awful smell the Paravan Velutha has. So, as Constance Classen has argued in Worlds of Sense: Exploring the Senses in History and Across Cultures, that the ‘otherness’ is always categorised as foul, stinky, or sterile, whereas ‘sameness’ is perceived to be fragrant or deodorised.

So, the characters whether it is the landlady or the tenants or the men who abused Chanbi and Bendang, not only represent the mainstream Indian society but also us (humans) and remind us how we shame people for being different. The director masterfully portrays the reality of racial inequality and the traumatic experiences resulted from the effect of ‘otherisation.’

In the film, there are many glimpses of mental health issues ranging from panic attacks to long-term trauma and stress, suffered by victims of racist treatment and which begets hatred and fear in them of various forms. For instance, Bendang ‘hates the city’. But is everybody in the city against him? Not really. As Chanbi tells her boyfriend that not all are bad, and that how he has never made an effort to interact with anyone outside his community.

The beauty of Axone is that it never gets preachy rather tries to depict a complete picture: what I mean is that, if there are prejudiced neighbours in the colony who are making life difficult for the north-easterners, there is also a friendly Shiv, the landlady’s grandson who is willing to help them to finally cook the food as well as celebrate the marriage ceremony.

As a Chakma person, coming from a remote area of Chittagong Hill tracts, studying in Dhaka from a very tender age, I have also met both types of people who are extremely prejudiced about ethnic cultures and who are welcoming.

For instance, recently, before the lockdown, one of my professors who was taking our post-colonial course at that time, asked me to bring some authentic ethnic dishes to the class. So, I somehow took the courage and bought some authentic Chakma dishes. In the beginning, my classmates were uncomfortable eating my dishes but as our professor started eating those, some of them also tried and they appreciated it.

Therefore, the film Axone breaks the prejudices against the cultures of the ethnic ‘other’ by shedding light on the cultures and the perspectives of the marginal ethnic migrants living in a city. In the end, by showing Bendang finally able to sing a Hindi song and Shiv’s participation in the marriage celebration, the film gives the message of intercultural exchange which often provides a possibility to integrate and negotiate the feelings, such as joy, aggression, hate, fear, and love towards the ‘other’ and create a co-existing social climate.

Rajesh Chakma is a student of Jahangirnagar University.